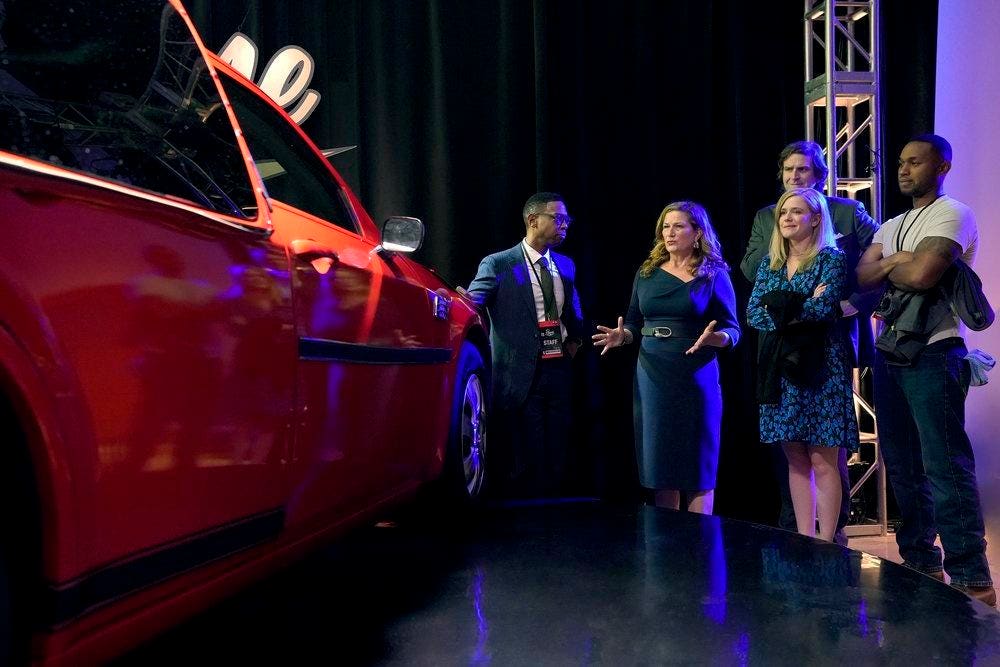 Ana Gasteyer doesn’t really like driving, so it makes total sense that she’d star in a sit-com about cars.

New series American Auto is about the offbeat executives and employees of a major automobile company in Detroit as they try to adjust to a rapidly shifting industry.

Gasteyer plays Katherine Hastings, the new CEO of an automotive company whose bold leadership and business savvy is only slightly offset by her complete lack of knowledge about cars. To keep the company afloat, she must steer a crew of diverse characters and opinions in an audacious new direction.

She explains her reluctance to driving with a story, saying, “My character doesn’t know how to drive. I do drive, but I live in New York City, so I don’t do it a lot, and my family doesn’t like it when I do it. I learned to ride a bike and [then] I forgot how to ride a bike and my husband didn’t believe me [about that] and I got on one, and I immediately ran into a mailbox and hurt myself badly. So, I’m not very comfortable with things on wheels, is what I’m trying to say.”

When it came time to learn to drive, she says, “My mother taught me. I grew up on Capitol Hill in D.C., and she taught me in rush‑hour traffic, with a clutch car, going uphill. So, that might be why I don’t like to drive.”

Gasteyer says that while she’s had great success in her career, she likes to keep doing new things, explaining, “obviously, Saturday Night Live is an insane launching pad. the visibility is just nuts. I mean, you get recognized pretty quickly just for being in that cast. And I’ve worked on Broadway; I’ve worked on television; I’ve worked, you know, wherever I can work. And I like working, so I’ve kept my nose to the grindstone, if you will.

Aside from her driving issues, she says she was drawn to this project because, “I’ve been waiting my entire career to be in my 50s. I’ve been waiting for this part since I was 30. And frankly, 10 years ago, this role wouldn’t have existed, I don’t think. I think just the opportunity to play a female CEO was really exciting to me because I like characters who are, sort of, lost in moral dilemma, and Katherine definitely is. She definitely personifies the aspirations to do right by the company, but maybe not always. It’s a fun gray area, comedically.”

Things didn’t immediately go smoothly for Gasteyer when she stepped into the role. “I flew to L.A., and I had my fitting for the pilot, and we were getting ready to film it when the entire world went into shutdown.”

But, the delay proved to be a bit of a blessing in disguise admits Gasteyer, “We ended up making the pilot last October – 2020 — and then, picked up, and started filming in 2021. So, it was a long, kind of, drawn‑out thing, but kind of nice, in a way, because, as a cast and a community, we did that thing where we established a relationship via text, and over the months and by the time it came to filming, we were really friends, which was fantastic.”

Series creator Justin Spitzer, who also helmed Superstore for six seasons, explained the genesis of the show, saying, “I pitched this show back in 2013. I’d been on The Office for a long time, and I thought I’d love to do a workplace show about the corporate world. And in The Office, they refer to decisions made by corporate, occasionally, and I’d think, like, ‘oh, what’s that show about, and how do those decisions get made?’ The people at corporate aren’t bad people; they’re good people doing their best to try to make the company work, and, sometimes, their decisions have bad effects on the employees, but I thought it would be fun to get to see why those decisions get made. The fact that it’s the auto industry came later. I just wanted it to be about a big multibillion‑dollar American industry.”

Spitzer, says that his cast, which in addition to Gasteyer, includes Jon Barinholtz, Harriet Dyer, Humphrey Ker, X Mayo, Michael B. Washington and Tye White, are welcome to pump up the comedy via improv. “We always like to think of the jokes in the script as a safety net. It won’t get worse than that line, and to whatever extent that the actors can improve it, I always want to encourage that.”

He adds, “That was very important to me, even in casting this. I’ve worked with Jon on Superstore; I’ve worked with Humphrey years ago on another pilot [so] I knew they were amazing improvisers. Obviously, Ana was too, from her years on SNL, and other things. So, I love when the actors beat the jokes that are on the page; to make it the best joke.”

Gasteyer points out that the concept that in a workplace comedy the troupes of the ensemble of characters and the workplace being the star was part of the attraction for her. ‘[I like] not having to carry something so much all by myself. I love working with other people. So many of us come from improvisation and ensemble backgrounds, that it’s critical that you work as a team. That’s actually what ends up being the most fun.”

Another factor that’s important to Spitzer, he says, is having diverse characters because, “it allows you to do more kinds of stories, especially in a show like this, that deals with issues.”

Washington, who is Black, says that with regards to this the traits of his character were very important to him, explaining, “I was drawn to the fact that Cyrus is a very smart, educated corporate executive who’s allowed to be the smartest one in the room, for good or for bad, whether he puts his foot in his mouth, or not, and all the comedy that ensues from it. Getting to represent that so that young Black boys, young Black girls, get to see somebody in a suit be smart is not still the norm.”

He goes on to point out that, “Getting to play with these incredible comedians, and keeping levity about it. It’s not always hard‑hitting; it’s light and fun, [showing that] diversity can be a fun thing as well.

While Gasteyer has her driving issues, Barinholtz has a bit more of a historical tie to American Auto as he explains, “My grandfather was one of the first used car salesmen in Chicago, because used cars are, like, a newer thing. And then, my great, great, great grandfather on my mom’s side was a Studebaker. This is true: There are four Studebaker brothers, and Jacob was the one I’m a descendant of, and he was the one who thought cars weren’t going to take off, and he was, like, “I’m going to stick with farming.”