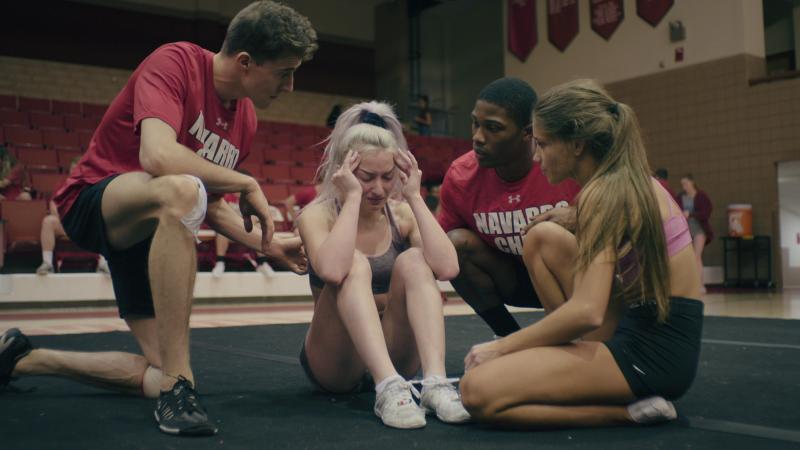 Emmy-winning documentary Netflix series Cheer will premiere on January 12 and has unveiled it’s trailer for Season 2. Season 1 launched last year in January with four episodes and season 2 has been expanded to nine episodes.

Star Jerry Harris of season 1 of the series was arrested on multiple felony charges related to sexual misconduct involving minors. According to Netflix, Season 2 will address the charges against Harris.

“I am a huge believer in the power of stories and telling them honestly,” said Greg Whiteley, Director and Executive Producer. “I believe the story is going to ultimately be the best version of itself when you are honoring what is true, and you’re not running from it. This season covers events as they unfolded, beginning in January 2020 through April 2021, following Navarro College and their rival Trinity Valley Community College on their journeys to the national championship. The new episodes also tackle extremely difficult moments, including the impact of COVID-19 and criminal charges against one of Navarro’s former team members. It was inspiring, heartbreaking, sometimes frustrating, and ultimately moving to be a part of their lives. Flying home from our last day of shooting in Daytona, I thought, ‘I cannot believe we saw what we just saw, we experienced what we just experienced.’ If we do our job right, we’re able to take the audience on that same ride.”

The show’s official logline for season 2, “the stakes have never been higher” in Season 2. “As Navarro defends its championship crown against a slew of challenges, including their fiercest rivals at Trinity Valley Community College, unexpected events threaten the camaraderie of the team and the season itself.”