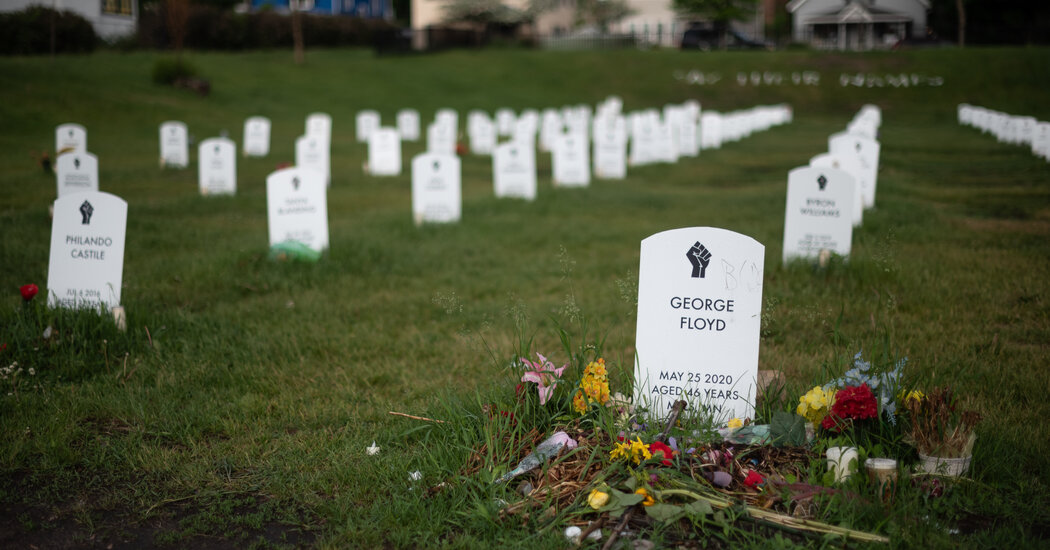 Police killings in America have been undercounted by more than half over the past four decades, according to a new study that raises pointed questions about racial bias among medical examiners and highlights the lack of reliable national record keeping on what has become a major public health and civil rights issue.

The study, conducted by researchers at the University of Washington and published on Thursday in The Lancet, a major British medical journal, amounts to one of the most comprehensive looks at the scope of police violence in America, and the disproportionate impact on Black people.

Researchers compared information from a federal database known as the National Vital Statistics System, which collects death certificates, with recent data from three organizations that track police killings through news reports and public records requests. When extrapolating and modeling that data back decades, they identified a startling discrepancy: About 55 percent of fatal encounters with the police between 1980 and 2018 were listed as another cause of death.

The findings reflect both the contentious role of medical examiners and coroners in obscuring the real extent of police violence, and the lack of centralized national data on an issue that has caused enormous upheaval. Private nonprofits and journalists have filled the gap by mining news reports and social media.

“I think the big takeaway is that most people in public health tend to take vital statistics for the U.S. and other countries as the absolute truth, and it turns out, as we show, the vital statistics are missing more than half of the police violence deaths,” said Dr. Christopher Murray, the director of the Institute for Health Metrics and Evaluation at the University of Washington, which conducted the study.

He continued: “You have to look for why those deaths that are being picked up by the open-source investigations, looking in the media and elsewhere, aren’t showing up in the official statistics. That does point to the system of medical examiners and the incentives that may exist for them to want to not classify a death as related to police violence.”

Researchers estimated that over the time period they studied, which roughly tracks the era of the war on drugs and the rise of mass incarceration, nearly 31,000 Americans were killed by the police, with more than 17,000 of them going unaccounted for in the official statistics. The study also documented a stark racial gap: Black Americans were 3.5 times as likely to be killed by the police as white Americans were. Data on Asian Americans was not included in the study, but Latinos and Native Americans also suffered higher rates of fatal police violence than white people.

The annual number of deaths in police custody has generally gone upward since 1980, even as crime — notwithstanding a rise in homicides last year amid the dislocations of the coronavirus pandemic — has declined from its peak in the early 1990s.

The states with the highest rates of police killings were Oklahoma, Arizona and Alaska, as well as the District of Columbia, while the states with the lowest rates were Massachusetts, Connecticut and Minnesota, according to the study.

Researchers estimated that about 20 times as many men as women were killed by the police over the past several decades; more American men died in 2019 during police encounters than from Hodgkin lymphoma or testicular cancer.

Unexplained or violent deaths in the United States are investigated by coroners or medical examiners, who use autopsies, toxicology tests and evidence like body camera footage to determine the cause and manner of death. The death certificate does not specifically ask whether the police were involved — which may contribute to the undercount identified by the study — but many medical examiners are trained to include that information.

The system has long been criticized for fostering a cozy relationship with law enforcement — forensic pathologists regularly consult with detectives and prosecutors and in some jurisdictions they are directly employed by police agencies.

Yet pathologists have also complained on occasion that law enforcement does not provide them with all relevant information, that they have been pressured to change their opinions, or that coroners, who are usually elected and are not always required to have a medical degree, can and do overrule their findings.

The researchers found that some of the misclassified deaths occurred because medical examiners failed to mention law enforcement’s involvement on the death certificate, while others were improperly coded in the national database.

While The Lancet study did not mention specific cases, there have been recent examples where the initial findings of coroners or medical examiners downplayed or omitted the role of the police when a Black man was killed: Ronald Greene’s death in Louisiana, for instance, was attributed by the coroner to cardiac arrest and classified as accidental before video emerged of him being stunned, beaten and dragged by state troopers.

In Aurora, Colo., the manner of Elijah McClain’s death was ruled undetermined after the police put him in a chokehold and paramedics injected him with ketamine, a powerful sedative. Almost two years later, three officers and two paramedics were indicted.

Even in the case of George Floyd, whose agonizing last breaths under a Minneapolis police officer’s knee were captured on bystander video, the police and the county medical examiner first pointed to drug use and underlying health conditions.

The National Association of Medical Examiners encourages the classification of deaths caused by law enforcement as homicides, in part to reduce the appearance of a cover-up (a homicide may still be deemed justified). But classification guidelines differ from office to office, and there are no national standards.

Roger Mitchell Jr., a former chief medical examiner of Washington, D.C., and an expert on investigating deaths in custody, has long said that death certificates should include a checkbox indicating whether a death occurred in custody, including arrest-related deaths as well as those in jails and prisons.

As long as medical examiners are not specifically asked to include that information, he said, he would not jump to conclusions about why they do not do so: “If it’s a function of training, a function of bias, a function of institutional and structural racism — all the things we can assume — we can identify that once we have a uniform system.”

A federal law passed in 2014 requiring law enforcement agencies to report deaths in custody has yet to produce any public data.

The paper’s top-line findings are similar to the results of a more narrow study conducted at Harvard in 2017 that examined one year — 2015 — and compared official death statistics in the United States with data on police killings compiled by The Guardian.

“It’s highlighting the persistent problem of undercounting of killings by police in official data sources, one of those being mortality data,” said Justin Feldman, a research fellow at Harvard who conducted the 2017 study and was a peer reviewer on the paper published on Thursday in The Lancet.

“This is an ongoing issue that we are still, after all these years, not doing a very good job of keeping track of people killed by police,” he added.

The study lands at a time when America has grappled with one high-profile police killing of a Black man after another. But, as the study showed, there are tens of thousands of other deaths that remain in the shadows.

Rulings on the cause and manner of death strongly influence whether criminal charges are brought or whether families receive a civil settlement. The death of Mr. Floyd was classified as a homicide and the death certificate cited law enforcement restraint, but the medical examiner still faced criticism after prosecutors made public his preliminary findings that underlying health conditions and drug use had contributed.

The former chief medical examiner of Maryland, Dr. David Fowler, was also criticized after he testified on behalf of the Minneapolis police officer, saying Mr. Floyd’s death was caused by several factors and was not a homicide.

Dr. Murray of the University of Washington said that one of the starkest findings was that racial disparities in police shootings have widened since 2000.

The trend contrasts, he said, with other health outcomes, such as heart disease, in which the racial gap has narrowed in recent years.

The study, he and other researchers said, points to the need for a centralized clearinghouse for data on police violence, as well as more scrutiny of coroners and medical examiners.

“There’s been an attempt to limit the reality of what is,” said Edwin G. Lindo, a scholar of critical race theory and professor at the University of Washington School of Medicine, who examined the findings of the study but was not involved in putting it together. “And what I would suggest is, when we don’t have good data we can’t actually make good policy decisions, and I don’t know if that’s an accident for it to be so greatly underreported.”