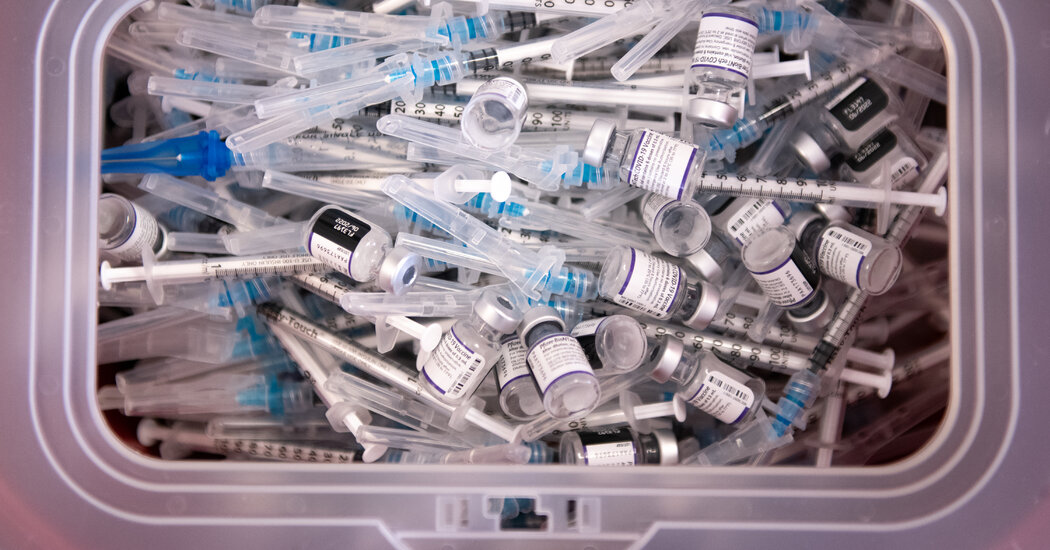 If asked to show her vaccine card, Stacey Ricks can choose from three.

Ms. Ricks, 49, a kidney transplant recipient who takes immune-suppressing medication, did not develop antibodies after her first two Moderna shots.

In June, without disclosing she already had received the Moderna shots, she got a dose of the Johnson & Johnson vaccine before federal health officials had approved anyone for a third shot.

Getting her fourth and fifth shots was trickier. By July, pharmacy records in the Houston area where she lives finally showed her prior shots. Armed with a doctor’s note explaining that she had not developed antibodies, Ms. Ricks convinced a pharmacist to give her two doses of the Pfizer-BioNTech vaccine over the summer.

Ms. Ricks is one of many people with compromised immune systems in the United States who have sidestepped government guidelines and received unauthorized fourth or fifth shots.

The Food and Drug Administration and the Centers for Disease Control and Prevention are in charge of determining when additional doses should be administered, but some patients and their doctors feel that federal agencies have acted too slowly to protect the most vulnerable.

Israel has already begun rolling out fourth shots — Prime Minister Naftali Bennett announced on Sunday that the country would offer additional shots to people age 60 and over, as well as to medical workers, becoming the first country to roll out an additional booster so broadly.

By comparison, the C.D.C. updated its guidelines in late October to say that immunocompromised groups would be eligible for a fourth dose six months after a third. For those who followed the rules, the earliest eligibility for a fourth would be in late February.

But as new variants like Omicron arise and vaccination rates continue to be sluggish in many areas, worrying those with weak immune systems, many of them are getting extra shots without being certain of whether they are safe or effective.

Typically, doctors have discretion to use approved medications outside of their recommended uses — so a fully approved vaccine like Pfizer’s could normally be prescribed as doctors see fit.

But, in order to receive and administer any Covid-19 vaccines, providers must sign a legal agreement with the C.D.C. — meaning that if they break the agency’s rules, they risk being kicked out of the vaccination program and could face prosecution. The C.D.C. also previously warned that providers administering unapproved shots may not have protection from patients’ legal claims if something goes wrong.

Legal experts say the government has done little to enforce compliance with regulations and seems unlikely to pursue punishments for most providers.

People taking the extra shots are not doing anything illegal. They could face civil lawsuits if vaccine providers decide to go after them for lying, but that is extremely unlikely, according to Govind Persad, an assistant professor at the University of Denver Sturm College of Law.

The F.D.A. and C.D.C. did not respond to questions.

Getting extra shots seems to have worked for some — to a degree. After Ms. Ricks’s fifth shot, her doctor sent her a note stating that she had developed a “moderate” antibody response but “still not a typical response.” She has continued taking extra precautions as if she is unvaccinated.

Researchers say some immunocompromised people — depending on their condition and the medications they take — may never generate an immune system response, no matter how many shots they receive. Doctors and advocates for the extra doses say the United States has a surplus of vaccines, so the alternative is often letting them go to waste.

Higher levels of antibodies seem to correlate with better protection against the virus, but researchers are not sure exactly what level of protection different numbers of antibodies provide, and the F.D.A. does not recommend that people use antibody tests to gauge immunity.

The C.D.C. estimates there are about seven million immunocompromised individuals in the country, but it is difficult to know who will benefit from additional doses, according to Dr. Robert Wachter, chair of the department of medicine at the University of California, San Francisco.

“This is, at this point, probably more improv than science,” he said.

With the blessing of his transplant team, Chris Neblett, who recently moved to Indiana, Pa., got a third shot in April.

Mr. Neblett, 44, had no idea whether it could help him — the medications he takes for his kidney transplant suppress his immune system and stopped him from generating antibodies after two shots of the Pfizer vaccine.

“Sure, we were skirting the rules, but what were the repercussions?” he said. “There weren’t really any.”

He generated low levels of antibodies after his third Pfizer shot, but it was not until his fourth shot in November that his antibody levels matched a normal, healthy individual’s response.

Mr. Neblett believes that his gamble served the greater good — he is enrolled in a Johns Hopkins Hospital study on organ transplant patients’ responses to coronavirus vaccines. His data and that of those who also acted outside of official guidelines helped convince the C.D.C. and F.D.A. to authorize third shots for vulnerable groups, according to Dr. Dorry Segev, a transplant surgeon at Johns Hopkins University who works on the study. He said hundreds of patients in his study got unauthorized shots.

While there could be some risks to additional shots, such as overstimulating the immune system, Dr. Segev said risks could be monitored carefully. Generally, he said, his data shows that additional vaccine doses should be safe and can work in some cases.

The global surge. The coronavirus is spreading faster than ever at the start of 2022, but the last days of 2021 brought the encouraging news that the Omicron variant produces less severe illness than earlier waves. As such, governments are focusing more on expanding vaccination than limiting the spread.

Return to office. For many businesses, the recent surge has brought a swift reversal of return-to-office plans. In recent days, companies including Goldman Sachs and Chevron have begun to backtrack on workplace policies. Some are telling employees to stay home with just days, or even hours, to spare before their planned returns.

“If three doses didn’t work at all, we probably should consider something different for that fourth dose,” Dr. Segev said.

One example, he said, is to try reducing or stopping immune-suppressing medication before giving out additional doses if possible. He is one of many doctors complaining that the C.D.C.’s guidance is overly rigid and prevents medical professionals from treating patients on a case-by-case basis.

Karen Pearce’s doctor has written her a note that the timing of her booster “MUST be done prior to her next chemotherapy infusion,” a treatment she needs every six months to control a life-threatening inflammatory blood vessel disease.

But Ms. Pearce, 69, from Gettysburg, Pa., will not be eligible for a fourth shot until February, right after she is supposed to receive her next infusion, which she and her doctor both believe would render her fourth shot useless. This booster shot has taken on added importance with Omicron, but no providers have agreed to give it to her one month early.

“More flexibility in their guidance could save lives, maybe mine,” she said.

Other experts say there are limits to how flexible guidance can be. Getting additional doses too soon could be counterproductive, according to Shane Crotty, a professor at the La Jolla Institute for Immunology’s Center for Infectious Disease and Vaccine Research.

This is because the immune system’s long-term memory seems to perform better if it can rest between two vaccines, he explained, and the body takes months to perfect its antibody-making process after an initial vaccination.

The F.D.A. approved one long-term preventive monoclonal antibody treatment specifically meant for vulnerable populations in December, but doses may initially be limited.

Patrick VanHorn, 67, of Ventura, Calif., has chronic leukemia and needs his immune-suppressing medication to stay alive. He produced no antibodies after his fourth dose of the Moderna vaccine in August.

He is discussing a fifth shot with his doctors but is not sure if he will go through with it.

“Right now, my thinking is, why bother?” he asked. “Nothing has happened in these first four shots. Why do I think a fifth shot would do something different?”