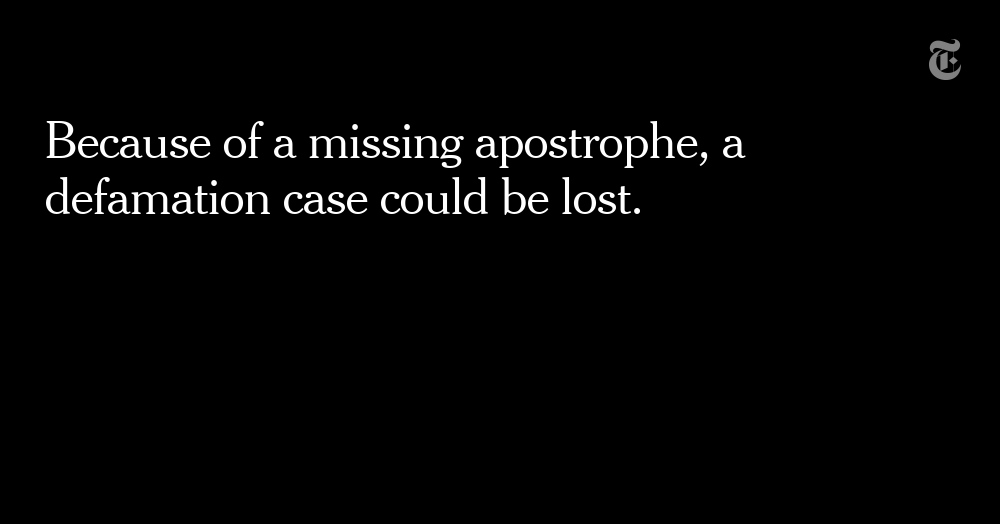 A missing apostrophe in a Facebook post could cost a real estate agent in Australia tens of thousands of dollars after a court ruled a defamation case against him could proceed.

In the post last year, Anthony Zadravic, the agent, appears to accuse Stuart Gan, his former employer at a real estate agency, of not paying retirement funds to all the agency’s workers.

At issue is the word “employees” in the post, which read: “Oh Stuart Gan!! Selling multi million $ homes in Pearl Beach but can’t pay his employees superannuation,” referring to Australia’s retirement system, in which money is paid by employers into super accounts for employees. “Shame on you Stuart!!! 2 yrs and still waiting!!!”

Less than 12 hours after the post was published on Oct. 22, Mr. Zadravic, who is based on the Central Coast in New South Wales, deleted it. But it was too late. Mr. Gan became aware of the message and filed a defamation claim against Mr. Zadravic.

On Thursday, a judge in New South Wales ruled that the lack of an apostrophe on the word “employees” could be read to suggest a “systematic pattern of conduct” by Mr. Gan’s agency rather than an accusation involving one employee. So she allowed the case to proceed.

Neither Mr. Zadravic’s lawyers nor Mr. Gan immediately responded to requests for comment.

In matters of punctuation, social media is the Wild West. In some corners of the internet, careless grammar is highly tolerated — even a badge of honor. In legal matters, however, disputed punctuation can cost millions.

One recent case in Portland, Me., involving overtime for truck drivers hinged on the lack of an Oxford comma — the often-skipped final comma in a series like “A, B, and C” — in state law. The case, settled in 2018 for $5 million, gained international notoriety when the United States Court of Appeals for the First Circuit ruled that the missing comma created enough uncertainty to side with the drivers. It gave grammar obsessives and those who adore the Oxford comma a chance to revel in the victory.

The tussle over a punctuation mark no larger than a pinhead comes in a country that has earned a reputation as the defamation capital of the world. Legal experts say the case of the missing apostrophe is far from surprising in Australia, which has a complex web of defamation laws and a history of awarding plaintiffs large sums of money.

In 2019, for example, the Oscar-winning actor Geoffrey Rush was awarded more than $2 million in his defamation case against Rupert Murdoch’s Nationwide News, the largest such payout at the time to a single person in Australian history. That same year, a billionaire businessman won a defamation case against a news organization that he claimed had wrongly linked him to a bribery case.

Court documents suggest that Mr. Zadravic appeared to have meant to add an apostrophe. After all, who hasn’t mangled grammar in firing off a social media post in a fit of pique?

But the judge, Judith Gibson, wrote in her statement: “​​The difficulty for the plaintiff is the use of the word ‘employees’ in the plural. To fail to pay one employee’s superannuation entitlement might be seen as unfortunate; to fail to pay some or all of them looks deliberate.”

Judge Gibson noted that the trial could cost Mr. Zadravic more than $180,000, and cited similar cases, including that of an Australian vet who was awarded more than $18,000 after a former client posted defamatory reviews online. In the latest case, it was not immediately clear what kind of recourse Mr. Gan had requested from the court.

High-profile defamation cases represent only a small fraction of the claims brought before Australian courts each year.

“The courts are awash with claims,” said Barrie Goldsmith, a special counsel with Rostron Carlyle Rojas Lawyers. A Sydney-based lawyer who has been working on defamation cases for more than three decades, he added that such claims would not be feasible in the United States, where the First Amendment protects freedom of speech.

Australia’s notoriously strict defamation laws have been criticized by members of the local news media. A 2018 survey by the Australian journalists’ union found that almost a quarter of respondents said they’d had a news article spiked that year because of fears of defamation claims.

Though the dispute in the case of the Facebook post by the real estate agent turns on a missing apostrophe, for others, misusing the punctuation is, in fact, tantamount to a crime.

According to Lynne Truss in her book “Eats, Shoots & Leaves”: “No matter that you have a Ph.D and have read all of Henry James twice. If you still persist in writing, ‘Good food at it’s best’, you deserve to be struck by lightning, hacked up on the spot and buried in an unmarked grave.”