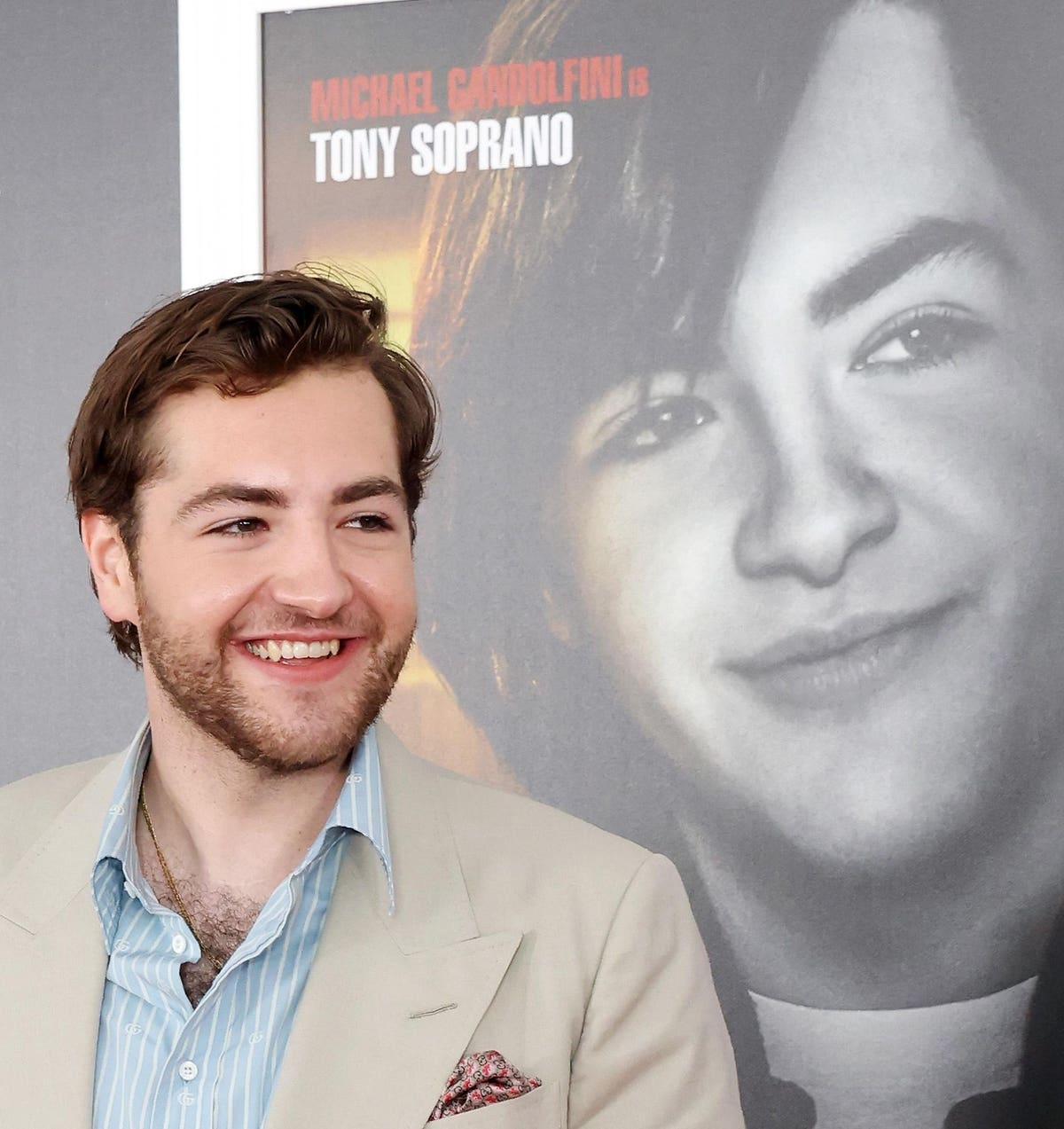 With The Sopranos continuing to be called one of the greatest TV shows of all time, it is no surprise that the prequel movie, The Many Saints of Newark, is one of the year’s most anticipated movies.

Landing simultaneously in theaters and on HBO Max, and a year later than initially planned, it focuses on the formative years of New Jersey gangster Tony Soprano. Iconically embodied by James Gandolfini on the show, the job of playing the younger incarnation here falls to his son, Michael, who nails it.

I caught up with Michael to discuss the journey, the experience, and the future of what is now a franchise.

Simon Thompson: The first thing people ask me when I mention The Many Of Saints of Newark being a sequel to The Sopranos is whether they have to have seen to show to get the movie.

Michael Gandolfini: I think that like any original IP, if you have seen the show, there will be a lot of little Easter eggs and things that you’ll notice. As far as the integrity of the plot, and the characters, and the arc, I don’t think you have to have seen this show or know anything about it to become emotionally intellectually invested in the movie.

Gandolfini: It’s funny you should ask that because, from interviews I’ve seen with cast members from the show, when they read the script, they genuinely didn’t know how it would turn out. I had a similar experience where, when I read the script, I was so moved by it, and it was so incredible, but what David Chase, the creator and co-writer, and Alan Taylor, the director, and Warner Brothers did in post-production creates this entirely different life. I didn’t see anything we shot, so I didn’t know how beautiful it would be. It’s very cinematic. The sound design is very effective, to the degree that it shocked me. When someone gets killed in this movie, it’s felt very viscerally. The way they surprise you and then the loudness of the gunshot, it feels really intense. I was genuinely moved by it. While watching it, I definitely learned a lot more about Dickie, played by Alessandro Nivola, and a lot more about the world than I had when we were filming it.

Thompson: On set, was there a eureka moment where you knew it was working?

Gandolfini: I wouldn’t say I ever asked myself that or worried about that. As a young actor, I just really wanted to do the best job possible. Every scene, I was like, ‘Do I feel that I’ve laid it out on the line for that scene? Did I give everything I could? Does Alessandro have everything he needs from me? Is David happy? Is Alan happy?’ I focused on my job and didn’t worry too much about the masses because I trusted Alan and David entirely.

Gandolfini: That’s so interesting, and you’re right, but I didn’t really think about it. I’ve been a fan of his work for a long time, so I was so honored that I was going to get to work with someone of such a high caliber. When we hung out, we quickly moved on from Tony and Dickie and their relationship, and I definitely think there was an unspoken bond in pressure. We were both doing things of very high pressure and understood the stakes. I can’t speak for him, but I needed him. I wasn’t going to be able to do this without him, so everything kind of went back to that. He recommended a book that I read, and that was helpful for me. It was called For The Sins of My Father, which Roy DeMeo’s son wrote. We also went out for many lunches and a lot of dinners; we also shared research and Sopranos clips. We really took a deep dive.

Thompson: Because of the popularity of The Sopranos and how highly anticipated this film is, was it hard keeping the shoot under wraps from prying eyes?

Gandolfini: The fans were great. We only shot a couple of times in New Jersey, but when that happened, they’d come out, and they were so supportive and great, respectful, and it was awesome. The paparazzi were pretty tough on this. We got slammed a lot. They’re trying to make some money and do their job, and I respect that, but there were some times it became tough when you’re like trying to do a scene, and there’s someone else’s camera right in your face. I remember, at the very beginning, it was tough because everyone wanted to keep everyone safe. Sometimes when I perform, especially when you’re playing someone like Tony, you need a break. I need to like get away, and I like to stand outside or go for a walk within a block radius of the set. For a while, it was like, ‘No, don’t go out because you’re going to get your picture.’ I was like, ‘Oh my God!’ I was thinking, ‘How long do we try and do this with the umbrellas and everything? When do we say f**k it? Let’s just do it, and it is what it is.’ It goes back to the fact people are excited, and that’s a good thing. I’m touched by that.

Thompson: Secretive productions are often given bogus names to throw people off the scent when they are on location. Did The Many Saints of Newark have one?

Gandolfini: That’s interesting. I think it was just “Newark” which isn’t that secretive. I could be wrong; there could have been something else, but what I remember is just “Newark.”

Gandolfini: There’s one scene that I really miss. For whatever reason, it got cut, but I thought it added a lot and was a very cool and important scene, and I miss it a lot, but besides that, I’m good. I’m proud of the movie, and it is really, really solid. To be honest, I’m so happy it is two hours long. Respectfully, I don’t think movies that are two and a half hours are working anymore. I don’t understand the idea that it needs to be two and a half hours or more if it’s high cinema. I don’t think that’s true. When I hear a movie is two hours long, I want to cry. I’m so happy. It’s the difference between me pushing through and staying in my seat in the movie theater or not caring and getting up to go pee because it’s three hours long. I think it’s really important those two hours.

Thompson: You seem very positive about the experience. Is it one you’d like to repeat?

Gandolfini: There is a clear gap between after this movie and before the show. To be honest, before, I was an absolute no, but now because of how much fun and how fulfilling it was creatively and how much I love Tony, I would come back. The question that I come back to is, ‘Is there more to talk about?’ After 86 hours of a TV show and two hours of a movie, is there more to unpack about Tony?’ It’s all up to David. If David sees more of this character to explore, I would absolutely be happy to come back.

The Many Saints of Newark lands in theaters and on HBO Max on Friday, October 1, 2021.