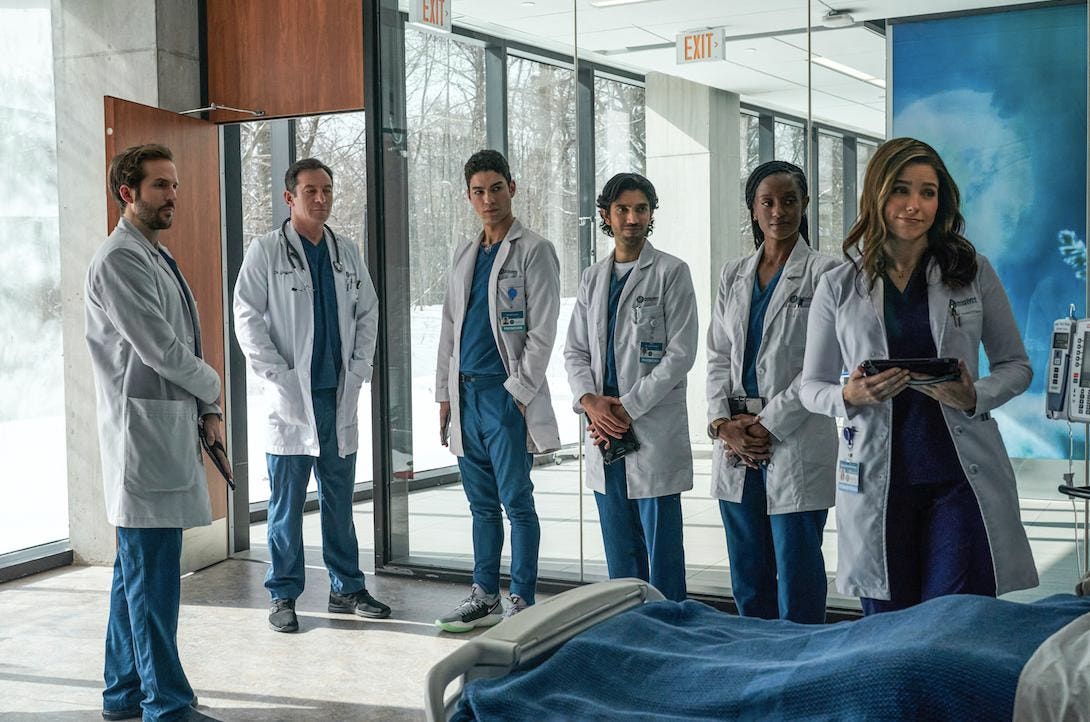 Sophia Bush says that she always wanted to be a doctor. Now she is. At least on TV.

She explains, saying, “[As] the daughter of an immigrant, your options are really like ‘you’re a doctor or a lawyer, or a lawyer or a doctor.’ So as a young person, I said I wanted to be a doctor. And I was particularly fascinated with heart surgery.  Considered it as a specialty. And then my high school drama teacher helped put me up in my first play. You can imagine the shock when I told my parents I wasn’t going to med school, I was going to go study theater and, you know, learn how to do costume makeup.”

In the series, Bush’s Dr. Griffith is a heart surgeon who becomes chief of surgery after her renowned boss falls into a coma. When her boss regains consciousness months later, he demands to resume his duties. Tasked with supervising the egotistical doctor, who has never acknowledged her stellar work, Sam finds herself going toe-to-toe with the caustic and arrogant Dr. Rob “Griff” Griffith, who just happens to be her father.

Bush says that taking the role feels like her life has come ‘full circle’, adding, “My parents are thrilled by this. They’re sort of like living out their moment.”

This isn’t to say that Bush went into the project feeling extremely confident as she admits, “I heard Harrison Ford once interviewed saying, ‘I’m always convinced when I start a movie that this will be the one where everyone tells me I’m actually terrible,’ and I thought, ‘Wow. If Harrison Ford is feeling that, maybe I should take this anxious thing that my peers and I talk about and, like, just throw it in my backpack and get on it with it.’”

Isaacs says of his character’s unexpected demotion and desire to rise back to the top position in his department, “[If] something goes wrong in heart surgery, even if it doesn’t go wrong, [heart surgeons] lose a lot of patients.  So, there is around some heart surgeons — certainly I can say it’s around Griff — a certain kind of God complex. So, to take all the power away from someone that is strutting that large and feels like they have the power of life and death, and then to completely, in some ways, emasculate them is an incredibly interesting dynamic. It’s what launches us off into [exploring] issues that are very specific, we try and make them real, of course, but they also have great metaphorical value.”

To help make Isaac’s point, Marshall says, “It reminds me that someone once said to me, ‘Do you know the difference between a heart surgeon and God? God knows he’s not a heart surgeon.’”

Marshall says that her role reminds her of another time in her life. “I used to be in the U.S. Air Force, and worked in the hospital there, and I bounced around a bunch of different clinics, from family practice to ER to pediatrics. I had to learn how to be in that same space with extremely high stakes, where peoples’ lives were on the line.”

She says that, “having someone’s heart in your hands, imagining what surgeons go through constantly” is powerful motivation for the actors to portray that aspect correctly on the series.

In doing research for the series, Marshall says, “We all know that Grey’s Anatomy has about [tons of] episodes. Sophia and I spent the pandemic rewatching Grey’s Anatomy.

She puts more shows on the list, admitting, “I love New Amsterdam, The Good Doctor. I love all of them. I watch all of them. I’ve been addicted to medical dramas for as long as I can remember.”

Then Bush adds to the research roster, saying, “We spent the pandemic going, ‘Have you seen The Surgeon’s Cut on Netflix ? What did you think about the heart doctor? What about the neurosurgery guy? Can you imagine doing fetal surgery?’ And then texting each other and going, ‘I couldn’t stop thinking about that person, so I found these videos on YouTube and now we’re following this cardio-thoracic guy on Instagram.”

Marshall coyly reveals that, “I’m so corny, that my first head shot was me in scrubs. I actually paid good money for a real photographer to shoot me. Here I am wearing scrubs. So, I’m addicted to medical dramas. So, I’m in my happy place here, for sure.”

Series creator and executive producer Katie Wech says that while the medical part of the narrative is important, the show was really launched on the premise of, ‘What would it be like to be your dad’s boss?’

She adds that on this series, “In a macro sense, every patient is some part of the relationship that Sam and Griff, her father, are trying to repair.”

And, she says, “Jennie Urman and I got excited about the idea of building a world in a hospital that an audience would actually want to be in at a time like this.”

Fellow executive producer Jennie Snyder Urman jumps in to say, laughing, “I’m a lifetime hypochondriac, so I bring that to the table.”

But, she does come with medical show experience, having overseen the series Emily Owens, M.D. and says that, “I do love medical dramas is you get to put so much heart into them, and emotion. As someone who has been in the hospital a bunch of times, I feel that vulnerability and how much we all rely on these people that have devoted their lives to healing. It’s really extraordinary in so many ways. I think we’ve all come out of this pandemic with an even greater appreciation for what that is.”

She explains how a unique connection to medicine during this trying time changed her point of view, saying, “My college roommate is an ER doctor, and she ran the whole COVID emergency department during this pandemic. And just hearing just so much [about how] humanity and science merged together, I feel like that is where the sweet spot is for us as a human race, you know, is that science and humanity together.”

Continuing on this tangent, she adds, “I think that’s what draws me into stories like this, where you just care so much and want people to get better and have so much respect for the miracles that happen every day. You really meet people when they’re at their most vulnerable, and if you can help them through that – what a gift. And that’s something that I would like to watch on TV, [and] I also like [being] a part of it

‘Good Sam’ premieres Wednesday, January 5th on CBS and is available for streaming on Paramount+