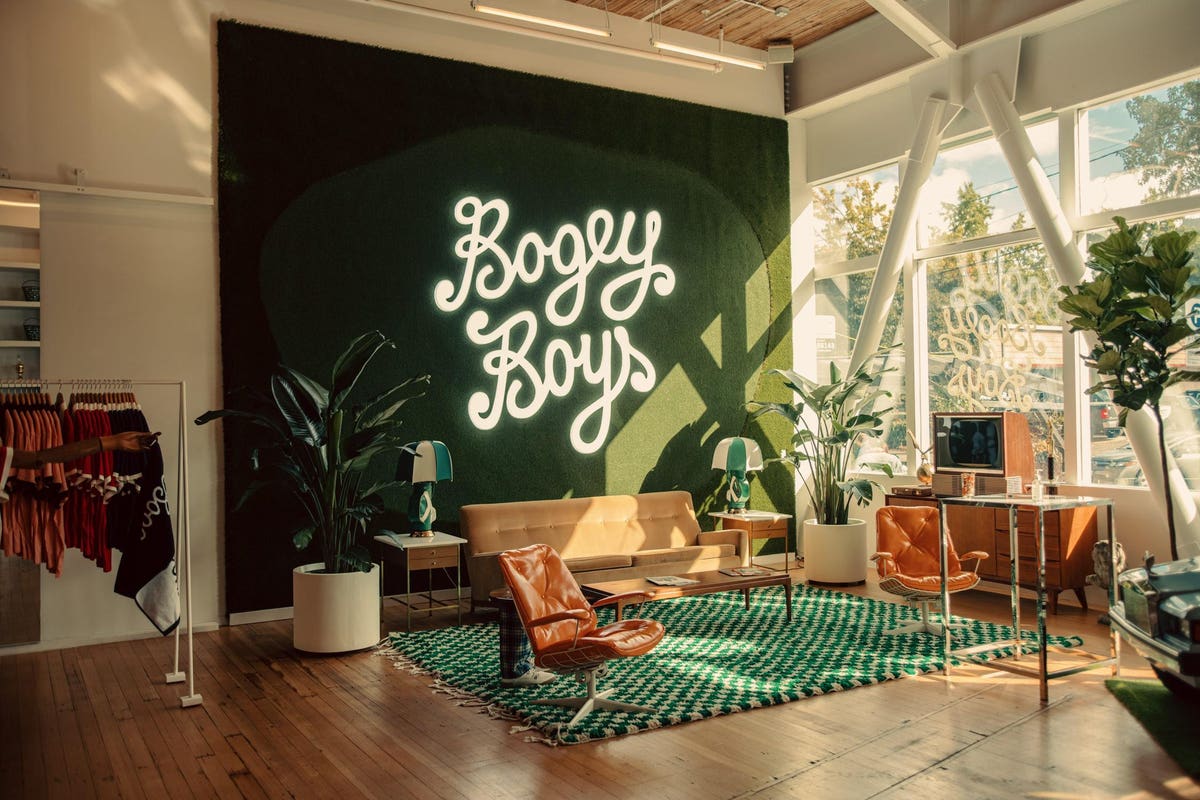 When rapper turned avid golfer Macklemore decided to turn a passion project into reality with the launch of Bogey Boys, his intentions were to also help grow the sport of golf by inspiring more people to play. By creating a flashy apparel line that resonated with golfers looking to stand out while on the course, Bogey Boys has also made inroads as a lifestyle brand as the 7-month-old business continues to expand.

Since debuting their first debut collection back in February, the reception and energy the brand has created and received has even surpassed the Grammy-Award-winning artist’s initial expectations. Bogey Boys recently partnered with Nordstrom to feature their products in two Seattle locations and just opened their first flagship store on September 18th in the same Capitol Hill neighborhood where Macklemore used to hunt for vintage threads at local thrift shops.

The new store open now through at least the end of the year, will feature the latest Bogey Boys collections along with a 1,500-square-foot putting green on the street level. In a nod to restoring the memories of his youth, Goose Magees Vintage Mall, a vintage thrift store will occupy the bottom level providing the newer generation a glimpse into the past.

I caught up with Macklemore to discuss the grand opening of his flagship store in his hometown of Seattle, his entrepreneurial journey up to this point, and where he sees the brand going from here.

Can you describe what a whirlwind the last six months have been for you with launching the brand to partnering with Nordstrom and now opening a flagship retail store in your hometown?

If you would’ve told me nine months ago that we would sell out in two Nordstrom’s and that we would be opening a flagship in Seattle, I wouldn’t have believed you. It has been amazing. It’s crazy to launch something, put all this energy, money, and time into it and you have no idea what it’s going to do. I had no clue who Bogey Boys was going to resonate with. Since we dropped in February, the response has been amazing. I feel like we’re building a community of people that really love what the brand is doing, and they understand the vision behind it. That was always the most important part for me. I don’t want to just have a quick moment here, we are building a sustainable brand. I want to build with people that want to look dope on a golf course, that want to help grow the game, that are like minded and love the sport and our style of clothing. The 70-80’s golf era is what the brand is inspired by, but we also want to bring people together.

Have you had the opportunity to sit down and really reflect on the fact that you’re opening your own flagship store when this first started as a passion project for you?

There have definitely been some moments. It’s also been a bit stressful. Earlier this week, I had the chance to write some things down and I stood outside the storefront. I had a friend come over to check out the space. He looked at it and was like, “It’s dope.” We were talking and as we were leaving, he looked at it again and was like, “Man, this is amazing what you guys have built and it’s inspiring me, and now I have all these new ideas.” He told me how he gets ideas in his head, how we actually executed, which has inspired him. That’s what creativity is and what taking that leap is. I think there’s so much fear around starting something new. I had it and still have it. With the store opening now, just a great feeling.

Starting a new business is a challenge. I’m putting myself out there with this store and that’s what’s exciting. Getting out of my comfort zone, make something that hasn’t been done before, occupying a space in the neighborhood that I grew up in; that’s something special. To have Bogey Boys upstairs and also have Goose Magees Vintage Mall downstairs, all under the same roof? To me, that’s an amazing dream actually realized.

Your love for vintage clothing is well known. Why was it important for you to incorporate Goose Magees Vintage Mall into the store and explain what customers can expect?

We were first going to do golf simulators in the basement and I’m glad that we didn’t. For one, right when we were going with the simulator idea, a really dope company called Five Iron announced that they had just leased the building up the street and were doing simulators, so I knew it wasn’t meant to be. It was actually my homie Nick Beeba that came up with the idea to add the vintage mall. When he said it, it made so much sense. As much as I love a golf simulator, Capitol Hill is originally a very diverse and eclectic place. That’s the origin and it’s important to keep those roots. I think this is a space for artists and creatives now. As much as it’s a golf company, it’s also design, music, and community. Downstairs with the vintage, these are the people that dig and hunt for treasures; they may keep and wear or flip it. This is what it’s all about to me in terms of what Capitol Hill represents. I think that seeing that all come together, I’m definitely having a moment with it.

Back in February, you said that this wasn’t a flash in the pan and as you look at how far you’ve come in such a short period, how big do you think this brand can become as you continue to expand as a business?

You’ll be performing at the Seattle Seahawks home opener on Sunday, right after the store opening. How excited are you for that and to just be back to performing music live again?

It’s going to be weird. I probably should be excited because I haven’t rapped on stage seriously in a good year and a half but It’s going to be awesome. It’s going to be a crazy weekend but this is what it’s all about with the world opening back up again slowly, and fans being able to come together and celebrate the Seahawks. Plus it’s the same weekend as the store opening — it’s definitely awesome.

I saw you at the BMW championships a few weeks getting some golf tips from Sergio Garcia and some of the other pros. What’s it like to learn from the best in the game and have you gotten any feedback from them on Bogey Boys?

Getting tips from them is amazing. Sergio was so cool. He helped me re-putt and gave me some great swing tips. He was telling me, “You’re aiming too far left.” He definitely helped me out along the 18-hole journey that we had. When we first launched Bogey Boys, I was like we must send this gear to all these top golfers. A lot of us follow one another on Instagram and I got everyone’s addresses and sent them some boxes. They were thanking me privately, but not publicly on Instagram (laughs). I realized none of them can say anything nor can they wear the product ever, due to their sponsor deals. The pros have been very complimentary of the stuff but no one can rock it. I’ve had some good off-the record convos as the players dig it and respect it for sure.

What have the last seven months taught you about starting a new business and do you see any parallels between this golf venture and making music that moves people?

This process of Bogey Boys has been a repeated lesson in patience and acceptance. We’re manufacturing in the era of COVID. Timelines get pushed back; things don’t happen as planned, this piece might not fit quite right, so we have to go back to the drawing board. There are many late nights of grinding. All of those things have parallels with music. I was talking to my wife recently about the store and reflecting on how cool this all is. Speaking of my wife, she plays such a huge part in everything I do. She has an amazing eye and attention to detail and is absolutely a huge part of the Bogey Boys team. She has always been an integral part in everything I do. Now that we have three kids, one is an infant, and she’s still in the store, painting and moving boxes. She’s been a rider from the jump.

One thing about music, and as much as I love the space of design and designing clothing it will never be able to compare to the spirit when it comes to making music. Music speaks to the soul. You can make things, sew fabrics, make garments and there’s absolutely soul and spirit in that. But in terms of that thing that connects you to the universe — you can call it God or whatever moves you. When the Music flows through you and the pen starts moving, or you’re on stage in front of thousands of people, that thing is special in a way that I’ve never experienced in terms of creativity. That just can’t be duplicated.