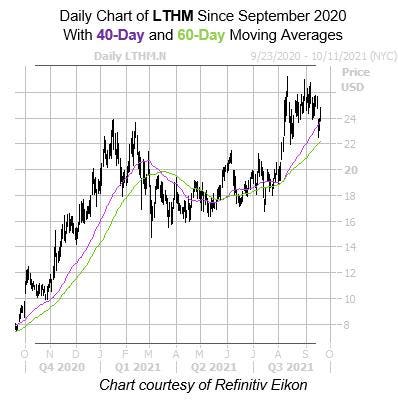 The shares of Livent (LTHM) just staged a bounce off the $22.50 level, with support from the 60-day moving average. Plus, the shares are trading back near their Aug. 13, all-time high of $27.27, while boasting an impressive 197.1% year-over-year lead. The even better news is that the equity’s latest pullback has placed it near a historically bullish trendline, which could launch LTHM closer to that peak over the coming weeks.

More specifically, Livent stock just pulled back to its 40-day moving average, after spending more than a month above it. According to data from Schaeffer’s Senior Quantitative Analyst Rocky White, similar moves have occurred four times over the past three years, with the security enjoying a positive one-month return 50% of the time, while averaging an 8.6% pop. From its current perch, a comparable move would put LTHM back above the $26 mark.

The security looks ripe for a short squeeze, too, which could push the shares higher still. Short interest is up 10.1% in the most recent reporting period, and the 26.90 million shares sold short now make up 16.8% of the stock’s available float, which is the equivalent of nearly two weeks’ worth of pent-up buying power.

A shift in the options pits would keep the wind at the equity’s back. At the International Securities Exchange (ISE), Cboe Options Exchange (CBOE), and NASDAQ OMX PHLX (PHLX), LTHM’s 50-day put/call volume ratio stands higher than 90% of readings in its annual range. This means long puts are getting picked up at a quicker-than-usual clip. In addition, short-term options traders have rarely been more put-biased. This is per Livent stock’s Schaeffer’s put/call open interest ratio (SOIR), which ranks higher than 73% of readings from the past 12 months.

Options look like a solid way to go for those wanting to speculate on LTHM’s next move. The security’s Schaeffer’s Volatility Index (SVI) of 62% stands in the 17th percentile of annual readings, implying options traders are pricing in relatively low volatility expectations for Livent stock at the moment.