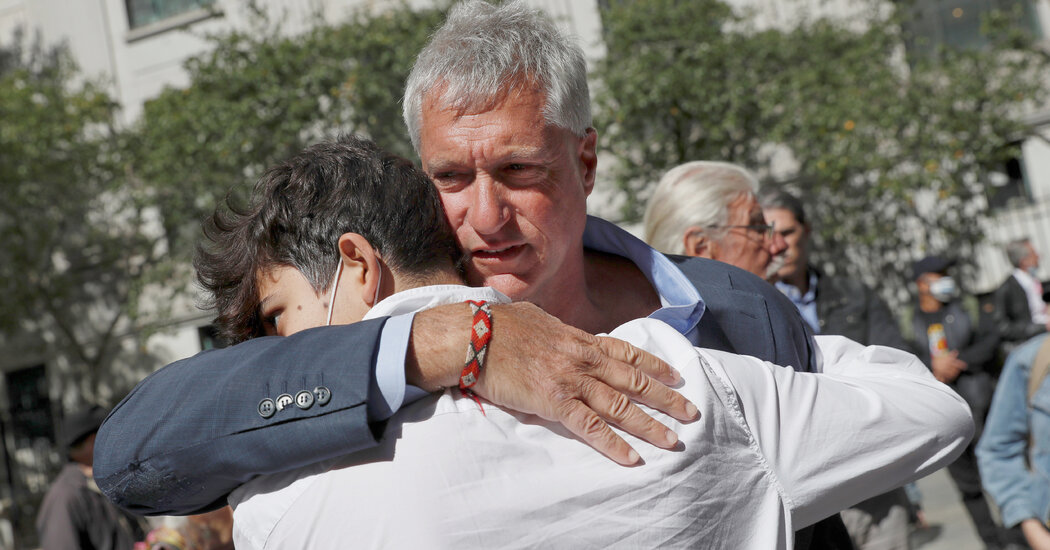 Steven Donziger, the environmental and human rights lawyer who won a $9.5 billion settlement against Chevron over oil dumped in Indigenous lands in the Amazon rainforest, surrendered himself to the federal authorities on Wednesday to begin a six-month prison sentence.

Mr. Donziger was found guilty in July of six counts of criminal contempt of court for withholding evidence in a long, complex legal fight with Chevron, which claims that Mr. Donziger fabricated evidence in the 1990s to win a lawsuit he filed against the oil giant on behalf of 30,000 Indigenous people in Ecuador. The convictions were preceded by Mr. Donziger’s disbarment last year.

Late Wednesday afternoon, Mr. Donziger turned himself in to a federal prison in Danbury, Conn., where he will serve his six-month sentence. He had already spent more than 800 days under home detention after the court cited flight-risk concerns, his lawyer, Ronald L. Kuby, said on Wednesday.

“After 100 pages of legal briefing, the appellate court today denied my release in 10 words,” Mr. Donziger said on Twitter on Tuesday. “This is not due process of law. Nor is it justice.”

“We will get through this,” he added.

Representatives for Chevron did not immediately respond to requests for comment.

On July 31, 2019, Judge Lewis A. Kaplan of the U.S. District Court in Manhattan, a former corporate lawyer, tried to charge Mr. Donziger with contempt of court based on his refusals in 2014 to give the court access to decades of client communications on devices like his phone and his computer. That year, Judge Kaplan supported Chevron’s complaint in a 500-page ruling finding that Mr. Donziger and his associates had engaged in a conspiracy and criminal conduct by ghostwriting an environmental report used as a crucial piece of evidence and bribing a judge in Ecuador.

After the U.S. attorney for the Southern District of New York declined to prosecute the case, Judge Kaplan took the rare step of appointing a private law firm, Seward & Kissel, to prosecute Mr. Donziger in the name of the U.S. government, Mr. Kuby said.

Seward & Kissel has represented many oil and gas companies throughout the years, including Chevron in 2018.

Misdemeanor criminal contempt carries a maximum sentence of one year. If the penalty is more than six months for this type of charge, Mr. Kuby said, a defendant would get a trial by jury. Even after multiple objections by Mr. Donziger, Judge Loretta A. Preska lowered the sentencing to six months — it had previously been set to a year — and denied Mr. Donziger’s request for a jury trial.

In July, Judge Preska found Mr. Donziger guilty of all charges. On Oct. 1, Mr. Donziger was sentenced to six months in prison, a day after he asked the court to consider an opinion by independent United Nations experts that found his court-ordered home confinement of more than two years a violation of international human rights law.

Judge Preska agreed to not incarcerate Mr. Donziger immediately, giving him a chance to appeal the conditions of his bail. In a court order on Oct. 12, Judge Preska declared that if Mr. Donziger’s appeal failed, he would have to surrender himself within 24 hours of the decision.

In 1993, Mr. Donziger sued the Chevron Corporation for oil spills that had a detrimental effect on the Amazonian region of Ecuador. Mr. Donziger has argued that Texaco, which was acquired by Chevron in 2001, cut through the Amazon, spilled oil into pristine rain forests and left behind a toxic mess.

At the time, Chevron said Mr. Donziger fabricated facts for his own ends, blaming the company for pollution mostly caused by Petroecuador, the national oil company that was once a partner of Texaco and continues to produce oil in the region.

Chevron has long argued that a 1998 agreement that Texaco signed with Ecuador after a $40 million cleanup absolves it of liability. It contends that Ecuador’s state-run oil company is responsible for much of the pollution in the oil patch that Texaco left in the 1970s.