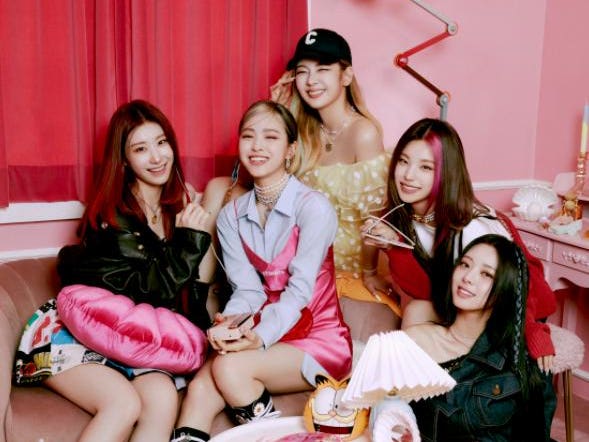 It looks like in just a few days, Itzy is about to enjoy their biggest week ever on the Billboard charts in America. The South Korean girl group may very well reach the top 10 on the Billboard 200 albums ranking with their first-ever full-length, the just-released Crazy in Love, which is off to a phenomenal start in the U.S. The title could arrive as the bestselling in the nation, and it will certainly be welcomed warmly in their home country as well.

Itzy may be reaching many American listeners for the first time, but they certainly aren’t new. The all-female vocal act has already released five EPs and several other collections during their years together, and they are tried-and-true hitmakers in South Korea. Now, with a new English single and an intense marketing and promotional plan, it looks like they’re making a play to become the next K-pop act to break out and enjoy global fame.

I spoke with Lia from the group Itzy about their debut album Crazy in Love, lead single “Loco” and holding onto the darkness in their music while embracing all things pink.

Hugh McIntyre: I’m excited to see the album out! I’m sure you are too. After releasing a couple of collections, how does it feel to finally have the full-length come out?

McIntyre: I think you’re right in assuming that they’re going to love it. Now it’s called Crazy in Love, but I was reading some of the descriptions of the songs, and it sounds like it’s not just about love. So what would you say the album is about?

Lia: The album is about love, but not in a narrow way, I guess. It expresses love in a very huge and wide expression. For example, our title song “Loco,” I guess that’s the most directly related to the name of the album, because the song is basically about how we’re feeling out of control. And we can’t really bear ourselves. And we’re kind of very confused in this feeling because it’s your first time being very deeply into someone. So that’s why we expressed it more with the word crazy.

McIntyre: Itzy has already released several EPs and single albums. So when you were going into planning this and recording this, what was different? How did you think differently? Because it was going to be a bigger project?

Lia: Well, this only counts for me, but for me it wasn’t like a huge…like another different project. So it didn’t really feel different. I don’t know about my members, but for me it felt the same, except it just felt like more of a full pack and more of a huge thing. So it took more time obviously. And there’s lots more to be surprised about than with our normal comebacks. Because we basically have two music videos coming soon. So it just felt much bigger.

McIntyre: You talked a little bit about it, but I want to bring it back up again. The single is “Loco”—is there anything else you want to share about the song, or maybe the video?

Lia: I think it’s still us, but I think it was another new side of us and that’s why it was likely a challenge too. If you look at the music video, not only the song, but I think when you look at the music video, it’s gonna look and sound much different than our previous songs. At first, when I just listened to the song, it was a little bit…not that different from what I expected,

After shooting the music video and looking at the dance and everything with the song, it feels much more new and different. It’s a bit more pink and lovely, I guess. The music video itself sure is. We never really wore pink before.Our previous song “Mafia in the Morning” was very dark. It’s not something we could have imagined before. At the same time, the emotion of being crazy in love and very chaotic is a bit similar.

McIntyre: Sure. Itzy has been releasing music for a little over two years now, and from the minute you started, you guys were really successful. Now it’s only getting bigger, especially looking globally. Do you guys feel any pressure in terms of commercial success or becoming bigger?

Lia: It would be a lie [to say] we didn’t have any pressure. Our debut, all of our songs were very much loved, but especially when we first came out, our debut, the song “Dalla Dalla” was very much loved and lots of people gave us so much attention. So every time when we come out with a new song, there is definitely a pressure of having to be better than the previous song. There is definitely a pressure, but we try not to think about the pressure.

McIntyre: I noticed that there’s the regular version of “Loco” and an English version on the album. I know you guys have recorded and released English music before, but why is it so important for you to straddle those languages at the same time?

Lia: Like how you mentioned, we don’t only have fans in Korea. There are so many global fans who give so much attention, to us, for us. We are growing globally. I think it’s a big part of our growth and success. Lots of it is really thanks to all the fans all over the world. I know they still love us with Korean music, but it’s different hearing it in English. We wanted to help them understand our music more, because they don’t speak Korean.We want to get closer to them emotionally. On the musical side, it’s because we want them to have a better understanding of our music. On the other side, we really [want to] thank them for all the attention and love they gave us. So I guess that’s one of the ways to pay back the love and attention.

McIntyre: Now, we’re doing this interview. You guys have released English music. I know you’re going on Kelly Clarkson soon. It seems like really making a mark in America. Is that a goal for you guys?

Lia: Yeah. Because we really want lots of people to enjoy music and gain energy and lots of good stuff from us. Being musically successful in America is one of the ways how lots of people get to know our music.

McIntyre: Crazy in Love is actually the third collection you have released this year. That’s a lot of music. How do you guys keep up that pace?

Lia: So far it’s okay. It is a lot, but we’ve been preparing it one by one, one after the other. So far I think we’re fine, but we just have a hard time when we have to remember our previous songs. That’s tough. Because we’re not always practicing the songs from our previous albums.