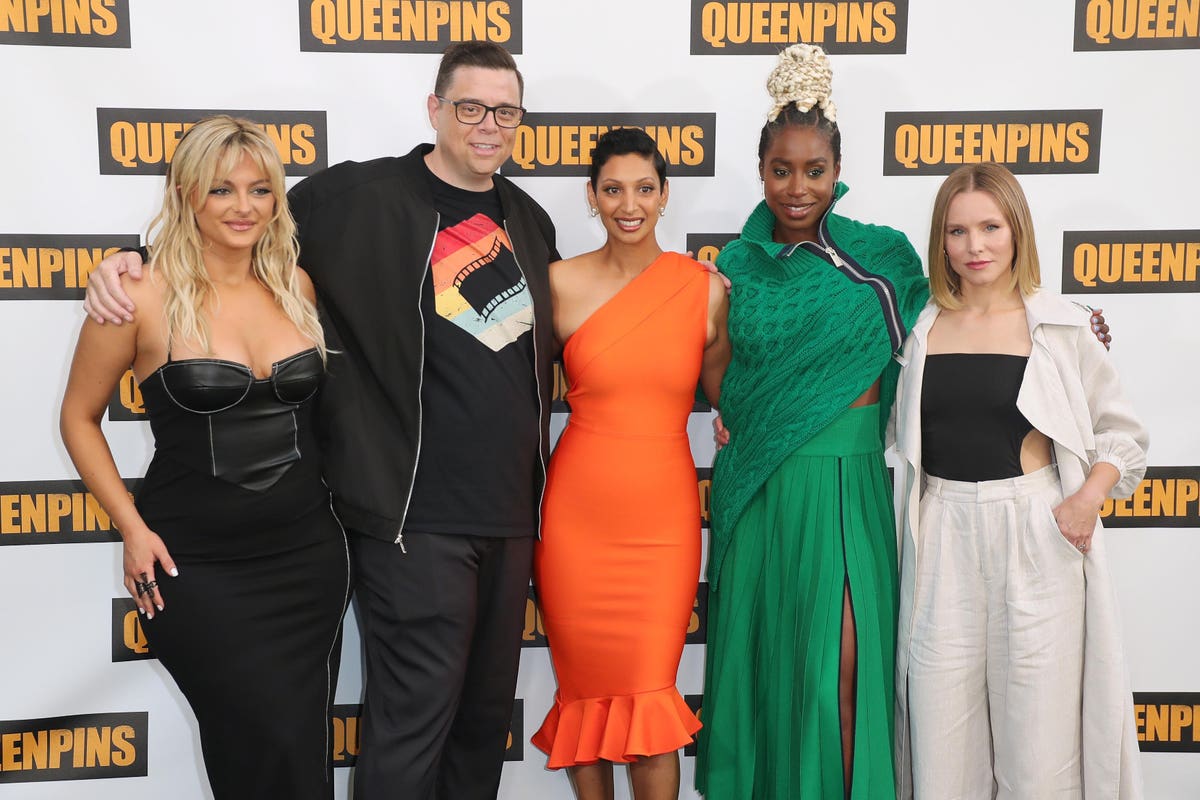 The film itself is a charming comedic undertaking, backed by a strong script and direction and some talented leads. I spoke with directors Gaudet and Pullapilly and leads Bell and Howell-Baptiste (in two separate interviews) to discuss the film, its inspiration, and what it was like performing these complex characters in a real world crisis.

JE: How did Queenpins come to be?

GP: Aron and I are always looking for stories based on true stories that we feel like we could option early on and tell the story. Usually these are already taken by George Clooney or Brad Pitt, so Aron and I have to take a deep dive most of the time to find quirky or interesting stories that we both love. I was on a coupon blog, and I read just three lines that said something about a $40 million coupon caper and it had the name of the detective on it. It just piqued my interest and it piqued Aron’s interest. We contacted the detective and literally after we talked to him we were in a car driving to Phoenix to learn more about the story.

AG: He was able to show us photos from their investigation and some of the real counterfeit coupons the women had sold, and just really filled us in on what that scam was and how they did it. We really took that and just created our own characters within that framework, and we wanted to say something with our characters. Connie, and Jojo and Ken and Simon aren’t based on anybody in the true story, but it’s really that framework of the scam and what they did with all the money when they got it and what they bought. All of those things are pretty true to what happened.

GP: And really, your question was about why were we drawn to this story as well. Aaron and I, in Hollywood have been here for seven years working and working through trying to get our scripts made and trying to get our projects out there. We’d go into meetings with scripts that people loved, with a cast that people loved, and they would say ‘love all of this, but you guys have no value.’ And when you hear that over and over and over again, ‘you have no value,’ and what we realized is writing Queenpins was really a story about Aron and I trying to figure out a loophole in Hollywood to be able to create value. And you know, when STX sold this film to Paramount plus, and Showtime a few weeks ago, we changed our value.

AG: It’s very collaborative. We kind of joke that we have a two-person-writers-room. We’re not trading a draft back and forth, we’re sitting basically how we’re sitting now, at our computer writing together, not a single word goes into the script that we both don’t agree upon. It’s heavy research… most of our scripts if not all of them are really based on true stories, so it was a lot of research beforehand. And then just a very collaborative process that we then carry over into production.

GP: So much of our process that we use for directing on set all stem from our leadership characteristics and traits that we wanted early on. Part of it ties into us even being married, we have a little sign on our computer that says ‘be open to each other’s ideas.’ That’s not just for writing but it’s also just in life in general. We start from a place of love and respect and we have to carry that through, as we’re pushing each other trying to make a scene stronger, more interesting, really working on that dialogue.

JE [to Kristen Bell and Kirby Howell-Baptiste]: How did you both get involved.

KB: I read Queenpins quite a few, probably four years ago, and fell in love with the story. I couldn’t believe I had not seen it in the news, but we touched on that in the movie… the corporation’s didn’t really want this story in the news because these women had really taken them for a ride. I immediately related to the idea of these two best friends feeling so down on their luck, so undervalued that they decided to make some victimless illegal decisions to help themselves out.

KHB: And I got involved in it way later… there’s a lot of things that happen behind the scenes and different people were attached with different actress attached. But through, I guess, serendipity, it so happened that this role came available. I got a text from Kristen that was like ‘do you like working with me? And can you do an American accent?’ And I said yes! She was like, ‘Okay, I’m sending you a script,’ I also fell in love with it straight away. I read it so fast which is, I think, quite a good indicator… it was just riveting. And I figured if it’s this good to read it’s gonna be amazing when we put it on its feet.

JE: While your characters become criminal, they’re surely likable. We’re rooting for them! How did you manage to make them so sympathetic?

KB: I think mine was really given to me by the filmmakers. There were wildly specific elements of her life that anyone could… maybe not relate to, but could certainly have sympathy for like how she was having fertility issues. You don’t really need to say much more than that, you immediately have sympathy for someone and you’re rooting for her just by hearing that… like ‘God, I hope you get what you want or what you need.’

I think also the fact that she previously was an Olympian… there’s something we don’t talk about often which is a lot of Olympians… we put them on a pedestal, expect them to represent our country, and then completely forget about them. A lot of them have trouble paying their bills. For Connie, my character [is] someone who had this huge outlet and worked so hard for America, but then just completely seems to have been tossed aside… When you hear something sad about someone, you as a human being just go ‘God, I really hope the best for you and I want to see how your story unfolds.’

It’s helpful that Kirby and I had a friendship going in because another part of making a character likeable is that you have to see something they are pouring love into and something they are caring for, and JoJo treats Connie so well and Connie treats JoJo so well. You’re watching the love flow between two women and you’re like, ‘Oh, those are good people.’

KHB: “Yeah, exactly. At the core of it, they are good people. I think what people can relate to is, like everyone, they are trying their absolute best to sort of to improve the hand that they were dealt.”

JE: What was it like shooting during the pandemic? Did it add challenges to the shoot?

KHB: Well, I think everything is different. Our job as actors is to have a connection and to create intimacy and for it to be so real that the people watching are able to lose themselves in it. And when you have to stay six feet away from people, everyone has masks and you can’t interact in the [same] way. We didn’t have an in-person table read, we didn’t have in-person chemistry tests, we didn’t have any of the things that you would normally have that are [kind of] the building blocks for what the production will be. So that was kind of difficult,

We were fortunate (and I may never be this fortunate again) in that in lieu of those things I had Kristen, who I know really, really well, who I love working, who is a dear friend of mine… so it was okay that we didn’t get to have that. And then I worked with Paul who I’ve worked with before on Cruella. So I knew how he worked and I think Paul’s one of the absolute hands-down funniest people alive. He’s unbelievable. So for me, I mean, there were definitely there challenges. We had a much smaller crew, which in some ways was quite nice, because by the end of it, you did get to know everyone except no one’s faces. We still don’t know what anyone’s entire face looks like.

Queenpins is available in theaters and will be streaming exclusively on Paramount+ on September 30th.