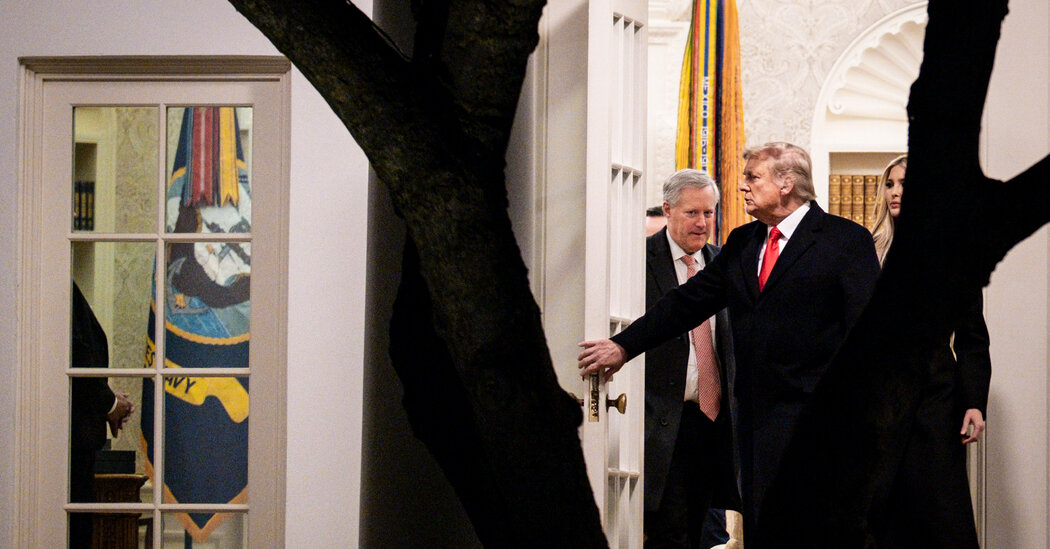 As the House committee investigating the Jan. 6 Capitol riot fights to extract testimony and documents from Donald J. Trump’s White House, an Atlanta district attorney is moving toward convening a special grand jury in her criminal investigation of election interference by the former president and his allies, according to a person with direct knowledge of the deliberations.

The prosecutor, Fani Willis of Fulton County, opened her inquiry in February and her office has been consulting with the House committee, whose evidence could be of considerable value to her investigation. But her progress has been slowed in part by the delays in the panel’s fact gathering. By convening a grand jury dedicated solely to the allegations of election tampering, Ms. Willis, a Democrat, would be indicating that her own investigation is ramping up.

Her inquiry is seen by legal experts as potentially perilous for the former president, given the myriad interactions he and his allies had with Georgia officials, most notably Mr. Trump’s January call to Secretary of State Brad Raffensperger, urging him to “find 11,780 votes” — enough to reverse the state’s election result. The Georgia case is one of two active criminal investigations known to touch on the former president and his circle; the other is the examination of his financial dealings by the Manhattan district attorney.

Ms. Willis’s investigation is unfolding in a state that remains center stage in the nation’s partisan warfare over the vote.

The Biden Justice Department has sued Georgia over a highly restrictive voting law passed by the Republican-led legislature, arguing that it discriminates against Black voters. At the same time, Mr. Trump is aggressively seeking to reshape the state’s political landscape by ousting Republicans whom he considers unwilling to do his bidding or to adopt his false claims of election fraud. He is supporting a challenger to Mr. Raffensperger in next year’s primary, and has been courting possible candidates to run against the Republican governor, Brian Kemp. One Trump ally, former Senator David Perdue, is weighing such a run, while another, the former football star Herschel Walker, is eyeing a Senate bid. (A new governor would not have direct power to pardon, which in Georgia is delegated to a state board.)

Instead of impaneling a special grand jury, Ms. Willis could submit evidence to one of two grand juries currently sitting in Fulton County, a longtime Democratic stronghold that encompasses much of Atlanta. But the county has a vast backlog of more than 10,000 potential criminal cases that have yet to be considered by a grand jury — a result of logistical complications from the coronavirus pandemic and, Ms. Willis has argued, inaction by her predecessor, Paul Howard, whom she replaced in January.

By contrast, a special grand jury, which by Georgia statute would include 16 to 23 members, could focus solely on the potential case against Mr. Trump and his allies. Ms. Willis is likely to soon take the step, according to a person with direct knowledge of the deliberations, speaking on the condition of anonymity because the decision is not final. Though such a jury could issue subpoenas, Ms. Willis would need to return to a regular grand jury to seek criminal indictments.

Ms. Willis’s office declined to comment; earlier this year, in an interview with The New York Times, she said, “Anything that is relevant to attempts to interfere with the Georgia election will be subject to review.”

Aides to Mr. Trump did not respond to requests for comment; in February, a spokesman called the Fulton County inquiry “the Democrats’ latest attempt to score political points by continuing their witch hunt against President Trump.”

Mr. Raffensperger made his view of Mr. Trump’s election meddling clear in a book released this month, on Election Day: “For the office of the secretary of state to ‘recalculate’ would mean we would somehow have to fudge the numbers. The president was asking me to do something that I knew was wrong, and I was not going to do that,” he wrote.

Of Mr. Trump’s call, Mr. Raffensperger wrote, “I felt then — and still believe today — that this was a threat.”

A 114-page analysis of potential issues in the case was released last month by the Brookings Institution, with authors including Donald Ayer, a deputy attorney general during the George H.W. Bush administration, and Norman Eisen, who was a special counsel to President Barack Obama. The report concluded that Mr. Trump’s postelection conduct in Georgia put him “at substantial risk of possible state charges,” including racketeering, election fraud solicitation, intentional interference with performance of election duties and conspiracy to commit election fraud.

Mr. Trump’s ongoing commentary about what took place in Georgia may not be helping his cause. In September, he held a rally in Perry, Ga., attended by thousands of followers, as well as Mr. Walker and Representative Jody Hice, who is running against Mr. Raffensperger.

At the rally, Mr. Trump recalled how he phoned Mr. Kemp, who refused his entreaties to intervene.

“Brian, listen,” Mr. Trump said he told the governor. “You have a big election-integrity problem in Georgia. I hope you can help us out and call a special election, and let’s get to the bottom of it for the good of the country.”

The Brookings authors asserted that these comments could help prosecutors establish “intent” to convince lawmakers to commit election fraud — a crucial hurdle in proving a solicitation case against Mr. Trump.

“I think he worsened his exposure with those comments,” Mr. Eisen said. “The mere fact of his conversation with Kemp is evidence of solicitation of election fraud, because Trump’s demand was based on falsehoods. By commenting on it further at the rally, he offered the prosecution free admissions about the content of that exchange.”

Trump’s Bid to Subvert the Election

Pressuring state officials to “find votes.” In a taped call, Mr. Trump urged Georgia’s secretary of state to “find 11,780 votes” to overturn the presidential election and vaguely warned of a “criminal offense.” And he twice tried to talk with a leader of Arizona’s Republican party in a bid to reverse Joseph R. Biden’s narrow victory there.

Contesting Congress’s electoral tally on Jan. 6. As the president continued to refuse to concede the election, his most loyal backers proclaimed Jan. 6, when Congress convened to formalize Mr. Biden’s electoral victory, as a day of reckoning. On that day, Mr. Trump delivered an incendiary speech to thousands of his supporters hours before a mob of loyalists violently stormed the Capitol.

Ms. Willis has said a racketeering charge is on the table. Such cases are often associated with prosecutions of mob bosses, using the federal Racketeer Influenced and Corrupt Organizations Act, known as RICO, and Georgia has its own state version of the law.

“I always tell people when they hear the word racketeering, they think of ‘The Godfather,’” Ms. Willis said earlier this year, explaining that the concept could also extend to otherwise lawful organizations that are used to break the law. “If you have various overt acts for an illegal purpose, I think you can — you may — get there.”

One of her best-known prosecutions came in 2014 when, as an assistant district attorney, she helped lead a racketeering case against a group of educators involved in a cheating scandal in the Atlanta public schools.

“Fani’s personal experience with RICO cases will be a tremendous benefit,” said Gwendolyn Keyes Fleming, an author of the Brookings report and a former district attorney of neighboring DeKalb County.

Building a racketeering prosecution in the election case would require prosecutors to detail an organized effort by Mr. Trump and his allies. One of them, Senator Lindsey Graham, called Mr. Raffensperger last November and asked whether all mail-in votes could be thrown out in counties with high rates of questionable ballot signatures. On Dec. 3, Mr. Trump’s personal lawyer, Rudolph W. Giuliani, appeared before a State Senate subcommittee, repeated conspiracy theories and pressed for the appointment of an alternative, pro-Trump slate of electors. He later made similar requests before a state House committee, saying Atlanta elections officials looked like they were “passing out dope, not just ballots.”

In late December, Mark Meadows, then the White House chief of staff, made an unannounced visit to Cobb County with Secret Service agents in tow, to view an election audit in process. (“It smelled of desperation,” a top aide to Mr. Raffensperger, Gabriel Sterling, has said. “It felt stunt-ish.”) Around the same time, Mr. Trump called Mr. Raffensperger’s chief investigator, asking her to find “dishonesty” in the election. He also called Chris Carr, the state attorney general, asking him not to oppose a lawsuit filed by the Texas attorney general challenging the election results in Georgia and other states.

Some testimony in the congressional proceedings has already been of interest to state investigators, including that of Byung J. Pak, a former U. S. attorney in Atlanta who has told the committee that he resigned in January after learning that Mr. Trump planned to fire him for declining to spread falsehoods about rampant voter fraud in Georgia.

Mr. Graham’s office declined to comment. Mr. Giuliani’s lawyer, Robert Costello, said he did not have time to discuss the case.