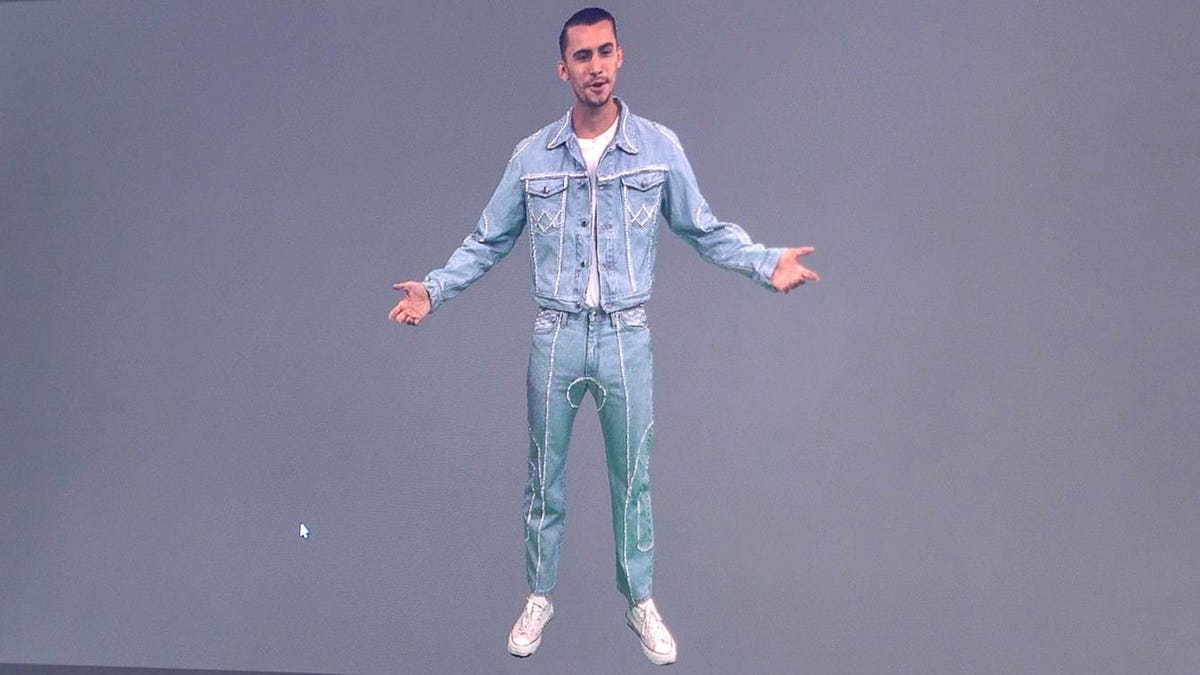 “Presence is everything.” So says Nigel Tierney, Head of Content for immersive tech incubator Yahoo Ryot Lab, and the creative director helming the media giant’s second season as NYFW’s official innovation partner. Referring to more than just eyeballs, today the lab kicks off a three-part WebAR-based transmedia activation that will hurl British fashion designer Christian Cowan, in the form of a hyperreal 360°-viewable hologram, directly into the homes of fans anywhere and everywhere.

After 18 months of living so digitally almost everyone has succumbed to the murky-sounding ranks of the Extremely Online, delivering a palpable humanised presence is indeed the name of the virtual brand experience game.

In a project currently focussed on scale, accessibility and populist luxe – the latest tribute to democratising luxury for fashion fans fatigued and frustrated by traditional catwalk shows (Cowan says “he wants this to be party where everyone is invited”) ­– here’s how it works and where future iterations may tread, from holograms fit for consumer creators to experiences that are live, interactive, and ready to go full metaverse:

One To Many, But Make It (Kinda) Personal

The crux of the activation is an ultra-realistic, 3-dimensional hologram of Cowan constructed via 100+ volumetric capture cameras. In a process primed to satisfy the most hardcore of super fans, that’s enough to flesh him out so extensively that when viewed on a mobile or tablet in AR it’s possible to move around and inspect him in lifelike detail from every single angle.

Part one is centred on the invite to Cowan’s SS/22 show (September 10). By scanning a QR code on the designer’s website, an e-invite, or social media channels a weblink appears instantly that with just one tap surfaces his effusive digital double. Thanks to context-aware AR it’s then scaled to fit the users’ surrounds, as if teleported into their space, before delivering a ‘personal’ invitation to the show. Notably, the talk-track isn’t personalised and doesn’t change – it’s currently one-size-fits-all, so more Queen’s Speech rather than Cameo call – but there is the potential for that to be upgraded in future (more on this shortly).

Part two will occur at the show and is still under wraps, bar Tierney, whose award-winning creative chops are were honed in the entertainment industry (he was formerly senior technical director for DreamWorks) teasing that, “we’ll be offering guests a special easter egg [an unexpected ‘in-game’ bonus feature], transforming parts of Christian’s collection from a physical to a digital experience.”

Part three, to be sprung in spring 2022, is a code embedded into the tags of the physical collection that will unleash another near-perfect Cowan clone who will talk about the inspiration behind the collection and how it was made.

The aim is to create a direct line to Cowan and his charisma, albeit (currently) pre-recorded and (deliberately) mass distributed.

Unlike many previous holographic experiences, the WebAR format means there’s no requirement to download a specialist app or promise to engage with the brand beyond the activation in order to access the holographic bounty. It’s a low-grade (standard data capture only) trade-off likely to further the sense of equity.

As yet there’s also no secondary, metaverse style version of the experience requiring expensive hardware, which Tierney says is to ensure everyone, excluding those at the IRL show itself, gets the very same experience.

Other Holo-Tech Chasing the Presence Factor

As Tierney says, holographic tech – a genre inherently wedded to both fictional avatars and human impersonating digital doubles (and consumers’ rising affinity for them), is also having something of a moment thanks to its capacity to build serious presence into digital experiences often starved of a sense of intimacy or personal connection.

Other players trading on this sentiment include US hologram conferencing company Holo2go, which beamed British product designer Tom Dixon into journalists’ homes earlier this year for a live Q&A conceived to quell the boredom of Zoom monotony. And British technologists Beem, whose holographic-style AR tools are conceived to facilitate naturalistic in-person communications.

The Beem app allows anyone using a high-resolution input camera (including those on iPhones) and a green screen to broadcast themselves live into another person’s space. Like the Yahoo X Cowan activation, they appear on a device’s screen, scaled to fit the users’ surrounds. Unlike the Yahoo X Cowan activation, they’re live and interactive, but they also don’t deliver the same level of 3-dimensional wow. For now, it’s swings and roundabouts.

Getting More Bang for Your Holographic Buck

Where, from Tierney’s perspective, is this liable to go next? Firstly, there’s the possibility of holograms that can live in numerous online worlds: “Volumetric 3D content such as we’ve built can be used across any medium such as a hologram in augmented reality, a narrative experience in virtual reality, a video game, or even be ported into a 2D video or photo. Once the ‘asset’ is imported into 3D tools which are used to produce games and other immersive experiences, it is easy to generate these derivative formats.”

Secondly, there’s the promise of live and dynamic content. According to Tierney, “there is certainly the potential to stream real-time volumetric content to consumers in AR in which Christian (or any talent) would perform live from a volumetric studio streaming the volumetric capture footage directly to viewers. Viewers could ask questions in real time for Christian to answer, or they could vote in real-time on a question he asks the masses.”

A road already travelled by companies like London-headquartered Dimension Studios (Dimension is about to ‘live up’ a 2018 mixed reality concept with immersive content studio Factory 42 and Microsoft in which Sir David Attenborough gave a behind-the-scenes tour of the London’s Natural History Museum) its worth noting that Yahoo is on the cusp of creating an interactive educational hologram experience using AI and a forking narrative. It will allow students to interview career professionals displayed as holograms, seen via Microsoft’s HoloLens (mixed reality glasses). Using voice recognition, the holograms will be able to respond dynamically to almost any query.

Customizable Holos for the Metaverse’s Prosumers

Finally, there’s the possibility of personalization which, says Tierney, will boom as, “the demand increases to fill up the many metaverses that are being created today,” and will include customisable ads and malleable holograms.

“A 3D object can be used for many different components – such as creating customized ads for individuals; Christian could be rendered against the backdrop of the Eiffel tower for a Parisian consumer while showing up on The Bund for those in Shanghai. That very same digital asset can be leveraged [by fans] in gaming and maybe in your very own digital NFT asset portfolio. Most feel that ‘the metaverse won’t mean anything unless I can own a piece of it and show off to the rest of the world what I own’.”

But won’t that potentially seem small-fry in ultra-popular meta-worlds like Roblox built on the bedrock of consumer-contributors, rippling with citizen creativity?

Tierney’s response is that, “beyond the ads holograms will be able to leverage information specific to the user such as saying something as simple as ‘Hey Katie,’ to allowing a remixing of the content [perhaps the way they look or sound] the way Kanye West is letting his fans remix and interpret their own versions of his upcoming Donda album using the Donda Stem Player [for $200 it’s possible to customise any song of the album – controlling vocals, drums, bass, and samples, and also isolate parts or add effects]”.

With this manipulation of digital assets so inherent to that desire for ownership and self-expression in virtual world, the premise of creating brand new holograms also looms large. Why remix Christian Cowan if I could birth my own hologram? Tierney concurs: “I think the larger user base will be able to create their own holograms to express themselves and share in the metaverse.”

While Cowan’s desire to emulate the original New York “club kid spirit” is arguably a little off-track (mass accessibility was hardly key to that ethos) for right now, in an era when high fashion’s barriers are being dismantled on the daily, inclusivity is king and insider access has come to the fore, it’s an activation likely to travel far.