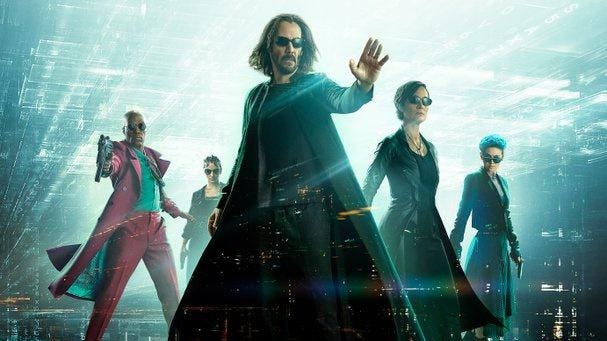 Warner Bros. dropped a new poster for The Matrix Resurrections this morning. It’s mostly a “Hey, we’re making another Matrix movie with Keanu Reeves and Carrie-Anne Moss and there are some cool new actors (including Yahya Abdul-Mateen II and Jessica Henwick) along for the ride.” It’s functional marketing, and it implies that we may be getting a second trailer soon (like attached to tomorrow’s King Richard)? The Matrix Resurrections, which debuts in theaters and on HBO Max on December 22, need only earn $369.5 million worldwide to pass The Conjuring Universe’s $2.005 billion cume and cement the sci-fi action series as the biggest R-rated series ever.

The Wachowskis’ The Matrix was a surprise sleeper smash in early 1999, earning $37 million over a Wed-Sun debut and legging out thanks to strong reviews and white-hot buzz to $171 million domestic and $467 million worldwide on a mere $65 million budget. The trendsetting and zeitgeist-defining picture was WB’s biggest global grosser ever, since Twister ($241 million domestic and $496 million worldwide on a $90 million budget) was distributed by Universal overseas in the summer of 1996. It also cemented the just-emerging DVD industry as a must-have item for younger, hipper pop culture connoisseurs by being a recent youth-and-tech-skewing blockbuster ideally suited to the new technology.

The Matrix spawned an entire sub-genre of copycats, everything from Charlie’s Angels to Shrek, and stole the pop culture thunder from The Phantom Menace (Star Wars: Episode One’s $434 million domestic/$924 million global gross notwithstanding). It was a last gasp of “original Hollywood IP” before pre-sold brands began to truly take over. The Matrix Reloaded was an old-school breakout sequel, opening four years later amid years of increased interest and goodwill with $134 million over a $91 million Fri-Sun/Thurs-Sun debut in May 2003. Reloaded (my favorite of the trilogy, natch) grossed $281 million domestic and $742 million worldwide, the biggest R-rated domestic opener and global earner ever until Deadpool in 2016.

Alas, audience displeasure made itself known six months later. The Matrix Revolutions brought the series to a pretty definitive end, killing off Neo and Trinity and ending the war against the machines not with total victory but a brokered peace (a frankly courageous conclusion just after 9/11 and in the early days of “Operation Iraqi Freedom”), in November of 2003. Cue a $48 million Wed-Sun debut and just $137 million domestic. Still, $427 million on a $150 million budget is basically tied with Shang-Chi (and obviously better than Dune), and the comparison is another sign of how Hollywood is spending more on franchise-specific tentpoles but accepting less revenue as a benchmark for success.

If The Matrix Resurrections does pull in decent global numbers, and both Shang-Chi ($225 million-plus domestic) and No Time to Die ($560 million-and-counting overseas) suggests such a thing is possible, it’ll place the four-movie Matrix series in a very rare club. The three films grossed $1.635 billion worldwide on a combined $365 million budget. If this new chapter can, ironically, essentially match Tenet ($366 million last summer), it’ll join New Line’s The Conjuring Universe (three Conjuring movies, three Annabelle films and The Nun, but not The Curse of La Llorona or Warner Bros. will yell at you, between 2013 and 2021) as just the second $2 billion R-rated franchise.

Partially due to the decline of R-rated biggies right as the overseas marketplace began to expand in the early 2000’s (more Transformers, less and Air Force One), there are only eight R-rated franchises that have topped even $1 billion worldwide. Not counting Terminator ($2 billion), Die Hard ($1.431 billion) and Alien ($1.63 billion), all of which each went PG-13 for at least one installment, the others are (sans inflation) the two Deadpool movies ($1.57 billion), The Hangover trilogy ($1.404 billion), the Detective Chinatown trilogy ($1.365 billion with most of that from China), the Fifty Shades trilogy ($1.324 billion), Resident Evil ($1.23 billion over six films) and the two It films ($1.17 billion).

Nonetheless, the big question is whether online interest in a fourth Matrix movie, a true-blue legacy sequel (even one that, by all insider accounts, colors outside the lines) is limited to online fandoms and those in the media/movie news bubble. The first trailer was flat-out spectacular, maybe the best “big” trailer of 2021, but do general audiences care about a fourth chapter 18 years after the trilogy ended with a comparative whimper? Generally speaking, decades-later sequels are on firmer/safer ground if audiences actually liked the last one. Live Free or Die Hard followed up the well-liked Die Hard: With a Vengeance but Scream 4 had to deal with the lousy Scream 3.

Can WB assure folks that Resurrections is closer in spirit to the original without selling out those of us who believe the sequels were “good, actually?” Moreover, the $427 million cume of The Matrix Revolutions would be pretty great on a Covid curve (including HBO Max and piracy concerns). It’s not even guaranteed that Matrix 4 will out-gross Sing 2 (whose predecessor earned $271 million domestic/$634 million worldwide in December 2016). We can expect a downturn for animated jukebox musical, but Sing 2 is a sequel to a recent, well-liked hit. It’s “present-tense success” versus a “nostalgic glory-chasing.” Ditto, Keanu Reeves’ John Wick: Chapter 4 opening against Tom Cruise’s Top Gun: Maverick next Memorial Day.

The Matrix was new and exciting 21 years ago. Hollywood has become, through shared fault of the studios and the audience, the kind of place that would more likely revive The Matrix than make “the next Matrix.” Can The Matrix Resurrections remain “theater-worthy” today, when films of its scale are more common, the sequels weren’t beloved? Keanu Reeves’ everlasting popularity won’t hurt, nor will its existence as (potentially) the first big non-comic book superhero, horror or kid-targeted tentpole since No Time to Die in October and F9 in late June. If the “retunr to the source” pays off, well, Warner Bros. may have its second $2 billion-plus R-rated franchise in a single year.