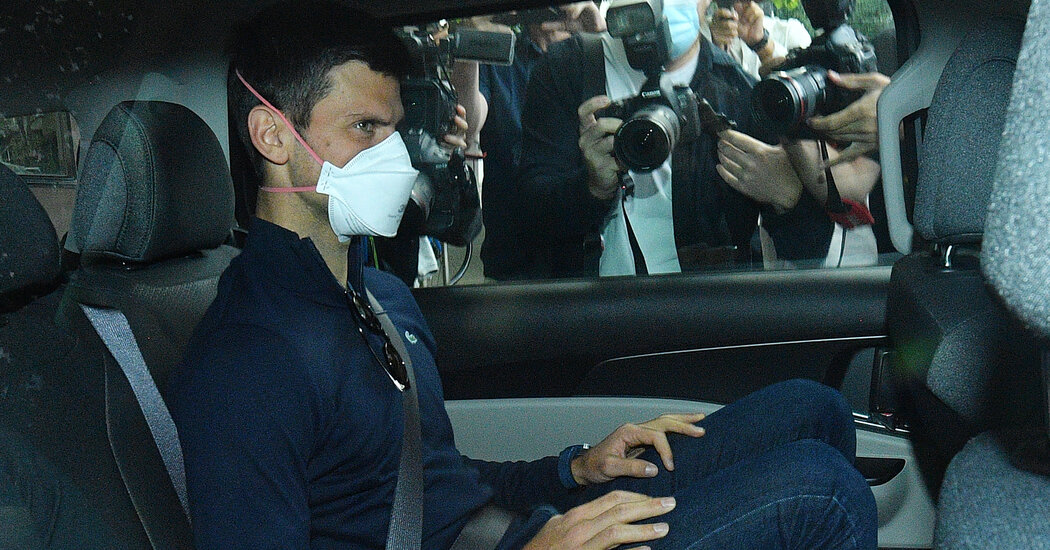 SYDNEY, Australia — The day before the Australian Open was set to begin, Novak Djokovic, possibly the greatest tennis player of all time, ran up against a group of determined opponents that no amount of talent, training, money or willpower could overcome.

He lost his final bid to stay in Australia on Sunday when a three-judge panel upheld the government’s decision to cancel his visa.

More broadly, he lost to a government determined to make him a symbol of unvaccinated celebrity entitlement; to an immigration law that gives godlike authority to border enforcement; and to a public outcry, in a nation of rule-followers, over what was widely seen as Mr. Djokovic’s reckless disregard for others, after he said he had tested positive for Covid last month and met with two journalists anyway.

“At this point, it’s about social norms and enforcing those norms to continue to get people to move in the same direction to overcome this pandemic,” said Brock Bastian, a social psychology professor at the University of Melbourne. “In this culture, in this country, a sense of suddenly upending those norms has a great cost politically and socially.”

Only in the third exasperating year of a pandemic could the vaccination status of one individual be invested with so much meaning. For more than a week, the world gawked at a conflict centered on a controversial racket-swinger, filled with legal minutiae and dramatic ups and downs.

On Sunday morning in Australia, more than 84,000 people watched the livestream of the hearing in a federal court, many of them presumably tuning in from other countries.

What they witnessed was the saga’s bizarre final court scene: a six-panel video conference with lengthy arguments, in distant rooms of blond wood, about whether the immigration minister had acted rationally in exercising his power to detain and deport.

The chief justice, James Allsop, announced the decision just before 6 p.m., after explaining that the court was not ruling on the merits of Mr. Djokovic’s stance, or on whether the government was correct in arguing that he might influence others to resist vaccination or defy public health orders. Rather, the court simply found that the immigration minister was within his rights to cancel the tennis star’s visa for a second time based on that possibility.

Just a few days earlier, Mr. Djokovic’s lawyers had won a reprieve from his first visa cancellation, hours after his arrival on Jan. 5 at Melbourne’s airport. As of Friday morning, he seemed to be on his way to competing for a 10th Australian Open title and a record-breaking 21st Grand Slam. But that initial case had never reached beyond procedure, focusing on how Mr. Djokovic was treated at the airport as border officials had held him overnight.

In the second round, his lawyers argued that the government had used faulty logic to insist their client’s presence would energize anti-vaccination groups, making him a threat to public health. In fact, they argued, anti-vaccine sentiment would be aggravated by his removal, citing protests that followed his first visa cancellation.

“The minister is grasping for straws,” said Nicholas Wood, one of Mr. Djokovic’s lawyers. The alternative scenario — that deportation would empower anti-vaxxers — “was not considered,” he maintained.

Mr. Wood also disputed the government’s claim that Mr. Djokovic, 34, was a well-known promoter of vaccine opposition. The only comments cited in the government’s court filing, he said, came from April 2020, when vaccines had not yet been developed.

Ever since then, his lawyers added, Mr. Djokovic had been careful to say very little about his vaccination status, which he confirmed only in his paperwork for Australia’s medical exemption.

“There was no evidence before the minister that Mr. Djokovic has ever urged any others not to be vaccinated,” they wrote in a court filing before Sunday’s hearing. “Indeed, if anything, Mr. Djokovic’s conduct over time reveals a zealous protection of his own privacy rather than any advocacy.”

The case, though, ultimately turned on the immigration minister, Alex Hawke, and his personal views. Justice Allsop pointed out in court that Australian immigration law provided a broad mandate: evidence can simply include the “perception and common sense” of the decision maker.

Stephen Lloyd, arguing for the government, told the court it was perfectly reasonable for the immigration minister to be concerned about the influence of a “high-profile unvaccinated individual” who could have been vaccinated by now, but had not done so.

He added that the concern about Mr. Djokovic’s impact went beyond vaccination, noting that Mr. Djokovic had not isolated after he said he tested positive for Covid in mid-December, meeting instead with two journalists in Belgrade. The government, Mr. Lloyd said, was worried that Australians would emulate his disregard for the standard rules of Covid safety if he were allowed to stay.

“His connection to a cause whether he wants it or not is still present,” Mr. Lloyd said. “And his presence in Australia was seen to pose an overwhelming risk, and that’s what motivated the minister.”

The court sided with the government, announcing its decision without immediately detailing its reasoning.

The Novak Djokovic Standoff With Australia

How it started. The standoff began when Djokovic received an exemption that would allow him to defend his Australian Open title. Upon arrival, federal officials said he did not meet the requirements for entry because he was unvaccinated, and canceled his visa.

What happens next. It is unclear what will happen at the next major tournaments on the men’s tour, but the standoff in Australia presages some of the headwinds Djokovic could face if he attempts to travel the world without being vaccinated for Covid-19.

While Prime Minister Scott Morrison welcomed the decision (“strong borders are fundamental to the Australian way of life,” he said), some legal scholars said the end result, and the back-and-forth that preceded it, should be cause for shame in Australia.

“The saga has exposed much long-running dysfunction and injustice in the Australian system: excessively strict, byzantine and unpredictable entry rules, but paradoxically special treatment through exemptions for the rich and famous,” said Ben Saul, a professor of international law at the University of Sydney.

He added that the case showed how the immigration minister’s “god powers” were essentially “unreviewable by the courts” and often led to “the unnecessary, obsessive and cruel detention of foreigners.”

Human rights lawyers suggested that the reasoning behind the visa cancellation — made in the heat of an election year by a government struggling to manage the latest Covid outbreak — could even lead later to the suppression of free speech.

Mr. Djokovic said he was “extremely disappointed” by the court’s ruling, but would comply and leave the country.

In Serbia, the decision drew another round of scorn.

“The Australian government’s conduct toward him has been utterly disgraceful,” Vuk Jeremic, the Serbian foreign minister from 2007 to 2012 who later served as the president of the United Nations General Assembly, said in an email.

He called the entire case an example of politicized harassment. “Novak is a victim of brinkmanship by shameless populists, exclusively driven by snap opinion polls,” he said.

Recent polls have in fact shown that a majority of Australians supported Mr. Djokovic’s removal. Even some of the most die-hard sports fans have said that the world’s top-ranked male player never should have been allowed to come without being vaccinated.

But in many ways, the Djokovic drama — with its squabbles over state and federal jurisdiction, its flawed communication from Open organizers, and all of the attention paid to a star while the average Australian couldn’t find at-home Covid tests in pharmacies — has left nearly everyone involved looking bruised and foolish.

Players and fans have now been left wondering how this year’s Open will be remembered: for the tennis, or for the “Djokovic affair”?

“It’s a tricky situation we’ve got ourselves into,” said Mr. Bastian, the social psychologist. “We have a strong sporting identity as a nation and the way that part of our identity gets represented in the world is important to us. If that is tarnished, we’ll take notice.”