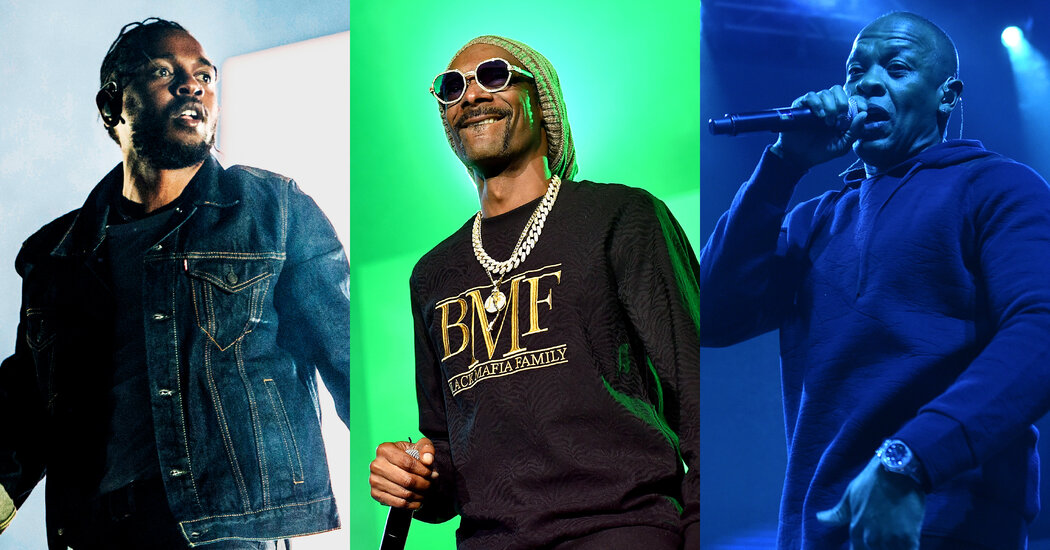 [Read how the Los Angeles Rams won the Super Bowl.]

On Sunday at SoFi Stadium in Inglewood, Calif., the Super Bowl halftime show will feature the local rap heroes Dr. Dre, Snoop Dogg and Kendrick Lamar, placing hip-hop firmly at the center of the annual spectacle, which is routinely watched by more than 100 million people, for the first time.

The show, which is being produced in part by Jay-Z’s entertainment and sports company, Roc Nation, will also star Eminem and Mary J. Blige, but it will not be the first to include rap music. The genre has taken a rocky, roundabout path to headliner status at the Super Bowl, with this year’s event coming at an increasingly fraught moment for the N.F.L. regarding race.

That baggage is nothing new: At least since 2016, when the quarterback Colin Kaepernick began kneeling during the national anthem to protest police killings of Black people, the league has faced questions about its commitment to diversity and social justice, on the field and off. More than 70 percent of the league’s players are Black, but the N.F.L. has no Black owners and, until recently, only one Black head coach. This month, Brian Flores, the Miami Dolphins head coach who was fired last month, sued the league, claiming he and others had been discriminated against in the hiring process.

Those debates have trickled into its entertainment business. In 2017, well before his company partnered with the N.F.L., Jay-Z turned down an offer to perform at the Super Bowl, and reportedly urged others to do the same. In subsequent years, with Jay-Z declaring “we’ve moved past kneeling” to some backlash among players and fans, Roc Nation has booked pop extravaganzas featuring the Weeknd, Jennifer Lopez and Shakira.

But Dr. Dre and Snoop Dogg — while among the most recognizable hip-hop veterans with decades of hits and pop culture cachet between them — represent something different, and that may be the idea. “At one point, Dre was in a group that was banned by popular culture,” said Will.i.am of the Black Eyed Peas, which headlined the show in 2011, referencing the widespread controversies of Dr. Dre’s early gangster rap act N.W.A.

That the N.F.L. has now turned to these once-controversial figures with their own checkered pasts may seem far removed from the days of pearl-clutching regarding Janet Jackson’s 2004 wardrobe malfunction, M.I.A.’s middle finger in 2012 and Beyoncé’s nods to the Black Panthers in 2016. But some say it’s also indicative of the league’s long, jagged journey to embrace Black music and culture — especially rap — as well as its need to shore up its community bona fides now.

“The N.F.L. is positioning the halftime show as a meaningful occurrence,” Dr. Ketra Armstrong, a professor of sport management at the University Michigan and the director of the Center for Race & Ethnicity in Sport, said in an interview. “But to some, it seems performative for the N.F.L. to feature these artists. It feels like window dressing. You’re using Black talent to entertain the masses, but what are you doing that would honor the essence of hip-hop, like addressing racial injustices in the communities that have bred this labor force of Black talent?”

The Super Bowl halftime stage was not always a place for hitmakers. In 1967, with popular music venturing into daring directions, a television audience of about 51 million watched the University of Arizona Symphonic Marching Band perform a selection of tunes including the Dixie anthem “Waiting for the Robert E. Lee.”

Other marching bands had the spotlight for years, as did avatars of safe, family-oriented entertainment, like Andy Williams and Carol Channing. No rock performer played the halftime show until 1988, almost seven years into the MTV era, when the oldies act Chubby Checker twisted at Super Bowl XXII. Three year later, New Kids on the Block would become the first contemporary pop group to perform at the event, and the show remained blandly middle-of-the-road until Michael Jackson’s powerhouse performance in 1993.

In the years that followed, established greats like Diana Ross and Stevie Wonder dominated, sometimes with more modern acts like Gloria Estefan and Boyz II Men as guests, though the burgeoning hip-hop of the 1990s remained absent. When Queen Latifah joined the Motown tribute in 1998, she performed “Paper,” one of her first songs to not feature any rapping.

The next modern M.C. to take the Super Bowl stage was Nelly in 2001, as part of a larger ensemble of pop figures. He returned in 2004 and was joined by P. Diddy, bringing more contemporary rap to the performance than ever before. But that was also the year that changed everything: After a medley of appearances by Diddy, Nelly and Kid Rock, Janet Jackson sang, among other songs, “Rhythm Nation” — an idealistic ode to unity and Black power (“Join voices in protest/To social injustice”) — before finishing the show by duetting with Justin Timberlake on his hit “Rock Your Body.” Just before the commercial break, Timberlake put his hand on Jackson’s costume, pulled at it and exposed her right breast, triggering a national uproar.

For years after, the Super Bowl halftime producers retreated to the safety of classic rock: Paul McCartney, the Rolling Stones, Tom Petty, Bruce Springsteen and the Who all performed. It was during that period of careful conservatism that Will.i.am saw an opening.

“I flew out to New Jersey, went to the N.F.L. headquarters, and I pitched the Black Eyed Peas,” he said in an interview. “We weren’t, like, ‘Yo, we’re family friendly!’ Or ‘We rated PG, bro.’ My pitch was, ‘You know you need to have pop on the halftime show again.’” It wouldn’t be long, he warned the N.F.L., before they ran out of classic rock bands.

In 2011, the Black Eyed Peas got the gig, inching the N.F.L. back toward the modern mainstream. But concerns about putting on a show palatable to all audiences lingered. “There’s a girl in our group,” Will.i.am said, referring to the singer Fergie. “They were nervous about that,” he said, and “checked our wardrobe like we were going through freakin’ security at the airport.”

“You’ve got to understand the circumstances, and the walls that were up,” Will.i.am added. “We cracked open the door to get the N.F.L. out of that fear of pop and urban music after a seven-year break of only going legacy. To now have everybody from Bruno to Beyoncé to Dre and Snoop — talk about a total perspective change on the importance of diversity and inclusion,” he said, referring to Bruno Mars, who headlined in 2014 and returned as a guest two years later.

Yet even as rap slowly regained its place on the Super Bowl stage — with Nicki Minaj, Missy Elliott, Travis Scott and Big Boi all making cameos in the last decade — questions linger about whether the music and its messages can transcend the 12-minute show now that the genre is taking prominence.

“The N.F.L. is trying to look better by celebrating hip-hop, but they need to do better,” said Dr. Armstrong, the professor. “I’m hoping the artists are going to use their own power and influence to get them to do so.”

A Brief History of Hip-Hop at Halftime

When in doubt, it’s always safe to program something nostalgic, like a salute to Motown’s 40th anniversary (the label was founded in 1959). The featured acts were the Temptations, Smokey Robinson, and Martha and the Vandellas. To balance the generational appeal, they were joined by the label’s then top current act — the throwback harmony group Boyz II Men — as well as the Motown rapper Queen Latifah, who sang a new-jack-swing-inspired version of “I Heard It Through the Grapevine.”

The St. Louis rapper Nelly, who’d released the breakout Top 20 pop hit “E.I.” in 2000, was an afterthought on this bill, which featured the rock band Aerosmith, then in its fourth decade, and the peppy pop phenoms ’N Sync. The two groups alternated songs, then united for the big finale, “Walk This Way,” joined by Britney Spears, Mary J. Blige and Nelly, whose “E.I.”/”Walk This Way” mash-up included only half of his first verse. Total camera time for rap: 18 seconds.

Three years later, Nelly returned and performed his No. 1 hit “Hot in Herre,” which urged listeners to “take off all your clothes.” Combined with Kid Rock and P. Diddy, there was far more rap included than in any previous Super Bowl show. But this infamous halftime show is mostly remembered for the Janet Jackson and Justin Timberlake incident, in which her breast was mostly exposed. Not long after, Jawed Karim, a computer science and engineering student, grew frustrated at how difficult it was to find a clip of that moment online, and sensing a market niche for a video-sharing site, soon helped found YouTube.

The N.F.L. disappeared pop music from the halftime show for several years, eager to avoid bad publicity or Congressional criticism. But the supply of widely beloved rock stars was limited, and Ricky Kirshner, in his debut as the show’s producer, brought in the pop-rap group Black Eyed Peas. The group dashed through their many hits while leaping around a set that looked like a “Tron” reboot. And in the Super Bowl’s attempt at broader appeal, Slash of the rock band Guns N’ Roses played guitar while Fergie, of the Black Eyed Peas, sang the band’s ferocious “Sweet Child O’ Mine.”

Madonna headlined the show in a gladiator’s cingulum — with ample help from the briefly massive party-rap duo LMFAO; the rapper and singer Cee Lo Green; and Nicki Minaj and M.I.A., two inventive rap talents who’d recently recorded “Give Me All Your Luvin’” with Madonna. M.I.A.’s verse had a few expletives, which were bleeped out, and in their stead, she raised her left middle finger to the camera. The F.C.C. reportedly received more than 200 complaints, about one for every 450,000 viewers. The N.F.L. apologized to its audience and filed arbitration claims seeking $16.6 million from M.I.A., whom they said violated a contract requiring her to comply with anti-profanity standards. This prompted M.I.A. to tweet at Madonna, “Can I borrow 16 million?” The conflict was settled out of court for an undisclosed amount.

In the most-watched halftime show ever, with nearly 115 million viewers, the headliner Katy Perry was joined by Lenny Kravitz for a rocking rendition of her hit “I Kissed a Girl,” but the true second banana was Missy Elliott, who performed parts of three of her tracks: “Get Ur Freak On,” “Work It” and “Lose Control.” The pairing of Perry and Elliott seemed more natural than other shotgun marriages, because both are pop surrealists. More than two years later, Elliott tweeted that she’d been in the hospital the night before the Super Bowl, and when her first song started, “I was SO SHOOK. I said Lord I can’t turn back now.”

In solidarity with Colin Kaepernick, a number of Black artists were rumored to have turned down offers to perform in 2019. Instead, Maroon 5 headlined with guest spots from Travis Scott and Big Boi of Outkast. “It’s what it is,” the Maroon 5 singer Adam Levine said after people criticized the band and accused it of violating a boycott. “We’d like to move on from it.”

The N.F.L. knew it had to fix its relationship with hip-hop, and partnered with Jay-Z and Roc Nation to produce the Super Bowl halftime show. Kaepernick “was done wrong,” Jay-Z told The New York Times. “But it was three years ago, and someone needs to say, ‘What do we do now — because people are still dying?’” The headliners were Shakira, a Roc Nation management client, and Jennifer Lopez: two Latina women who have released albums in Spanish as well as English. They were joined by Bad Bunny, a Puerto Rican rapper and singer; and J Balvin, a Colombian who brought reggaeton, rap’s younger Spanish-speaking cousin from the Caribbean, to the Super Bowl stage.