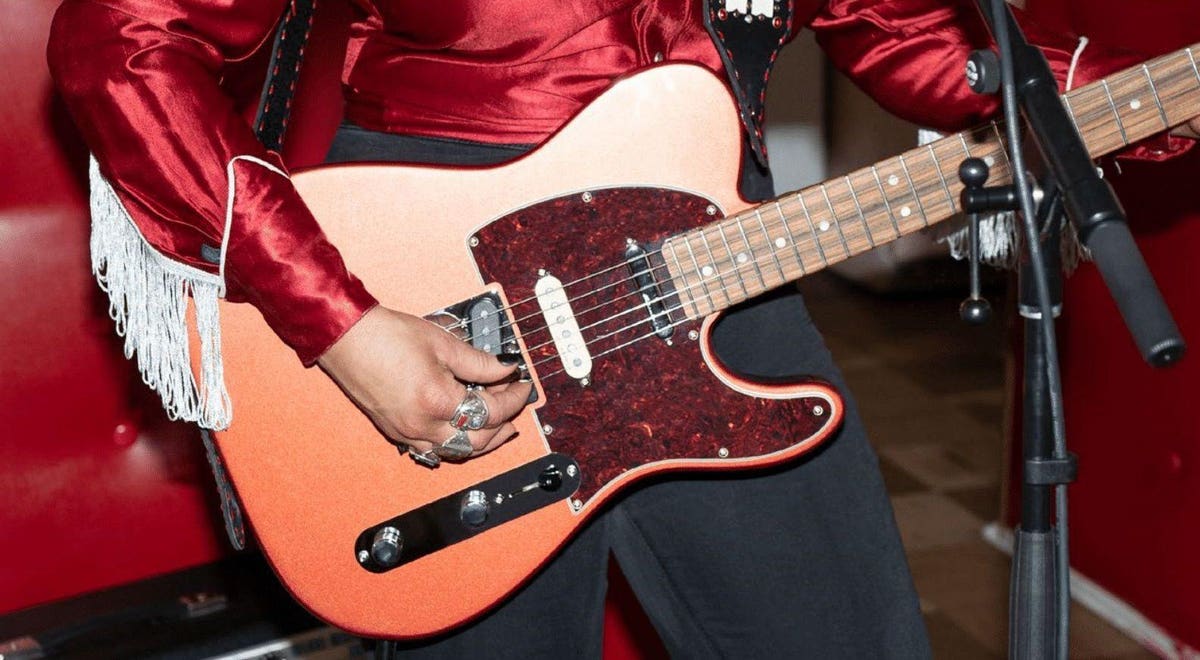 Before the pandemic hit, little seemed more IRL than live music and the instruments used to make it. Then everything changed, including for vaunted instrument maker Fender, whose Telecaster and Stratocaster guitars have been crucial parts of the sonic landscape of rock, pop and other music.

Now the brand, which was founded in 1946 and is headquartered on Sunset Boulevard in Los Angeles, is adapting to a new world of online performance, constant recording, and new platforms for music discovery.

Tops on that list is TikTok, the vast and hypnotic short-form video service that has broken into the mainstream during the pandemic. Now, Fender is launching its own presence on the site, said Fender Chief Marketing Officer Evan Jones.

“We’re excited to jump in there,” Jones said. “I think we’re gonna probably be the first guitar brand to really commit to doing that in a big way. But I would argue we’re probably already a little late in the game on that one.”

That’s because TikTok has become such a hugely fertile ground for up-and-coming musicians to break songs and make a name for themselves.

TikTok fueled the success of one of the most successful singles of all time, Lil Nas X’s Ol’ Town Road. More recently, former Disney child star Olivia Rodrigo saw her debut single, Driver’s License, take off on TikTok, paving the way for a No. 1 album, Sour, that was among the summer’s best reviewed and most popular collections.

Behind success stories like that are countless other musicians, many of whom already have relationships with Fender, and many others whom it needs to reach, Jones said.

“Music is such a key element of how the TikTok community shares and digests content,” Jones said. “We’ve seen a tremendous number of people already on the platform that we’re just looking to connect with and look to engage and serve with content and also amplify, and honestly, kind of celebrate. So it’s for us a pretty logical extension.”

The company has a pretty good head start for success on TikTok; Jones said #Fender has been used as a hashtag on the platform 160 million times, and that’s before the launch of its own official account.

The company is already on most of the other big social-med platforms, Instagram, Facebook, a thriving YouTube presence. Facebook even has a user group dedicated to new players. And while the YouTube site has more than 1 million subscribers, Jones suggests it could “easily be four or five times the size of what it is today.”

To drive that, the company is moving beyond product marketing into more “serialized content,” including a dedicated space where new players can complement their learning when they’re not using the company’s subscription Fender Play teaching app. That programming can range from performances, to techniques and tips, to behind-the-scenes studio material as a producer builds a track from scratch.

“We’ve started developing different serialized pilots that are getting great traction, and we will rack up hundreds of thousands of views per day, depending on the artist and depending on the topic,” Jones said. “We’re trying and testing out all sorts of new forms of content that allow, y artists to share their art and players to get a deeper look insight how music is created. But we also take it beyond just the product and really into a lifestyle of what it means to be a player.”

Expect more investment in the Fender Play app, too, which Jones said has “hundreds of thousands” of active users. In particular, the company is focusing on the learning experience in the first few months of using the app to learn guitar, bass or ukulele. In the early days of the pandemic, the company gave away access to the app, and more than 1 million people signed up.

“We’re now in a position where we’re really thinking much more broadly about what are all the tools that players need, above and beyond the guitar and amp and Fender Play,” Jones said. One hot area is digital amps, where players connect their guitar to a phone or tablet to record and create music.

“We think that there’s a really big future there, especially with a new generation of players who are growing up looking at the mobile phone and their laptop as the epicenter of their studio and not the garage and the giant recording deck. That’s a seismic shift. And we’re actively investing in all of it, because we just see that as nothing but great news.”

Part of what’s driven the shift to more social-media marketing and online presence is a shift in how the company sells its products. E-commerce has flipped from 30 percent of sales to something closer to 70 percent, Jones said. But it’s also being driven by the shifting demographics of who’s buying those Fender instruments.

“It’s way more female and a lot younger than it used to be even 20 or 30 years ago,” Jones said. “And so part of the win for us is to connect and engage a whole up-and-coming generation of musicians, artists, and creators who are already using guitar as part of what they do, or maybe are using other forms of musical expression and haven’t thought about guitar.”

The digital push is supporting the company’s creation of new gear for a more digitally minded generation. This week, the company debuted a lineup of revamped classics called the Player Plus Series, at prices between about $1,000 and $1,150 each.

It’s an upsell, Jones said, from the Player Series of instruments the company launched in 2018, with noiseless pickups, “smooth rolled edges” on the neck for more comfortable playing, eye-catching new colors, and other improvements specific to one or another of seven new models of the Telecaster, Nashville Telecaster, Stratocaster, Stratocaster HSS, Jazz Bass, Precision Bass and Jazz Bass V.

The Stratocaster HSS, for instance, comes with a humbucking pickup in the bridge for “extra output,” as the company puts it, that can be split into single coil tones with a push-pull control, while two other pickups in the neck and middle provide “a bright and touch-sensitive classic Strat tone without the hum.”

It’s those noiseless pickups that are an explicit recognition of the changing nature of the people who want to play guitar and bass, Jones said. They don’t want that hum of classic Fenders on their pristine digital recordings.

“We’ve seen the number of people coming into guitar growing pretty dramatically over the last five or six years,” Jones said. “And the aspiration has shifted some. It used to be lead front woman, front man on stage with a guitar, ripping solos. That’s evolved. It’s as much about an input device for the studio as it is a songwriting tool. Now you see artists across multiple genres really looking to leverage live instruments and everything we do for that authentic form of expression.”

“This is a great opportunity to shine a spotlight on the artists that we think are doing something really special and elevate them across our channels and beyond,” Jones said. “Hopefully in return for that we can give them a platform to amplify the music, grow their audiences, frankly accelerate their own musical journeys. This is gonna be one of our biggest priorities really for the next nine months through to the middle of next year. And it’s all part of a global effort to build awareness for the (Player Plus) series, but really also showcase the amazing artists who are all part of where the customers are going.”

Other artists in the Fender initiative include budding country star Hannah Dasher, who built a formidable TikTok presence (1.3 million followers) mixing her music, big hair, and syrup-thick Southern accent with quick cooking lessons and delivered the drolly titled EP The Half Record this year.

Similarly, bass-playing bedroom pop musician Blu DeTiger’s TikTok following boosted last year’s Figure It Out into the stratosphere before she delivered this year’s EP How Did We Get Here.

“Blu DeTiger is a really great example,” Jones said. “She’s got over 1 million followers, she already knows more about how to activate on TikTok than we do. But you know, in working with her and staying true to her art and just helping to amplify her voice, we’re going to learn a lot about what motivates TikTok users to engage.”