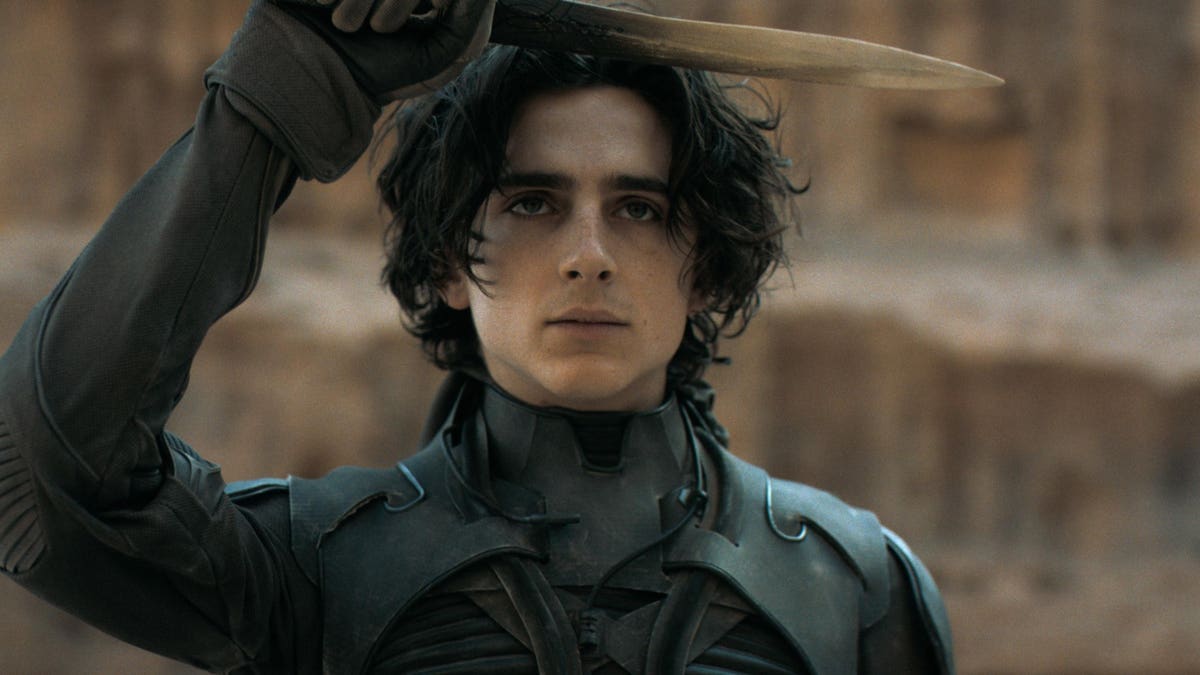 Warner Bros.’ marketing deserves a round of applause. The Dream Factory successfully opened Legendary and Denis Villeneuve’s 2.5 hour, action-lite, well-reviewed, ponderous and somber sci-fi political melodrama as a “worth seeing in theaters” cinematic attraction. While a $41 million domestic debut (plus around $3.65 million on Monday) is at best a moderate victory, it could have been much worse. It’s a better Fri-Sun debut than the $30 million opening for Edge of Tomorrow, the $32 million launch for Blade Runner 2049 and the over/under $18 million launches for Jupiter Ascending and Valerian and the City of a Thousand Planets. WB excels at turning less conventional event films like Magic Mike, Gravity, American Sniper, It, A Star Is Born and/or Crazy Rich Asians into blockbusters. But is the Timothée Chalamet and Zendaya’s Dune (review) a hit?

That’s a complicated question, one made more so by the frankly indecisive weekend grosses ($30 million would have been a whiff, $50 million would have been a win but $40 million is right in the middle), the HBO Max availability (which earned 1.9 million households on opening weekend according to SambaTV, right between The Conjuring 3 and Space Jam 2) and the streaming war-era demand for new IP-centric franchises. There is optics-related value in green-lighting a sequel even if the theatrical grosses wouldn’t justify it. It would also help position Dune as a shiny new multiplatform IP and would automatically make Denis Villeneuve’s sci-fi epic look like a success merely via getting a sequel. It would let AT&T avoid admitting that they kneecapped the likes of Dune and Wonder Woman 1984 to boost HBO Max.

If Dune legs out like The Suicide Squad ($56 million/$26 million), it’ll barely get past $85 million. However, if it legs out like at least Blade Runner 2049 ($92 million/$32 million), it’ll get to around $115 million. Obviously if it legs like Quentin Tarantino’s 2.5-hour, adult-skewing, action-lite Once Upon a Time… In Hollywood ($142 million/$41 million), this is a very different conversation. In a skewed example of how strange the expectations are right now, Warner Bros. may be able to spin a domestic performance on par with Batman & Robin ($108 million from a $43 million debut) as a success. With $223 million worldwide, it’s looking at a global finish between $371 million (Edge of Tomorrow, not a hit on a $178 million budget) and $409 million (The Mummy, Universal’s first and only Dark Universe flick).

Would $355-$415 million worldwide be above Covid-era expectations? Probably, especially after Villeneuve’s Blade Runner 2049 (another 2.5-hour, adult-skewing, action-lite sci-fi drama) earned $259 million on a $155 million budget. Would that meet pre-Covid justifications for a sequel? We’re still waiting on a sequel to Alita: Battle Angel ($405 million on a $170 million budget). Moreover, a $41 million opening is on par with Tomorrowland, Power Rangers and Independence Day: Resurgence, none of which had legs or spawned sequels. Despite chatter about how streaming and Hollywood’s reliance on IP has changed what constitutes a sequel-worthy performance, the old rules still mostly apply. Pacific Rim: Uprising and The Huntsman: Winter’s War both bombed partially because Pacific Rim and Snow White and the Huntsman weren’t hits. Just being popular online (John Carter, Dredd, Speed Racer, etc.) isn’t enough.

Folks arguing “But… Austin Powers!” forget that International Man of Mystery earned four times its $17 million budget ($68 million) worldwide. The Bourne Identity had to earn $214 million on a $60 million budget before it could become an uber-popular DVD title and spawn The Bourne Supremacy. Ditto John Wick ($88 million on a $30 million budget) spawning John Wick: Chapter 2 ($172 million/$40 million). The one exception is Batman Begins, which earned rave reviews and long domestic legs but still “only” grossed $371 million on a $150 million budget. Expectations, and post-theatrical revenue streams were different then, but using the “Batman Begins to Dark Knight” model didn’t work for Amazing Spider-Man or Star Trek. Dune could still be a new test case for the new normal in terms of multi-platform franchise building.

Warner Bros. would like HBO Max-specific content based around the Dune franchise. Heck, The Many Saints of Newark is now a retroactive down payment on David Chase crafting a Sopranos-related episodic for HBO Max. Much of the current consolidation and pursuit of other studios’ IP is partially motivated by the belief that (for example) Amazon can successfully develop or nurture MGM’s existing IP where others have failed. So too is the current IP pursuit rooted in the notion that even an unsuccessful movie can spawn a successful streaming show. Can a financially unsuccessful theatrical film spawn a successful streaming show than a box office blockbuster? We’re going to find out in a few years. Ditto, slight digression, the presumably theatrical sequels to Covid-era box office underperformers like Cruella, Jungle Cruise, Dune and Wonder Woman 1984.

With less emphasis on per-content viewership on a subscription-based streaming service, is Solo ($394 million on a $275 million budget) worth it if a “young Lando” TV show brings new subscribers to Disney+ (or helps retention with a greater volume of Star Wars and Marvel content)? Is the theatrical failure of Macgruber, a net-positive if the decade-later Peacock show boosts subscriptions or retention? Is James Gunn’s well-liked but commercially doomed The Suicide Squad ($168 million/$185 million) a worthy investment if the Peacemaker television show boosts HBO Max in terms of subscriptions, retention and/or positive media coverage? Is giving us Denis Villeneuve’s Dune part Two even if the global grosses and related variables (like post-debut legs) wouldn’t otherwise justify it merely to create the impression of success for Diane Ademu-John’s Dune: The Sisterhood?

I don’t know the answers to these questions. Some television offshoots may be more successful than others. Some of this may remain hypothetical until we get more viable streaming viewership data. Maybe Occam’s Razor applies and Peacemaker will be no more successful (relatively speaking) than The Suicide Squad, or folks flocking to MacGruber would have shown up even without the 2010 feature film. Maybe the best way to gauge whether Dune is a commercial success is as “simple” as whether it makes money (or how much it loses on an understandable Covid curve) in its global theatrical run, and everything else is static. If that’s the case, well, I’m old enough to remember when The Golden Compass unofficially marked the end of New Line as an independent entity by earning $375 million on a $180 million budget.

Unless it drops like a rock next weekend and has poor HBO Max viewership, we’ll probably get a sequel. Beyond selling a narrative of success, having a full five-hour Dune movie is arguably more valuable for HBO Max and Warner Home Video than having a 2.5 hour movie that ends on a cliffhanger. Moreover, history shows (Twilight: Breaking Dawn part II, Avengers: Endgame, etc.) that if audiences show up and enjoy Dune part One, they’ll show up in bigger numbers for Dune part Two. Dune part Two also won’t be released concurrently on HBO Max in the middle of a pandemic. But that doesn’t mean it’s going to be an actual “makes money” hit, at least not by pre-Covid standards. If it’s not, then where the IP goes from here could determine if raw profitability even matters for multiplatform franchise filmmaking.