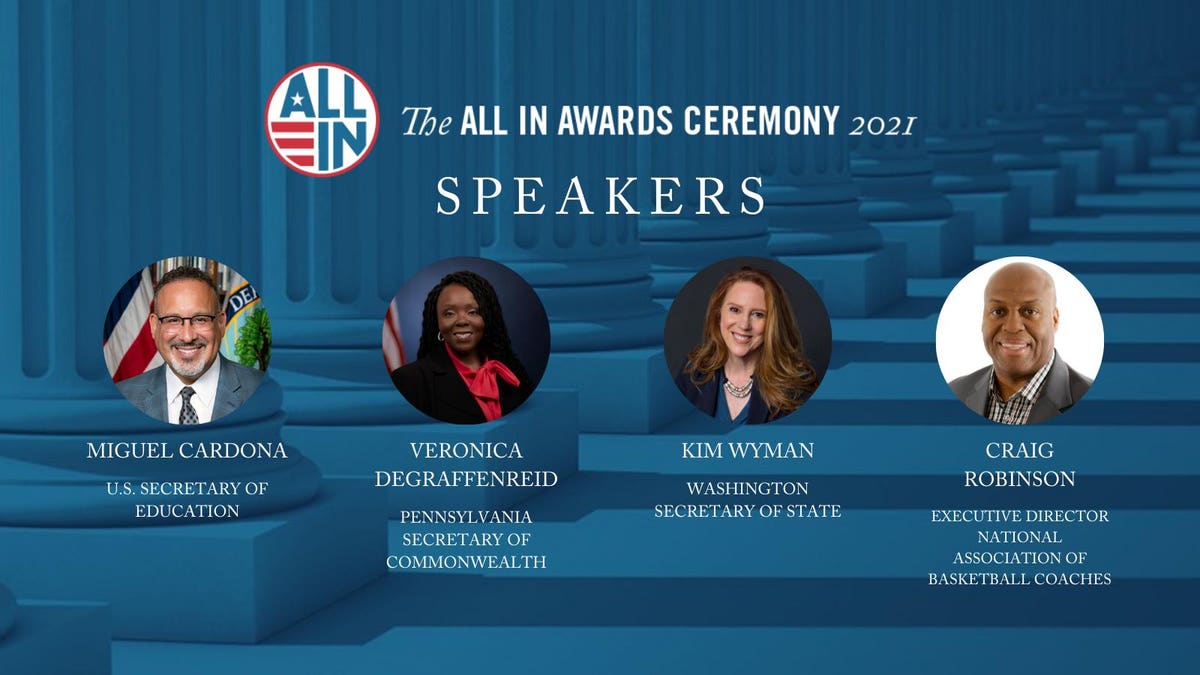 College students turned out to vote at a record rate of 66 percent in 2020; a rate 14 points higher than in  2016 and on par with the general population. This week, the ALL IN Campus Democracy Challenge celebrated this success and recognized colleges and universities and the students, faculty and staff, presidents and chancellors, coaches, partner organizations, and election officials that helped ensure that college students across the country were able to register to vote and cast informed ballots despite a global pandemic.

The ALL IN Challenge believes in developing a more inclusive democracy. We envision a country in which the electorate mirrors our country’s makeup and college students are engaged in our democracy on an ongoing basis, during and between elections, and not just at the polls. The 840 participating campuses in the Challenge are leading the way, helping us to reach these goals and realize this vision. Together they are cultivating generations of engaged and informed citizens, who are essential to a healthy and thriving democracy.

Over the course of three virtual ceremonies from November 8-10, ALL IN honored participating colleges and universities who demonstrated excellence in nonpartisan student voter engagement based on data from the Institute for Democracy and Higher Education’s National Study on Learning, Voting, and Engagement.

More than 19 awards were announced during the main ceremony on November 8, including for highest voter registration and highest voting rates as well as for standout students, faculty, administrators, and partners. U.S. Secretary of Education Miguel Cardona keynoted the event and attendees were welcomed by Civic Nation CEO Kyle Lierman.

ALL IN Awards Ceremony Event speakers included U.S. Secretary of Education Miguel Cardona, Veronica Degraffenreid the Secretary of the Commonwealth of Pennsylvania, Kim Wyman the Washington Secretary of State, and Craig Robinson the Executive Director of the National Association of Basketball Coaches.

After reviewing 2020 student voting data submitted by participating campuses, ALL IN declared that  St. Olaf College (MN) took the top honor of Highest Voting Rate of all participating campuses, with a voting rate of 87.6 percent. College of the Holy Cross (MA) received the Champion Award for Most Improved Voting Rate with a 35.9 point increase in its voting rate from 2016 to 2020. ALL IN also awarded 47 platinum seals to campuses with a voting rate between 80 and 89 percent in the 2020 presidential election and recognized Denison University with an award for the highest voter registration rate. Spelman College (GA) earned a champion award for highest voter turnout at a Historically Black College or University and Inver Hills Community College (MN) achieved the highest voter turnout for a participating community college.

Also honored at the ceremony were two college presidents: Donald Guy Generals of the Community College of Philadelphia (PA) and Fayneese Miller of Hamline University (MN) for their leadership in cultivating democracy and voter participation on their campuses and beyond. Faculty members Teri Platt of Clark Atlanta University (GA) and Bridget Trogden of Clemson University (SC) were recognized with Standout Faculty Awards. Students Divyansh Kaushik of Carnegie Mellon University (PA) and Alexandra Marquez from the University of Maryland College Park were also recognized. The Challenge recognized the work of Monica Clarke from Alabama A&M University and Elizabeth Parmelee of Metropolitan State University of Denver (CO) with Standout Administrator Awards. Two partner organizations the National Association of Basketball Coaches and North Carolina Campus Compact were recognized with partnership awards.

Individual, champion, and best-in-class awardees will receive a physical award statue like the ones in this photo. Photo Credit: Human Being Productions

A second ceremony on Tuesday, November 9th celebrated ALL IN’s growing state campus voting challenges. Michigan Secretary of State Jocelyn Benson was recognized with ALL IN’s inaugural standout secretary of state award. Awards for highest voter registration and turnout were awarded to campuses in 17 state and city campus voting challenges. ALL IN partners with seven bipartisan secretaries of state to help their offices support and recognize nonpartisan student voting efforts including Colorado, Maine, Michigan, New Jersey, Pennsylvania, Rhode Island, and Washington as well as nonprofit organizations in states and cities including America’s Urban Campus, Campus Compact, and You Can Vote. States have a powerful platform to convene, support, and recognize campuses. The ALL IN Campus Democracy Challenge looks forward to partnering with even more states to help implement state campus voting challenges.

The work of campuses in 11 collegiate athletic conferences was celebrated in a final ceremony on Wednesday, November 10. Inaugural awards for standout coach were presented to Gary Stewart of Stevenson University (MD) and Kiambra Griffin of Manhattan College (NY). Craig Robisnon, executive director of the National Association of Basketball Coaches keynoted the event and more than 100 campuses across the ACC, America East, Big Sky, Big 12, C-USA, Ivy League, NESCAC, MIAC, OAC, Pac-12, and SoCon athletic conferences were recognized with awards and recognition. The Big Ten Voting Challenge will present their awards in January 2022.

The full list of award recipients, including Best In Class award winners is here; a full list of campuses receiving seals of recognition can be found here.

The ALL IN Campus Democracy Challenge congratulates all of our campuses for being all in for our democracy! To learn more about ALL IN or how your campus can get involved, visit allinchallenge.org.