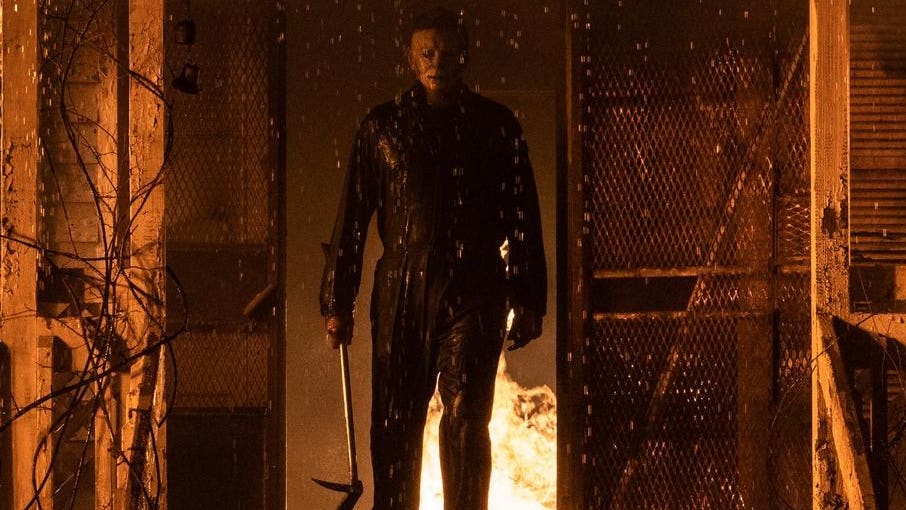 Universal and Peacock have announced that David Gordon-Green’s Halloween Kills, which debuted yesterday in Venice to mixed-negative reviews, will get a day-and-date theatrical/streaming debut. Like DreamWorks Animation’s The Boss Baby: Family Business (which debuted in theaters on July 2 and was on Peacock “for free” for the first 60 days of its domestic theatrical run), Blumhouse and Miramax’s Halloween threequel (written by Scott Teems, Danny McBride and David Gordon Green) will be available in theaters and on Peacock come October 15.

The again stars Jamie Lee Curtis as Laurie Strode, this time in a “40-years-later” continuation of John Carpenter and Debra Hill’s 1978 original. Halloween, which earned a ridiculous $159 million domestic (from a $77 million debut weekend) and $256 million worldwide take from a $10 million budget in October 2018, was a “none of the other sequels counted” installment. Likewise, Halloween H20 acted as a “20 years later” offering which ignored everything after Halloween (1978) and Halloween II (1981) and again Laurie against the boogieman.

So, I guess this is the second or third Halloween III, depending on how you count H20 and The Return of Michael Myers which was the fourth Halloween film but the third Michael Myers-centric installment. Fortunately, this is only as confusing as you want it to be. With the obvious caveat that none of this would have happened in a non-Covid timeline, there is reason to expect a severe downturn for this middle chapter of the Blumhouse-produced trilogy. But it wasn’t so sharp (in non-Covid times) to cause concern.

Halloween earned $47 million domestic while Halloween II earned $25 million (-47%). Rob Zombie’s Halloween (the Labor Day champ until just days ago) earned $80 million worldwide in 2007 while his Halloween II earned $39 million (-51%) in 2009. H20 sold itself as the first chapter in a new era of Halloween (it’s no secret that the franchise was about to go direct-to-video after The Curse of Michael Myers) to the tune of $55 million in 1998. But the mostly Laurie-free Halloween Resurrection earned just $30 million domestic (-55%) in 2002.

Heck, if you count The Return of Michael Myers (which brought back the Shape along with Donald Pleasance’s Dr. Loomis and opened ten years after the first Halloween) as a “folks were curious the first time” reset too, then note that Halloween IV earned $17.7 million in 1988 while Halloween V: The Revenge of Michael Myers earned a franchise-low (sans inflation) $11.5 million (-35%) in 1989. So if we run the math, then we’re looking at, at best, a 65% retention (which is normal-to-good for most franchise) and a $101 million domestic and $166 million worldwide.

That was likely a best-case-scenario sans Covid. We’re probably looking at, especially with a mediocre reviews (many of which seemingly emphasize how little Laurie vs. Michael screen time we get), something closer to $80 million domestic and $128 million worldwide, which again would be just fine for a $15-$25 million sequel to a breakout horror smash. When your $10 million movie tops $255 million worldwide, your sequel can make a lot less and still make a lot of money.

Does this move, which has been in the works for awhile, mean that Universal knows that they’re probably looking at grosses closer to Old ($87 million worldwide on an $18 million budget) or The Forever Purge ($76 million/$25 million)? Maybe, maybe not. Recent history suggests that the folks who want to see the film in theaters will still do so.

That’s especially true now that Venom: Let There Be Carnage has moved up to October 1. In a skewed irony, that Peacock isn’t a hugely “well-known” streaming platform (think Netflix or even Disney+) means that there’s likely to be less of a theatrical cost. Paw Patrol is still pulling in the over/under $35 million it otherwise would have even with the Paramount+ availability, and The Boss Baby: Family Business still crossed $100 million worldwide.

That’s not to say that theatrical windows don’t matter. M. Night Shyamalan’s leggy Old ($47 million from a $16.5 million debut) has benefited from an old-school exclusivity window. And while The Forever Purge got the quick-to-PVOD treatment, it still legged out to $44.4 million domestic or a franchise-best multiplier of 3.55 x its $12.5 million debut. F9 got a month of exclusivity and earned $173 million on a $70 million debut, the leggiest “not a spin-off” Fast Saga flick since 2 Fast 2 Furious in 2003.

This is partially about beefing up Peacock (October 2020 was their biggest month for horror/fantasy movies) and selling the platform as a destination spot for your Halloween season scary movie needs (#justice4Shudder). If I may speculate, it’s partially an experiment in terms of the upcoming Exorcist movie which will debut theatrically in October 2023, as that $400 million (!!) trilogy is seen as a theatrical/Peacock group project of sorts. If folks want to see Halloween Kills, they’ll either see it in theaters or check it out on Peacock. Oh, and this has no bearing on any hybrid plans for Halloween Ends next October. So, do try to get vaccinated.