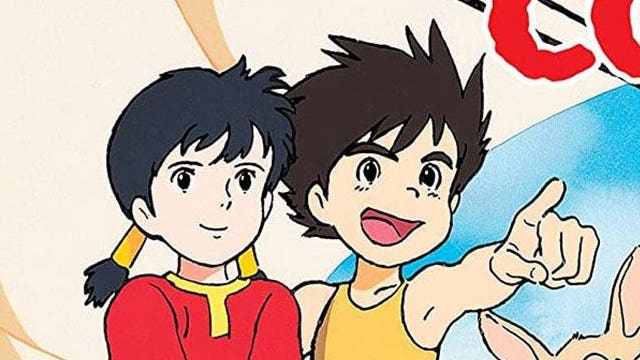 Of all the anime series that we assumed would never see an English release, Future Boy Conan was the main candidate. Yet, here we are and while we are several decades late to the party, it’s certainly been worth the wait.

Originally aired on Japanese television back in 1978, it told of events of the then future of 2008, where humanity has created ultra-magnetic weapons that shatter the tectonic plates and tilt the Earth on its axis.

Killing billions in an instant, whole continents sink beneath the sea and humanity nearly becomes extinct.

The series itself then picks up twenty years later, where survivors live on an island thinking they are all that is left of humanity. With these being an old gentleman simply called Grandpa and the uniquely tough and upbeat Conan.

It’s not long after the series starts that we are introduced to a girl called Lana washed up on a beach. Quickly followed the forces of a mysterious land called Industria. That will literally hunt her down to the ends of the Earth, or what’s left of it, to secure the secrets of solar power from her grandfather, Dr. Briac Lao..

So begins Conan’s adventure, as he tries to aid and protect Lana from the power-hungry minions of Industria and making a bunch of wonderful friends along the way.

What’s unique about Future Boy Conan as a series is just how well paced it is in terms of the story. Yes, it is technically a 26 episode series but the way the story is told makes it more of a 13 hour movie. There really is very little fat to speak of when it comes to the plot and clearly shows why Hayao Miyazaki would go on to be such a narrative powerhouse in anime.

This is one of the key points of this series; it marked the first time that Hayao Miyazaki sat in the director’s chair for an anime, and that alone from a point of cultural history makes it rather noteworthy.

Miyazaki wasn’t the only major creative talent on the series either, as Yoshiyuki Tomino worked on it as a storyboard artist, though more of that a bit later.

Another major aspect to this series is that despite it being released back in 1978, the animation is surprisingly solid throughout, something this Blu-ray release only helps to emphasize.

When it comes to how many other creative works and artists Future Boy Conan has inspired over the years, the list is almost endless. From Yoshiyuki Tomino and his work on Xabungle, which according to Hiroyuki Imaishi was Tomino’s attempt to capture the magic of Conan despite him feeling he failed (hence why it is called “the bungle”). In turn, Imashi’s love of Xabungle was one of the main creative driving forces behind Gurren Lagann as well. So all of that can be traced back to Conan.

You also have other artists and directors such as Shinji Aramaki and Kenji Kamiyama citing Conan as a formative work. Not to mention Yoshikazu Yasuhiko’s excellent Giant Gorg, which owes a lot to Conan in terms of its structure and pacing.

More recently Conan was referenced in Keep Your Hands Off Eizouken!, though in somewhat roundabout way due to licensing and rights issues.

Which brings me on to why Conan took more than four decades to get an English release, and that’s down to the book it was based on.

Specifically, Future Boy Conan was meant to be an adaptation of The Incredible Tide by Alexander Key. However, that book is rather pessimistic in tone and Miyazaki changed a great deal of the story and approach when he made Conan, to the extent that it is an entirely new and separate work.

Understandably, Alexander Key was not best pleased with what Miyazaki had done to his book and had his estate block the release of the anime in English for decades.

Personally, I am just grateful that whatever stars and planets aligned to make this happen finally did so. Future Boy Conan is a brilliant work in its own right and one I have loved for as longs as I have watched anime. So to have it available in an official capacity and on Blu-ray no less is something I genuinely cannot enthuse about enough.

Apart from the excellent audio and video quality on this release, we also have an all-new English dub available, and the set comes with a nice little artbook with design sketches from the series.

That said, the release is a pretty barebones one but considering how long we have all waited to finally get Future Boy Conan, this is an entirely moot point.

Overall, Future Boy Conan is one of the best anime ever made. Not only on its own merits as a great and hugely fun series that demands to be binged watched, but also its ongoing cultural legacy and how it has helped shaped anime storytelling over the fast four decades. While Miyazaki may be lauded for his films, Future Boy Conan is easily his best anime work by far.

Future Boy Conan is released on Blu-ray on November 16 and can be pre-ordered from both the GKIDS and Shout! Factory online store.

Disclosure: Shout! Factory sent me a copy of this Blu-ray set for the purposes of this review.