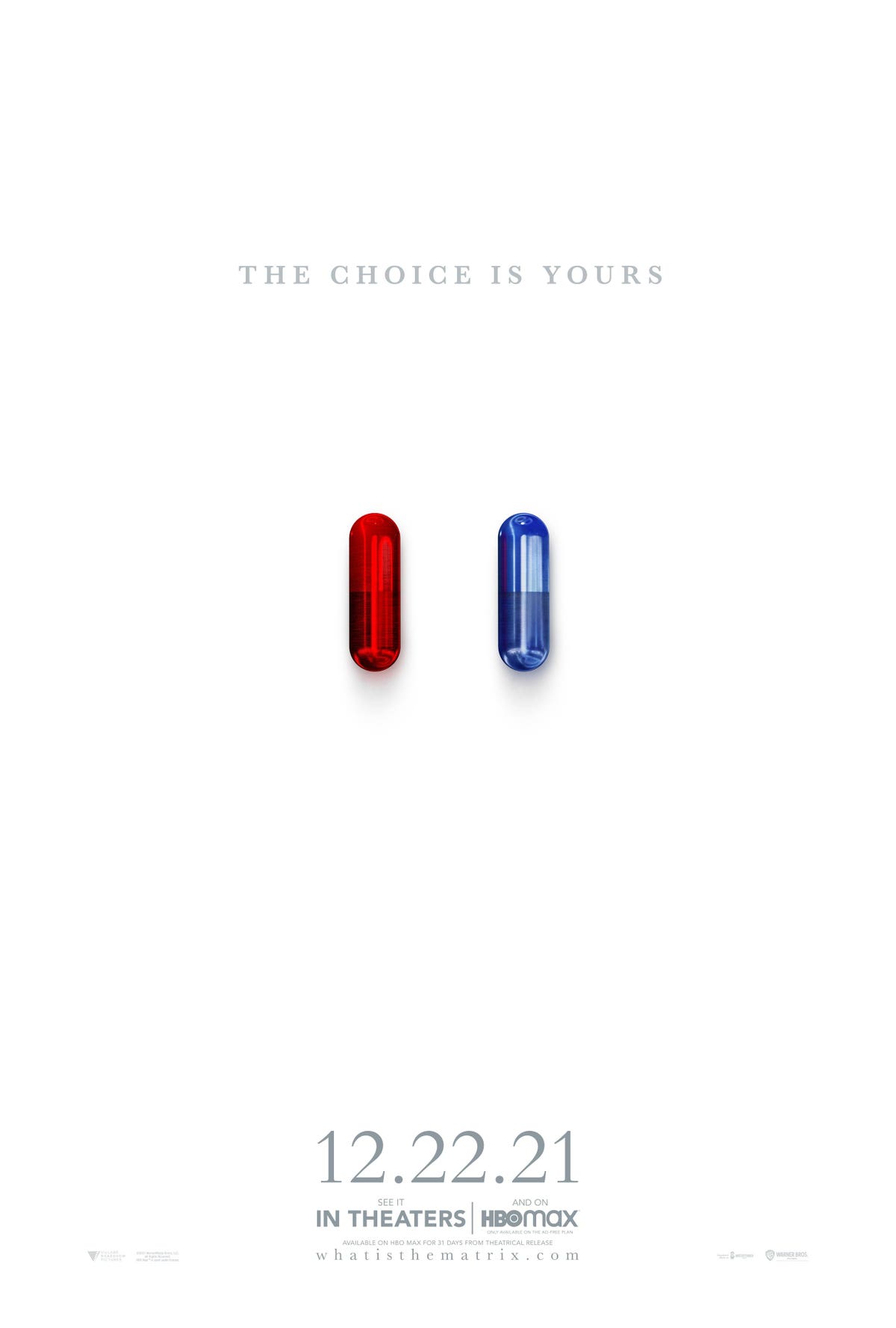 This first poster for Lana Wachowski’s The Matrix: Resurrections is a fine example of minimalist artwork. It banks on franchise iconography over star power. The Keanu Reeves/Carrie Anne-Moss/Yahya Abdul-Mateen II-starring film is listed as opening on 12-22-21 (a palindrome!). The text (“The Choice Is Yours”) and image placement have some pretty overt implications.

I’m guessing it’s not a coincidence that the red pill (which showed Neo the truth about the real world) is implicitly positioned as “see it in theaters.” In contrast, the blue pill (which allowed Thomas Anderson to forget and ignore that his world was a computer simulation) is positioned as “also on HBO Max.” The choice is clear: multiplexes are “the real world,” while streaming is “a comforting false illusion.”

This isn’t about the moral and philosophical debates about the current “streaming versus theaters amid a pandemic” conversation. I’m hoping that even the Delta variant will have subsided by Christmas. However, it would undoubtedly behoove Warner Bros., Village Roadshow and friends if more folks showed up to see The Matrix: Resurrections in theaters instead of watching it at home on HBO Max.

This is an expensive, big-scale, IMAX-friendly action fantasy. It was green-lit and produced as an “only in theaters” release with the then-standard global theatrical roll-out and 90-day window. Moreover, we’ve thus far seen mixed (at best) evidence that folks who otherwise would have gone to a cinema are opting for HBO Max *instead of* theaters.

Godzilla Vs. Kong earned best-case-scenario box office ($100 million domestic and $460 million worldwide on a $165 million budget). It also notched a strong-for-HBO Max 5.1 million households over the first 17 days. Yet In the Heights, Reminiscence, Those Who Wish Me Dead and The Little Things didn’t break SVOD streaming viewership records even as they died badly in theaters.

Quality notwithstanding, most of the films that bombed in theaters (The Suicide Squad and Space Jam: A New Legacy both cost way too much even for pre-Covid times) didn’t exactly earn sky-high initial HBO Max viewings either. Mortal Kombat (still the HBO Max champ with 5.5 million households in 17 days) may be the exception. Still, a solid $23 million debut but a frontloaded $42 million finish and a weak $83 million worldwide cume on a $55 million budget do not a sequel make in normal circumstances.

The Conjuring 3 (while still a hit with $197 million on a $39 million budget) took a slight domestic hit ($64 million domestic) even while “only” nabbing under two million households on opening weekend. And Judas and the Last Messiah still became the A-level Oscar contender it was initially positioned as, with Daniel Kaluuya winning Best Supporting Actor for the Best Picture-nominated WB release.

That’s not to say the “in theaters and on HBO Max” plan is all doom-n-gloom. AT&T swore at the time that it was just a 2021 strategy as the pandemic continued to rage. HBO Max provided a cushion of for less-predictable theatrical results. WB’s steady supply of high-end theatrical product was a factor in theaters’ ability to weather the storm, while HBO Max’s success or failure wasn’t entirely resting on the hybrid release of theatrical movies.

I’d argue the overperformances on opening weekend (relatively speaking) of Tom & Jerry, Godzilla Vs. Kong and Mortal Kombat gave other studios the confidence actually to schedule a summer movie season. Moreover, quality notwithstanding, most of WB’s 2021 slate were theatrical coin tosses or likely bombs. Wonder Woman 1984 (released last Christmas) was the only surefire smash sacrificed to the streaming gods.

Even pre-Covid, folks don’t show up for movies like Those Who Want Me Dead or Reminiscence anymore. They love to talk about wanting more original, diverse, star-driven, non-franchise and/or adult-skewing theatrical offerings. They are then nowhere to be found when the likes of The Goldfinch, The Good Liar, The Way Back, The Little Things, The Kitchen, Richard Jewell, Blinded By the Light and/or In the Heights open theatrically.

We’ll see if The Many Saints of Newark or Clint Eastwood’s Cry Macho buck the trend. I’ll be optimistic for Will Smith’s King Richard in November. However, of WB’s “questionable” biggies (Dune, Godzilla Vs. Kong, The Suicide Squad, Space Jam: A New Legacy), I’d argue Matrix 4 had the best chance of really breaking out pre-Covid.

The wonky, audience-challenging components of the franchise may well play better as a franchise that looks and feels different from your stereotypical Marvel/DC spectacular. WB had reason to hope that Matrix 4 would play closer to (relatively speaking) The Force Awakens and Jurassic World than Terminator: Dark Fate and Independence Day: Resurgence. I expect the marketing to hammer home the notion, hopefully in a non-confrontational way, that seeing Matrix: Resurrections in theaters is the “real” way to see it.