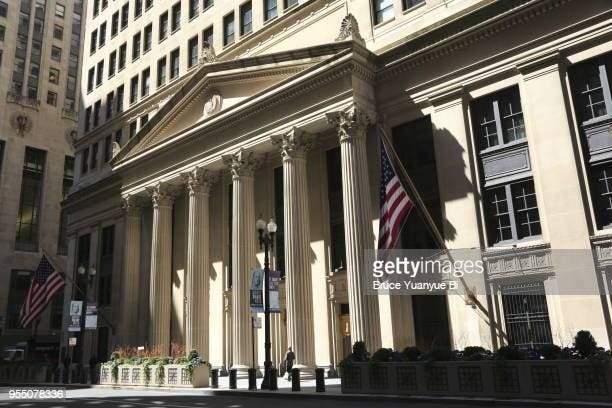 The ‘re-upping,’ yesterday, of my proposal made during the last crisis – that the Fed short-sell commodities to fine-tune its monetary policy innovations – seems to have generated sufficient interest, favorable and unfavorable, as to merit a follow-up. This follow-up finds further warrant, I think, in a thus far surprisingly under-reported development – namely, that the Chicago Fed (FRBC) is developing a trading capacity near the Chicago Mercantile Exchange (CME) analogous to the New York Fed’s (FRBNY’s) trading desk, described in my previous column, near the New York Stock Exchange (NYSE).

Let’s start with the latter and why it’s important. The New York Fed’s trading desk in Lower Manhattan is where the Fed conducts open market operations in Treasury securities with Wall Street dealer banks. These operations, as noted yesterday, are means by which the Fed acts to influence a price that we all understand to be systemically important and hence better publicly acted upon than left to the actions of private sector speculators – namely the prevailing money rental, a.k.a. ‘interest,’ rate.

The beauty of open market operations in Treasurys is that the Fed can react quickly and nimbly to changing market developments, which the Fed carefully analyses each day, to prevent broadly destabilizing volatility in this all-important price – the price of borrowing. Borrowing prices are systemically significant, as noted yesterday, for multiple reasons, among them that they enter pervasively into the construction of nearly all other prices economy-wide. The dealer banks with which the Fed deals in Treasurys, most located as they are on or near Wall Street, are best dealt with by the New York Fed located two blocks north.

Now as noted both yesterday and during the last crisis over a decade ago, money rental rates are not the only systemically important prices. Labor rental rates – a.k.a. ‘wages’ and ‘salaries’ – are at least as pervasively consequential in any capitalist economy, and accordingly warrant what I have called ‘open labor market operations’ on all fours with Treasury market operations. And so, I’ve long argued, are the prices of those fuels and foodstuffs whose prices are both (a) excluded from measures of what is ironically labeled ‘core’ inflation, and (b) of crucial import to working people, in relation to whose budgets these prices constitute major shares.

The reason for singling out fuel, food, and other commodity prices right now is essentially the same as it was over a decade ago. Fed monetary easing, which was crucial to supporting demand and averting disaster both after 2008 and during 2020, works an unfortunate side effect when it isn’t fine-tuned: blunt instrument that it is, the easy money with which it floods markets enables hedge funds and other commodity speculators to gamble cheaply on price movements in these markets, thereby bringing higher highs and lower lows – volatility. That’s something that working people can ill afford, and it is clearly the principal, if not the sole, sense in which inflation has grown somewhat worrisome in recent months.

Now, as I’ve been arguing since the pandemic began, the principal way to reverse our current inflation is to ramp-up supply-support measures that complement all the demand-support measures we’ve had to take since early 2020. More money requires more goods if it isn’t to flow simply into higher prices. But our moves to restore and re-shore mass production to America will take some time, even if less than some naysayers claim. And in the meanwhile it will be unjust and unwise to make working people wait.

Hence the Fed should ‘mend,’ not end, its pandemic monetary easing. It should fine-tune it, by counteracting the price rises that easing has brought to commodities markets by inadvertently subsidizing hedge funds and other speculators.

How might that work? Well, this is where the Fed’s developing Chicago capacities become interesting. The primary ways one goes long or goes short on commodities markets today is through the derivatives markets. And the Chicago ‘Merc,’ or CME, is to derivative contracts more or less what the New York Stock Exchange is to corporate securities and Wall Streets dealer banks are to Treasury securities. In short, it’s the best place to short, or to go long in, commodities. In this light the fact that the New York Fed Markets Group is effectively enabling itself to conduct open market operations in Chicago as it does in New York is intriguing indeed.

Yet more intriguing are some of the new job descriptions now posted at the Chicago Fed’s website, where the FRBNY and FRBC are jointly advertising multiple openings.

Consider, for example, the new Contact Engagement Policy Advisor position, which New York and Chicago jointly envisage as ‘[p]roactively identify[ing], build[ing], and maintain[ing] relationships with a diverse set of senior external market participants, including to develop contacts in new areas or markets where additional relationships are needed’ (emphasis supplied). The most obvious reading of that description, I suggest, is as enabling the formation of new dealer-bank-style relations that can be as useful to Fed commodity trading off Wacker Drive as current such relations in New York are to Fed Treasurys trading off Wall Street.

Ditto the advertised expectation that holders of the new position will ‘represent the Bank in external interactions with senior market participants, including during periods of financial market volatility and stress.’ It is of course perfectly possible that the Fed here envisages little more than information-sharing and ‘jawboning,’ but the fact that multiple New York Fed trading personnel are now working in Chicago suggests that more is at least provisionally or contingently contemplated.

I do not wish to attribute even hopes, let alone plans, that I cannot definitively attest are at work here. But I do think that what I’m conjecturing here is worth hoping – and pushing – for. As noted earlier, Fed easing has been necessary, hence worthy of celebration and continuance. But what has been necessary has also been blunt – there have been harmful side-effects, as often happens with even the best medicines. It is accordingly only rational, not to say imperative, to mitigate harmful side effects when that’s possible.

A new FRBC trading capacity will make Fed commodity-shorting and –longing not only possible, but easy – as easy as dealing in Treasurys. And where you are yourself the source of volatility, you should yourself, when it’s as easy as Treasury-dealing, be the source of the requisite stabilization. That’s what Fed commodity-dealing will be.

Let me now move to a couple of more general observations that I have made elsewhere, which will further contextualize what I’ve been openly hoping for here. Then I will close.

The Federal Reserve System as originally established in 1913 was designed to concern itself as much with money allocation – the direction of flows – as with money modulation – the magnitudes of those flows. That was because the misallocation of endogenous bank-issued credit-money – in particular, toward speculative as distinguished from productive uses – made good modulation impossible in decentralized markets vulnerable to recursive collective action predicaments in which individually rational decisions can aggregate into collectively irrational outcomes.

The way that the Fed handled allocation in its first 20 years was as principled as it was ingenious. It assigned to its District Banks – not just New York and Chicago, but all twelve of them – the task of broadly distinguishing between productive and merely speculative projects, then discounting commercial paper associated with private sector bank lending of the first kind.

This left room for immense discretion on the part of private sector lenders – the Fed wasn’t ‘centrally planning’ or ‘picking winners and losers’ in any micro sense. It was simply saying that the monetized full faith and credit of the United States wouldn’t subsidize gamblers, but would instead flow to actual producers – those who ‘developed’ our country and generated new material wealth sufficient to absorb the new money used to produce it.

The story of how we lost this particular Fed is an important and routinely mischaracterized one that I have repeatedly told elsewhere. What matters here is how to recover it, in a form well adapted to 21st century conditions.

Part of the answer to that is to ‘Spread the Fed,’ as I call it – restoring the productive secondary lending role to the regional Fed District Banks that they once had. Another part – severable from the Fed-(re)spreading plan but also complementing it – is for the Fed to manage a ‘Price Stabilization Fund’ that I’ve pushed for some time as ‘the People’s Portfolio’ in other, including book-length, work. And part of it is for some instrumentality to engage in the open labor market operations referenced above.

But at the moment the most urgently necessary part of the allocation-rediscovery and –recovery task before the Fed is the commodity price stabilization task. Fuel and food price volatility is both the most unjust and the most undermining side effect of otherwise necessary and indeed salutary Fed monetary easing. And precisely because it is a side effect – that is, is itself Fed-wrought – and is easily Fed-remedied, the Fed must begin remedying it now.

Simply raising rates and reversing its easing is too blunt an instrument – it is too apt to kill the very patient whose survival and flourishing we are trying to revive and ensure. The cure for overbroad easing isn’t overbroad retrenchment. It is non-overbroad easing – it is monetary fine-tuning. That is a form of allocation, but so is near every central bank action, forthrightly acknowledged or otherwise.

If we must allocate, then, let’s do it productively as we once did. Allocate to produce, not to speculate. And begin by shorting commodity futures – from the new Chicago Fed trading desk.