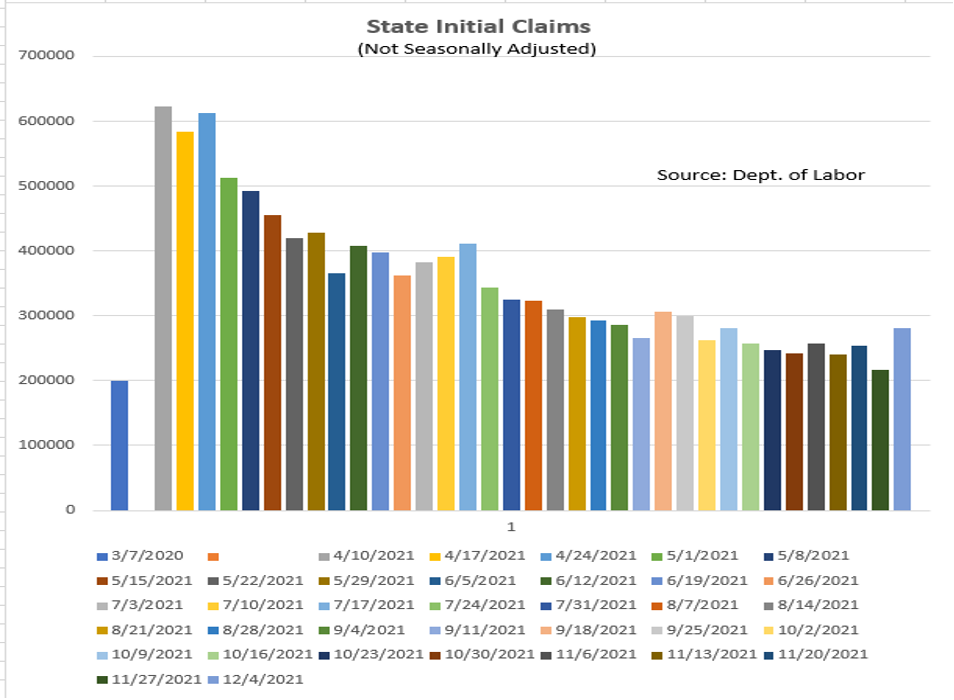 The following aspects weren’t discussed much in the media:

·     Services inflation (the U.S. is mainly a service economy) +3.4% Y/Y (+0.4% M/M). While higher than desired, not all that terrible. Rising prices are mainly due to the rising prices of consumer goods. The good news here is that officials at the port of Long Beach put out a statement saying that they expect to make significant progress in reducing the port’s backlog over the next six months.

·     Shelter costs (rent and the imputed “Owners’ Equivalent Rent” (OER) calculation) rose 3.8% Y/Y and will likely continue to rise over the next few months. But there were scarcely any remarks about the record high multi-family housing starts over the past few months. Rents will likely stabilize or even fall when these come on the market, likely in the spring (a capitalist concept called “competition”).

·     The November CPI number did not accelerate from that of October. This could be a sign that inflation has peaked.  The following is a sample of the fall from recent peaks of some important commodity prices:

It takes a few months for such trends to impact consumer prices, so sometime in Q1/22 we ought to see a trend toward lower M/M inflation.

·     For the past few months, the University of Michigan’s Consumer Sentiment Survey has indicated that consumer intentions to purchase autos and homes are at 50-year lows. Lo and behold, November’s auto sales were at an annual rate of 12.9 million units. 16-17 million is “normal.” That’s the sixth decline in the past seven months and is -19% lower on a Y/Y basis (yes, lower than November 2020 when the economy just began to unlock!).

·     Redbook’s same store sales comparison for major retailers was -5.6% M/M in November (could it be that everyone is shopping online?). As we have stated in previous blogs, we believe that the “shortages” narrative has pulled Retail Sales forward and that December Retail Sales will disappoint.

As indicated at the top, on Friday (December 10) markets shrugged off the CPI report and moved higher, while bond yields fell slightly.  Apparently, market professionals see the trends outlined above.

On the margin, labor markets have also begun to show signs of easing.

·     In the most recent JOLTS (Job Openings and Labor Turnover Survey), job openings continued at record levels, but actual “hirings” were down. (Part of the explanation here is the all-encompassing definition of an “opening” used in the survey.)

·     The financial media headlines the “record low” level of Initial Jobless Claims (ICs) we have had in two of the past three weekly IC reports (weeks of November 20 and December 4). As shown in the table, these were 184K in the latest week and 194K two weeks earlier. Unfortunately, these were Seasonally Adjusted (SA) numbers. The Unadjusted (NSA) numbers tell a different story (see table and chart at the top), as they rose in both of those weeks (this was not widely reported) and are still significantly above their pre-pandemic “norm.”

One really has to question how a seasonal adjustment can reduce the unadjusted number by 34% (97K) in the case of the December 4th data, and similar for that of November 20. In past blogs, we have discussed the dangers of relying on SA data – suffice it here to say that pandemic impacts aren’t seasonal.

·     Our observations regarding ICs are corroborated by the huge jump (+398K or by more than 25%) in Continuing Unemployment Claims (CCs), (i.e., those collecting benefits for more than one week) for the week of November 27. They rose from 1.561 million to 1.959 million. The Department of Labor (DOL) puts out a final reading for CCs, by state, with a two-week lag (latest is November 20) with an “Advance” (estimated) reading with a one-week lag (November 27). The “norm” is for the “Advance” data to be lower than the “final” data of the prior week because new claimants often have back-week pay claims. So, a large (25%) surge in the “Advance” data is significant and something to watch closely. Because of the reporting process, when the data is finalized for the November 27 week (to be reported on Thursday, December 15), it is almost certain to be higher than the outsized number already in the “Advance” estimate.

·     The huge jump in CCs described above gives us confidence that the +64K weekly jump in the NSA ICs shown in the table above (217K to 281K) is a much more accurate picture of the current labor market than is the SA 184K number.

For fifty years markets have paid lip service to Milton Friedman’s observation that “inflation is always and everywhere a monetary phenomenon.” The table shows the growth of M2 (money) over four 13-week rolling intervals. The accompanying chart is also instructive. Based on historical observations that it takes about nine months for monetary policy to impact the economy, the righthand side of the chart shows the recent tight relationship between the growth in M2 (lagged nine months) and the CPI. Given the rapid deceleration in M2 since September (see table and shown on chart with a 9-month lag), if the relationship continues to hold, the growth in the CPI will decelerate going forward.

The next scheduled Fed meeting is Tuesday/Wednesday (December 13-14). They find themselves at a critical juncture, and a policy misstep could have major financial impacts.

Recently, Fed Chair Powell has “pivoted” again, adopting a more “hawkish” stance on inflation. Perhaps this was due to the unrelenting financial market pressure, or perhaps for political reasons (to let the public know the Fed will “fight” inflation).  The data we have provided in this blog leads us to believe that neither the economy nor the labor markets are as strong as the financial media “narratives” would have us believe.

Financial markets react to changes in Fed policy. So, if the “inflation” narrative causes the Fed to tighten, there will likely be significant reactions in both the equity and fixed income markets (on the value of the dollar, too, relative to other currencies). In the current setting, the reaction could be magnified because record amounts of leverage underpin all asset classes. An unwinding of such leverage will magnify market movements.

Here is the danger: if the economy turns out to be weaker than anticipated (disappointing December Retail Sales, a weaker labor market, falling demand for big ticket items), premature Fed tightening would be a major policy misstep and could send the economy into recession.

Today, the equity and real estate markets are at nose bleed levels:

A Fed policy mistake could have significant financial implications.

(Joshua Barone contributed to this blog.)