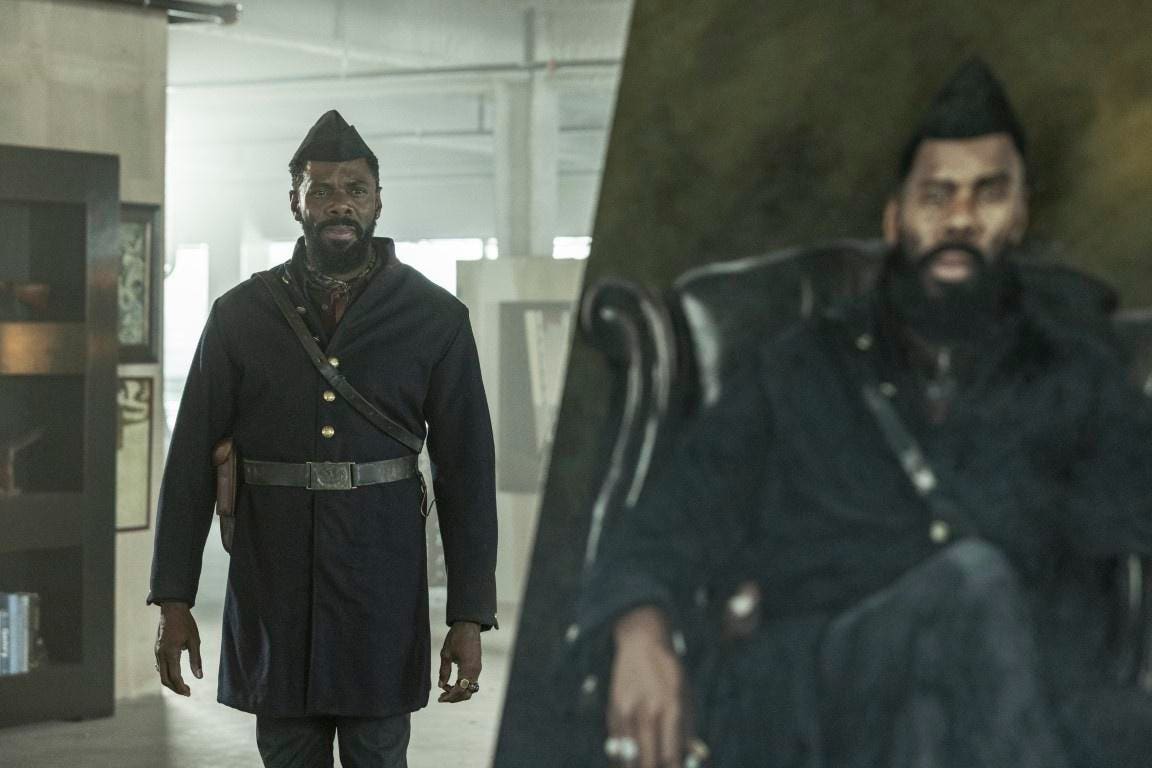 “I want you to draw me like one of your French girls.”

I’ll say this for Sunday night’s episode of Fear The Walking Dead: It wasn’t the worst episode of Season 7. So far this season seems to be trying to top itself each week with a worse and more ludicrous episode than the ones that came before. This broke that trend.

But this is damning with faint praise. While this wasn’t as bad as most of this season, it’s still Fear The Walking Dead and all that entails.

I’m honestly a little confused by this show sometimes. The opening moments of ‘The Portrait’ are filmed rather nicely. There’s classical music playing on the record player. Strand is sitting as one of the resident artists in his community paints his portrait. The actual technical stuff here is quite good especially compared to some of the episodes this season (with the fake radioactive yellow fog and the fake-looking sets and the terrible gas-mask-eye shots and so forth).

It’s the writing, once again, that’s so cringe-inducing. Beyond the sheer preposterousness of Strand having put this community together—in the aftermath of a nuclear strike—in just a few months, that includes oil paints, canvases, records and record players, and fiercely loyal soldiers and followers, it’s just another attempt at appearing clever. Not actual cleverness, mind you, just the veneer.

The episode opens with Strand monologuing to the artist painting him. He references Oscar Wilde, noting that Wilde said that any portrait painted with feeling is actually a portrait of the artist.

This is such a caricature of Victor Strand. Just like him hiring an assassin to kill an innocent family, it misses the entire point of who Strand is. This whole tinpot dictator nonsense is a bizarre direction for this character. Yes, he was always a bit on the melodramatic side. The way he talks has always been a little larger than life, but his motives were almost always understandable.

He’s self-serving, constantly at war between being a friend and ally to his companions, and looking out for number one. That’s been Strand’s struggle from the get-go. He helps people out, but not if it endangers him. He always has a back-up plan. And he’s willing to betray people to save his own skin.

What he isn’t is a guy who wears a military uniform and utters lines like the one up above. He isn’t a killer of children. He has never been interested in leading a community and he doesn’t inspire the kind of loyalty we see in his current community—a blind and dogmatic loyalty to a “leader” who has only been in charge of the tower community for at most a few months.

After his little portrait speech he takes calls from survivors looking to get into the tower, all of whom he turns away. Later we learn that these were fake calls from a group of the scavengers who lied about their true identity in order to gain entrance to the tower, apparently just because they wanted a safe place to stay or something.

Morgan also shows up with baby Mo (I guess everyone else stayed back at the submarine, because hanging out at ground zero makes lots of sense!) Mo is apparently sick and Morgan wants to have June look at her.

When Strand sees the portrait of himself he’s enraged. It looks just like him but “she doesn’t see me, nobody does” is his petulant reaction. Apparently he was expecting the artist to read his mind. He goes to the roof and throws the painting down to the zombies below. He also relents and allows Morgan to come in with the baby to see June.

Mo has an infection, June determines, but of course Strand’s tower is loaded with medical supplies because he is a magic leader with magic scouts who can magically find anything and everything you could possibly need despite all odds and a decade of zombie apocalypse.

But there’s a catch to Strand’s help. He wants Morgan to agree to helping him with a mission, the details of which he can’t relay because Morgan can’t be trusted yet. He won’t be allowed to take Mo back with him until the missions is completed. Morgan reluctantly agrees.

Just then, a zombie slams into the high-rise’s window, then another, this one smashing through the glass. It’s an ambush! Down below, the scavengers who tried to trick Strand earlier have somehow come into possession of a trebuchet. They’re using the siege warfare weapon to fling zombies into the building. They tell Strand that they have multiple zombies strapped with pieces from the nuclear warhead that they’ll start sending up if they’re not allowed to come in.

Help me out here, dear readers: Can you actually take pieces of a nuclear warhead, break them apart, and use them as explosives? I just can’t imagine this is how a nuclear warhead works. It’s not like a plastic explosive which you can mold by hand. It’s a highly technical weapon. I just don’t think this is how it works, though I admit to not knowing a great deal about nuclear armaments.

In any case, these attackers appear to be attacking just to be let in, which is weird. What happens when you’re let into a community that you just shot zombies at, killing and wounding the inhabitants there? This is a silly motivation and overall a deeply silly scene.

It’s made worse by the fact that sharp-shooter John Dorie Sr., instead of simply picking off the dudes firing the trebuchet, which he could easily manage, instead waits, allowing more zombies to be flung at them. The excuse is he could set off the bombs, but that would simply solve their problem by taking out the bad guys. How can Strand’s tower be so poorly defended?

But things continue down Stupid Lane from here. Morgan convinces Strand to let him radio Grace but we learn that Strand doesn’t let people use walkie-talkies in the tower so that they won’t broadcast their location. This from the guy who put a giant friggin’ lighthouse beacon on the roof. Okay, FTWD writers. Okay.

Once Morgan gets to the armory and radios Grace, we sort of skip past the ensuing battle, but it’s safe to say that she and the others showed up and shot the bad guys. But weren’t they worried that shooting at the bad guys would blow up half the parking lot? Why did Grace need to do that when John and Strand’s people could have picked them off from the roof? It takes a long time to load and fire a trebuchet. They would have won that gunfight in no time.

None of it makes sense.

But let’s keep driving down Stupid Lane through Bad Writing Town to behold perhaps the single worst thing about this very bad episode: Strand is poisoned and starts ranting and raving about a traitor. Eventually we do discover who the poisoner is: Morgan Jones himself.

I’m sorry, as much as I despise Morgan these days, he’s not a poisoner. He would never do something so sneaky and underhanded. Not because he won’t kill anymore—he’s abandoned that nonsense—but because when he kills it’s a last resort, almost always self-defense, and always face to face. He might kill Strand, but he’d do it honestly. Poison is so far outside of Morgan’s wheelhouse it’s not even funny. It’s even more of a betrayal of Morgan’s character than having that family killed was a betrayal of Strand’s character.

Of course, when Strand finds out he plans on tossing Morgan off the roof, which would be a great relief to us all. But what Strand didn’t count on was Morgan’s adamantium plot armor. It’s much too powerful for Strand to penetrate. Just when he’s about to have Morgan thrown overboard, Grace calls.

She tells Strand that some of the nuclear zombies made it into the horde below the building and she’s willing to go stop them before they explode, in exchange for Morgan’s life. Apparently she’ll be allowed in but he has to go out. I’m a little fuzzy on the details, but so is the script.

So Morgan is exiled and runs into Dwight and Sherry, TV’s worst power couple, and their posse of Scavengers. They take Morgan back to their absolutely crappy camp (seriously isn’t there another tower around somewhere they could use?) where they introduce him to their leader.

It’s Alicia, obviously. There was no doubt about it when they corrected Morgan by saying “she.” So yeah, seven episodes in and right at the end is the first time we get any Alycia Debnam-Carey all season long. I just don’t get it.

It appears Alicia has followed in Morgan’s footsteps, setting up a mostly terrible community that hangs out in tents where you can only take your mask off if “the wind is blowing in the right direction” (shoot me now) rather than stay in the bunker they were in previously, which appeared pretty safe when Strand visited it. Or, I dunno, anything other than a tent camp.

At this point some of the nuclear zombies show up because, hey, coincidence! Morgan tries to tell Alicia’s people not to shoot at these three whole zombies but they unload their automatic weapons in a panicked frenzy, because of course hardened veteran survivors of the apocalypse would act like this. And yeah, bullets to spare and all that. He should have thrown a walkie-talkie at them instead of trying to reason.

Of course, the zombies explode and a mist of blood and radiation descends on the camp. “Run away!” Morgan shrieks, and everyone does just that.

Back at the tower, Strand stares at his portrait. He’s had it pulled from the zombie horde and mounted on the wall. He likes it better now, torn and bloodied. I guess this is how he sees himself. How poetic.

“I didn’t know you liked children,” his lackey says.

“She’s gotta get used to her new father sometime,” Strand says, ominously. That’s actually pretty dark and twisted and, in some ways, more what I would expect from Victor. This should have been the final scene, however. The Alicia/Morgan meetup should have taken place first, then cut to Strand with the painting and end on him asking for the baby, with the close up of his face as he stares at the wreckage of the portrait.

All told, not the worst episode, but still pretty bad, filled with lots and lots of nonsensical character choices and weird pacing. Scattered thoughts:

P.S. Sorry for the late review. The holiday weekend and some personal issues set me way back on a lot of work stuff, because 2021 continues to enjoy kicking us all while we’re down. Fun times! Here’s my video review: