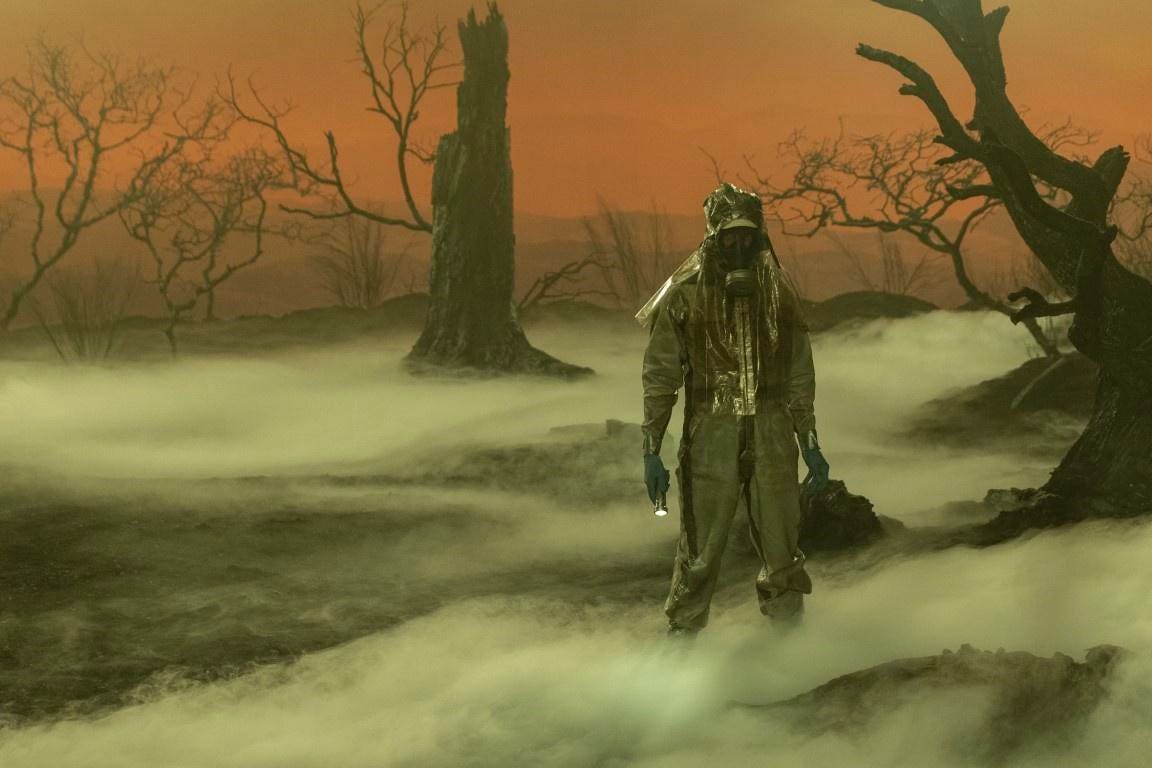 Fear The Walking Dead just keeps getting worse with every episode of Season 7. How the show’s creators are managing this feat is beyond me. Just when you think things couldn’t possibly be cheesier and more contrived, they prove you wrong.

Episode 1 wasn’t terrible. It had its moments. It was enormously uneven but at least Strand was entertaining in his way (minus the silly military uniform). I’m not saying it was a good episode by any means, but it wasn’t the worst.

Episode 2 was one of the worst episodes of this show’s entire run, featuring Morgan and Grace in a ludicrous series of unfortunate events as they tried unsuccessfully to leave the nuclear submarine they’d been holed up in since Teddy’s nuclear bombs dropped.

Episode 3 might be the worst yet—if that’s even possible. The whole thing centers on June and John Dorie Sr. who holed up in Teddy’s bunker just in the nick of time at the end of Season 6.

This pairing continues to bother me. What a contrived bit of plotting for June to run into her dead husband’s estranged father literally days after his death! Now they’re in a bunker together whiling away the days until they can reemerge.

Things are fine at first. June and John get along like gangbusters, playing house in the bunker, counting down the days until they can leave. Looks like they’re going to wait an entire year to let the radiation go down, but by the time things take a turn for the worse a few months have passed.

At least we finally have a sense of time—and can say with some certainty that Strand has been able to create a thriving community in under 100 days, while Morgan has hung out in the submarine building magical cars.

In any case, we discover that John Dorie Sr. is an alcoholic and a pretty bad one at that. He’s been drinking half a bottle of whiskey a day since the apocalypse began, though the real mystery is how he managed to get so much of the stuff. Since they’ve been bunked up together he must have somehow continued drinking this much without June noticing.

(What is with the current showrunners’ obsession with alcohol? It’s weird).

I say he must have continued drinking at this rate (which is not even that much for a true alcoholic) because once he’s off the sauce—after some shelves fall over, breaking all the bottles—he begins experiencing delirium tremens, a sever side effect some people experience when quitting alcohol cold turkey.

The problem here is logistical. Are we really ready to assume that Dorie Sr. had enough alcohol in the bunker to go three months at half a bottle a day? That’s 45 fifths of alcohol. If he’d been drinking less, he would have essentially weened himself from the stuff, and while he may have experienced side-effects, they wouldn’t have been this severe.

Whatever. We’ll roll with it.

Behind the fallen shelving unit, John and June find Teddy’s secret laboratory where he embalmed all those women he killed back when Dorie was working the case. This stirs up old memories (that weren’t already stirred up by running into Teddy). The combination of alcohol withdrawal and old memories causes John to start hallucinating about one of the women whose body he never found: Cindy Hawkins, whose name is the title of this episode.

So Dorie Sr. is hallucinating as he withdraws from booze and he starts doing stupid stuff. He hears the girl’s voice outside the bunker and goes out to investigate. The scene outside is grim. Radioactive fog everywhere. The yellowish light that isn’t day but isn’t night colors everything. Barren trees dot the landscape, and he finds the zombie corpses of Teddy and Dakota. Teddy is good and dead but Dakota is a zombie, so he puts her out of her misery. I suppose there’s something poetic about him killing the girl who killed his son.

The whole scene looks insanely fake. It looks like a set. It’s either a stylistic choice or it’s just plain bad, I can’t tell. We get lots of shots through the gas mask, shots of Dorie’s eyes in the gas mask, and then wider pans of the entire set itself. At one point, he sees Cindy but she turns into a zombie and, just in the nick of time, June appears and shoots it before it bites John.

Then they see those scavenger people in the radiation suits, all just standing there ominously. Again, this is both cheesy and silly because how did they show up just at this exact moment? It’s another ridiculous coincidence, perfect timing and perfect placement of a new and sinister threat, just like the bounty hunter’s brother showing up to go after Morgan in last week’s episode.

This entire show relies on gimmicks and ridiculous coincidences and wildly overpowered walkie-talkies.

The hallucinations continue and June and Dorie Sr. engage in some really poorly written dialogue as the bad guys outside try to break in. At one point Dorie restrains June so she can’t follow him back out, and he has some more hallucinations and a gun fight with the bad guys, one of whom gets past him into the bunker and points his gun at June and then conveniently waits until John can get back and shoot him before pulling the trigger.

John comes out of his haze (somehow) and frees June and then they find the body of Cindy Hawkins, buried in the wall. John fulfills his promise to her (probably long-dead) parents and all is well with the world.

Except that there’s a cave-in and they’re both knocked unconscious.

Later, they wake up in Strand’s tower because Strand and his people heard Dorie on the radio and came to rescue them. Strand offers Dorie a drink but he refuses, which is basically as far as this show ever comes to some kind of character growth/arc. Dorie is angry at Strand, however, saying something to the effect of “How could we live with you after what you did to Morgan!?” because of course Dorie also loves Morgan and hates Strand because that’s just how this show wants everyone to feel, despite Strand being a much better leader all around and Morgan leading everyone to, as Strand puts it, death.

But they decide to stay, convinced in part by the throng of zombies outside the tower (though Strand’s people seem to be able to come and go freely).

The scene cuts to Morgan outside the collapsed bunker. He, too, has heard their pleas on the radio and came to save them, in true Morgan fashion. He can’t escape the submarine but he can rush out to rescue people without a hitch. He’s trying to reach them on the walkie-talkie when suddenly Strand’s voice is on the other end. He tells Morgan that they’re not there and Morgan demands to know where they are. Tell me or else, basically, to which Strand replies:

“You’re such a bore. How ‘bout we do this every nights o you can put me to sleep.”

This almost makes up for the rest of the episode. It’s the best line this show has had in four seasons, because it’s god’s honest truth. Morgan is such a bore. He used to be a really interesting character but he’s been Goody Two Shoes Morgan for so long he’s almost unbearable. I think the writers want us to sympathize with Morgan and feel like Strand is the villain, but I’m Team Strand all the way. He’s already proved he’s better at all of this than Morgan.

He tells Morgan he wants to save the world and save people, but only those people he sees fit to save. This is, once again, meant to make Strand look bad, but is he wrong? The survivors under Rick and later Michonne had the same attitude. So did the Alexandrians before Rick’s group showed up. They didn’t just let anyone in—none of these communities ever have. They’ve all been selective and guarded. Strand is just doing the same.

Morgan tells him he should help people but if Strand hurts anyone he loves he’ll come for him.

“Bring it,” Strand says after a moment, smiling. Yep, Team Strand all the way.

I’m not sure what to say. Bad dialogue and fake-looking sets and silly hallucinations and loads of silly melodrama. Another episode focused on just a couple characters. The only thing that doesn’t make this show boring is just how over-the-top and gimmicky it is, you just kind of have to laugh at it as you watch, roll your eyes and let the stupidity flow over you.

I’ve been yelled at a bit for saying the same thing over and over again about this show and yeah, I know that’s a problem. But it’s because the same mistakes are being made over and over again. I’d really like to whistle a different tune. Fear The Walking Dead just can’t rise to the occasion.

Check out my video review of this episode below: