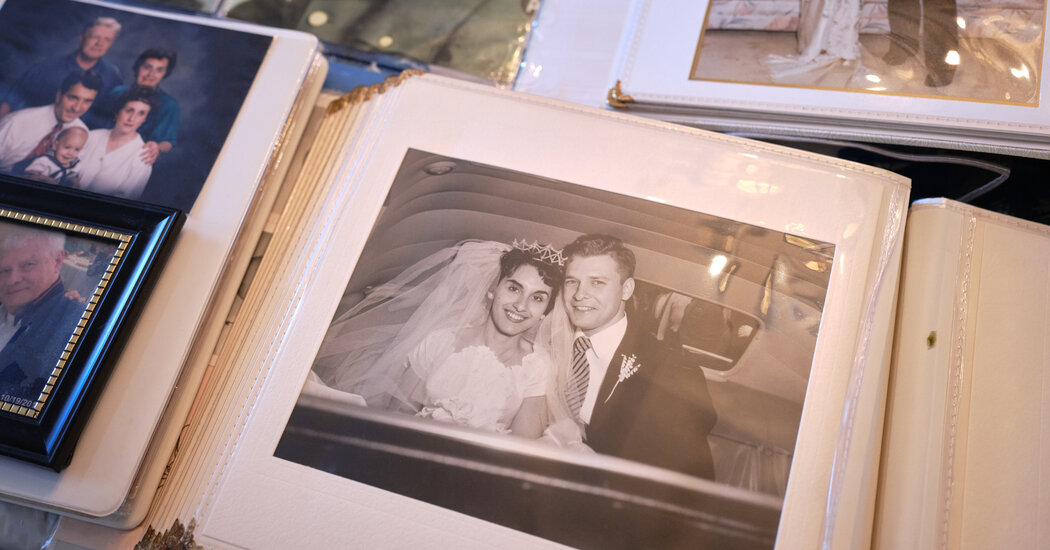 It was among the country’s deadliest coronavirus outbreaks: One in every three residents of a New Jersey nursing home for frail military veterans died as the virus raced unchecked through the state-run facility.

The 101 residents who died in the first eight months of the pandemic included both of Regina Costantino Discenza’s parents, who had been living at the complex, Menlo Park Veterans Memorial Home in Edison, N.J., for about two years when the virus began ravaging long-term care centers throughout the Northeast.

Three days after her father died, her mother tested positive for the virus.

“It was a horror show,” said Ms. Discenza, who inscribed the headstone at her parents’ grave with the words “2020 pandemic victims.”

Now, in a sober acknowledgment of failings, New Jersey has agreed to pay $53 million to families of 119 veterans who lived in the two facilities. The families had been preparing to file lawsuits that accused the state of gross negligence.

The average payout is expected to be roughly $445,000 as part of an out-of-court settlement that is believed to be the first of its kind nationwide.

The coronavirus pandemic has cut an especially lethal path through homes responsible for caring for older Americans.

As of July, at least 184,000 coronavirus deaths had been reported among residents and employees of long-term care facilities for older adults in the United States, according to a New York Times database.

Many states, including New Jersey, gave hospitals and nursing homes broad immunity from lawsuits as they faced the extraordinary demands of caring for patients at risk from a new virus, along with a shortage of basic safety equipment and fast-changing government directives.

Lawyers involved in the New Jersey agreement said they were not aware of any other multicase settlement involving deaths at a long-term care center in the United States.

“It is, so far as I know, the first settlement in the U.S. related to mass Covid death at any kind of medical facility,” said Francisco J. Rodriguez, a lawyer who represented 31 of the families.

But similar lawsuits are pending across the country against private and public nursing homes. Dozens of suits are linked to deaths at state-run veterans homes in Illinois and in Massachusetts, where 76 residents of the Holyoke Soldiers’ Home perished during the chaotic first months of the pandemic.

After details of the New Jersey settlement were released publicly, lawyers suing in federal court on behalf of 40 former residents of the veterans home in Massachusetts contacted a lawyer involved with the New Jersey complaints, suggesting that the deal — and the size of the award — had the potential to be used as a framework in future cases.

Officials with the administration of Gov. Philip D. Murphy noted that the settlement, reached two days before Christmas, will allow families “to move forward without years of protracted and uncertain litigation.”

In legal filings, the families had claimed that staff members were barred from wearing masks before April 2020 to avoid scaring residents. Sick and healthy residents were allowed to congregate. And staff members moved from room to room in the nursing homes without taking proper precautions to avoid transmitting the virus.

Families said the settlement award — part of which must be used to refund hospital costs paid by Medicare — offered a vital public acknowledgment of what their loved ones endured.

“It will never justify what happened to these poor people,” Ms. Discenza said. “But it’s making a point: These veterans were not properly cared for.”

Her father, Charles Costantino, was 86 and had spent his career working as a proof press operator for The Times. He declined rapidly after contracting the virus in April 2020 and died at a hospital near the Menlo Park home. Her mother, Madeline, suffered for six months.

The settlement comes as the Justice Department and the New Jersey attorney general’s office continue to pursue investigations into the death toll at the state-run veterans homes.

Deaths at long-term care centers across the state account for 30 percent of the more than 29,000 virus-related fatalities in New Jersey since the start of the pandemic.

Many people who fell ill at nursing homes died before being tested for the virus, leading to a potential undercount. In New York, former Gov. Andrew M. Cuomo faced an inquiry into whether he or his aides played a role in withholding the true count of nursing home deaths from the public for months. The Manhattan district attorney has closed that investigation without bringing charges, a lawyer for Mr. Cuomo who was briefed by prosecutors said this week.

The settlement covers only the 119 families that had pursued lawsuits, and includes three veterans who survived their initial bouts with Covid-19. Lawyers said the agreement did not preclude compensation for the families of other veterans who died after contracting Covid, even though the legal window for filing notice of a lawsuit has in most instances closed.

Paul M. da Costa, a lawyer who represented 72 families covered by the settlement, said the size of the payment reflected “a good amount of civil justice.”

In response to New Jersey’s high death rate, lawmakers adopted a raft of laws that increased minimum staffing levels at long-term care facilities and addressed infection control. Top administrators at the state-run veterans homes were replaced, and facility directors must now have clinical and long-term care experience, something that was not previously required.

Mr. Rodriguez said employees had testified in depositions that they were told not to wear masks after the nursing homes were closed to visitors in the middle of March 2020 to slow the spread of the virus. They were also barred from taking masks from the facility’s rationed supplies.

“We are going to start progressive discipline for mask insubordination,” a lawyer with the New Jersey Department of Military and Veterans Affairs wrote on March 27, 2020, according to an email Mr. Rodriguez obtained through a records request.

New Jersey began requiring nursing home employees to wear masks three days later, and state officials have said that no one was disciplined for wearing a mask before then.

The state hired an outside lawyer, John D. North, to handle the claims; the attorney general’s office declined to comment on the settlement.

Mitchell Haber’s father, Arnold Haber, had lived at the Paramus veterans home for three years before he contracted Covid and died. Mr. Haber said he and his mother were gratified by the settlement.

“At least there’s some justice,” he said. “Hopefully it just won’t happen again the way it happened.”

Nearly two years after his father’s death, the pandemic is still raging in New Jersey. Mr. Haber’s mother, who is 89, was released from the hospital this week, he said, after being treated for the virus.

On Thursday, 503 long-term care centers in the state were reporting outbreaks involving 5,034 people.

But for the 119 families, the settlement offered some solace, and finality.