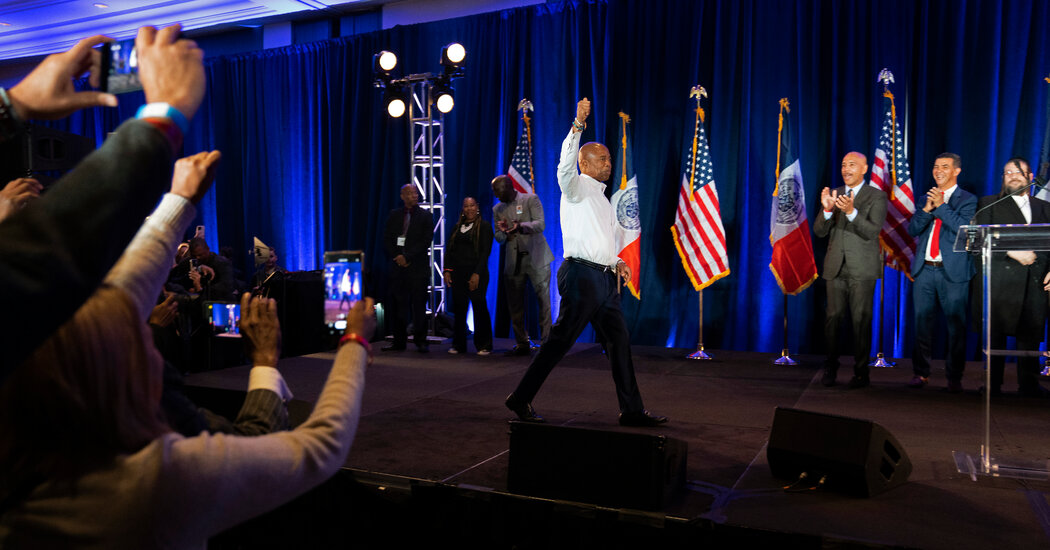 Eric Leroy Adams, a former New York City police captain whose attention-grabbing persona and keen focus on racial justice fueled a decades-long career in public life, was elected on Tuesday as the 110th mayor of New York and the second Black mayor in the city’s history.

Mr. Adams, who will take office on Jan. 1, faces a staggering set of challenges as the nation’s largest city grapples with the enduring consequences of the pandemic, including a precarious and unequal economic recovery and continuing concerns about crime and the quality of city life, all shaped by stark political divisions over how New York should move forward.

His victory signals the start of a more center-left Democratic leadership that, he has promised, will reflect the needs of the working- and middle-class voters of color who delivered him the party’s nomination and were vital to his general election coalition.

The results in New York unfolded as Democrats across the country monitored the emerging outcomes in two other closely watched races with concern: the contests for governor in Virginia and New Jersey, two states that President Biden won comfortably last year.

By the end of the night, Glenn Youngkin, the Republican, had taken the lead in Virginia, and the Democrat, the former Gov. Terry McAuliffe, was running well behind Mr. Biden’s 2020 margin in suburban and exurban communities across the state.

Mr. Youngkin ran a vigorous campaign in the Democratic-leaning state, seeking to capitalize on Mr. Biden’s weak poll numbers and parents’ anger with local school boards. Mr. McAuliffe, who was governor from 2014 to 2018, sought at every turn to tie Mr. Youngkin to former President Donald J. Trump in hopes of mobilizing Democrats and independent voters, but he said little about what he would do with another term.

In New Jersey, the Democratic incumbent, Philip D. Murphy, was in an unexpectedly tight race with the Republican challenger, Jack Ciattarelli. The two races for governor were seen by many party strategists as potentially ominous signs for next year’s midterm elections.

In New York City, even as Republicans appeared poised for the possibility of slight gains in the City Council, Democrats won the marquee contests easily. It seemed likely that many of the officials Mr. Adams must work with closely — prominent incoming City Council members, the public advocate and other Democrats who won on Tuesday — will be substantially to Mr. Adams’s left.

Mr. Adams, whose win over his Republican opponent, Curtis Sliwa, appeared to be resounding, will begin the job with significant political leverage.

He assembled a broad coalition, and was embraced by both Mayor Bill de Blasio, who sought to chart more of a left-wing course for New York, and by centrist leaders like Michael R. Bloomberg, Mr. de Blasio’s predecessor. Mr. Adams was the favored candidate of labor unions and wealthy donors. And he and Gov. Kathy Hochul, who showed up at his victory party, have made clear that they intend to have a more productive relationship than Mr. de Blasio had with Andrew M. Cuomo when he was governor.

Mr. Adams was buoyant in taking the stage at the New York Marriott in Brooklyn an hour after polls closed, entering to “The Champ Is Here,” a Jadakiss song he used during his campaign, before delivering his acceptance speech.

“We are so divided right now and we’re missing the beauty of our diversity,” Mr. Adams said, remarks that echoed the “gorgeous mosaic” that David N. Dinkins, New York’s first Black mayor, famously discussed. “Today we take off the intramural jersey and we put on one jersey: Team New York.”

Mr. Sliwa conceded Tuesday night, telling supporters that he was “pledging my support to the new mayor Eric Adams.” But Mr. Sliwa, a longtime tabloid fixture, also insisted, “You will have Curtis Sliwa to kick around.”

And in Buffalo, a fiercely contested matchup between India B. Walton, a democratic socialist and the Democratic nominee, and the incumbent mayor, Byron W. Brown, was getting national attention. A victor was not expected to be decided on election night, in part because Mr. Brown waged a write-in campaign. But about 60 percent of the ballots were marked for write-in, and Mr. Brown declared victory.

In New York City, the difficulties that Mr. Adams, 61, will encounter were apparent even as he celebrated his victory. “We are fighting Covid, crime and economic devastation all at once,” he said Tuesday night.

Indeed, in one of the world’s financial capitals, workers are barely trickling back to their Midtown offices. The tourism industry is suffering. Many of the city’s beloved restaurants and other businesses have closed for good. And even as Wall Street profits soar, the city’s unemployment rate stood at 9.8 percent in September, with job growth lagging behind the pace that some economists had predicted last spring.

Mr. Adams will also inherit a budget gap of about $5 billion that will require immediate action, said Andrew S. Rein, president of the nonpartisan Citizens Budget Commission. There will be contracts to negotiate with city workers and, eventually, the federal aid that helped pay for some city priorities will dwindle.

“Every decision has long-run implications,” Mr. Rein said. “If you start sooner, you can take care of it. When you’re in an emergency situation, it’s hard to make good decisions that are not painful.”

Mr. Adams has stressed that he plans to focus on rooting out inefficiency — and he has several proposals he wants to introduce — but the scope of the fiscal challenges will likely require making difficult choices.

He has made it clear that big business has a role to play in shepherding the city’s recovery, and there are indications that he may have a far warmer relationship with business leaders than Mr. de Blasio, who was elected on a fiery populist platform.

“He’s restored confidence that the city is a place where business can thrive,” said Kathryn S. Wylde, who leads the business-aligned Partnership for New York City. “He’s demonstrated that he has the courage to, basically, be politically incorrect when it comes to dealing with the demonization of wealth and business.”

There is no issue the next mayor has discussed more than public safety.

“We’re not going to just talk about safety,” Mr. Adams declared. “We’re going to have safety in our city.”

Mr. Adams grew up poor in Queens and Brooklyn and says he was once a victim of police brutality. He spent his early years in public life as a transit police officer and, later, a captain who pushed, sometimes provocatively, for changes from within the system. That experience cemented his credibility with many older voters of color, some of whom mistrust the police while also worrying about crime.

During the primary, amid a spike in gun violence and jarring attacks on the subway that fueled public fears about crime, Mr. Adams emerged as one of his party’s most unflinching advocates for the police maintaining a robust role in preserving public safety. He often clashed with those who sought to scale back law enforcement’s power in favor of promoting greater investments in mental health and other social services.

Mr. Adams, who has said he has no tolerance for abusive officers, supports the restoration of a reformed plainclothes anti-crime unit. He opposes the abuse of stop-and-frisk policing tactics but sees a role for the practice in some circumstances. And he has called for a more visible police presence on the subways.

The public safety issue remained on the minds of some voters on Tuesday.

“Hopefully, since he used to be in N.Y.P.D., he could get everything amicable again with the city and the N.Y.P.D., because it’s been very dangerous out here,” said Esmirna Flores, 38, as she prepared to vote for Mr. Adams in the Bronx.

Yet other voters said Mr. Adams’s emphasis on policing stoked misgivings. And he will certainly face resistance on the subject from some incoming City Council members.

Tiffany Cabán, a prominent incoming member who was endorsed by the Democratic Socialists of America, said that on many issues she was “ready to be collaborative.”

“Then you’ll see that there are times where there will be tension,” she said. After emphasizing potential areas of common ground, she mentioned the prospect of Mr. Adams’s more assertive policing policies and added: “We’re going to be ready for a fight on those things.”

There may also be battles over education. Mr. de Blasio recently vowed to begin phasing out the gifted program in the city’s schools, which puts children on different academic tracks and has been criticized for exacerbating segregation. The issue inspires strong passions among parents.

Mr. Adams has indicated that he wants to keep and expand access to the program, while also creating more opportunities for students who have learning disabilities, as he did. He supports universal screening for dyslexia.

More immediately, he faces the task of filling out his government.

Throughout the campaign, Mr. Adams faced significant questions from Mr. Sliwa — and the news media — over matters of transparency, residency and his own financial dealings. The people he hires for his administration will play a significant role in setting the tone on issues of ethics and competence.

Asked what he was looking for in the powerful position of first deputy mayor, Mr. Adams said on Tuesday that his “No. 1 criteria” was “emotional intelligence.”

“If you don’t empathize with that person, you will never give them the services that they need,” he said.

For some voters, it was Mr. Adams’s own life experience that compelled them to turn out.

Mark Godfrey, a 65-year-old Black man, said Mr. Adams’s rise showed that “there are subtle changes that are occurring in the U.S.” related to racial equity and representation.

“He’s been on both sides,” Mr. Godfrey said of Mr. Adams’s experiences with law enforcement. “He’s been a survivor, and he’s been part of the change.”