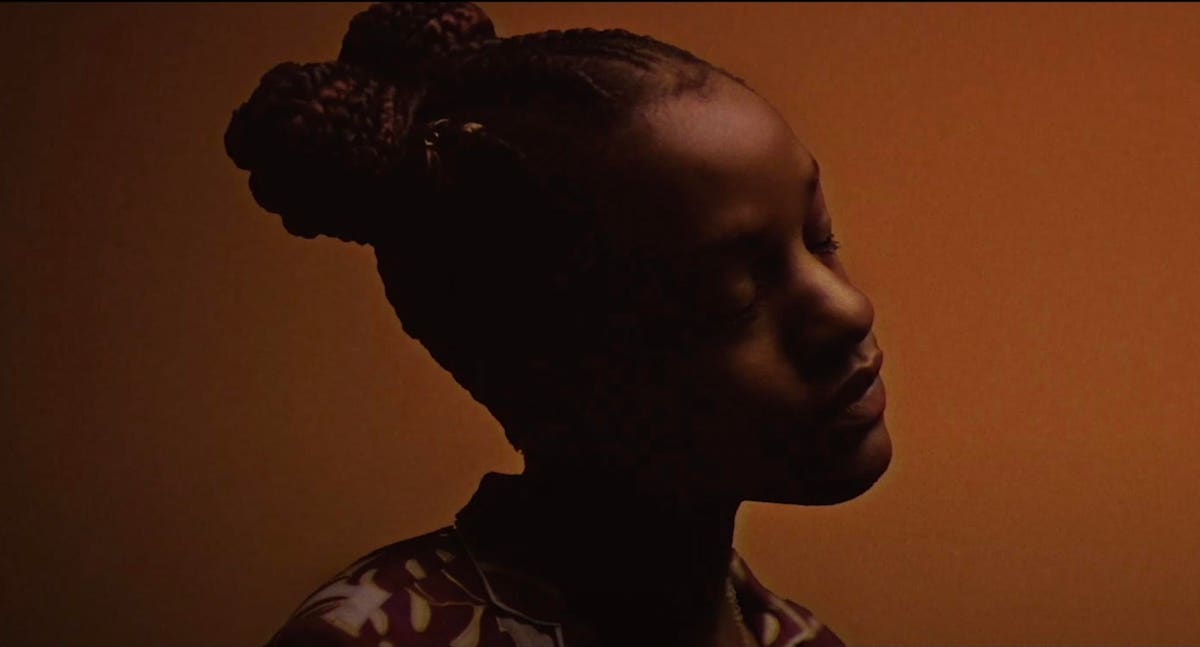 Love remains one of humankind’s greatest enigmas. It drives people to do things they normally wouldn’t, and has the power to make people feel anywhere from euphoric to desperate.

No one can tell you about the trials and tribulations of pursuing love more than Cameroonian American artist ENAKA. In addition to being a singer, songwriter, producer, and director, ENAKA is a regular person with countless stories about dating and romance in your twenties. But unlike other people, the Atlanta-bred artist did what any inspired creative would do: she wrote about them to document the experience. “Chasing Amour,” her new single off her upcoming EP Touching Amour, is the culmination of years of highs and lows in the romance department. The video for the single, out today, brings ENAKA’s vision of finding a worthwhile love to life.

ENAKA’s tendency to write down her feelings has been a part of herself from a young age. She wrote her first song in elementary school based on her school’s anthem, and has been constantly writing music since the age of 8. “I had notebooks full of raps,” she tells Forbes of the time.

She recorded her first song when she was 15, and by the following year, she had released her debut project. “I put out my first mixtape when I was 16 on DatPiff. It was called Who’s That New Girl?, and it was a lot of very childish, but also young and positive, ‘stay in school’ kind of records,” she recalls, chuckling. “I think I was more so influenced by mentors and other adults to make music like that.”

ENAKA worked with producers who went to her high school on both Who’s That New Girl? and its sequel Who’s That New Girl? (Second Semester). One of those producers was Go Grizz, who has since gone on to work with the likes of DaBaby, Lil Wayne, Kevin Gates, and Atlanta’s own Future. It wasn’t until she was in college in New York City that she started experimenting with making her own beats.

While studying in NYU’s Music Business program, she discovered another passion that she wanted to dive into headfirst: the world of film. “I was writing about my experiences living in New York throughout undergrad, and I just realized I had such unique experiences, but also I would meet the most fascinating characters here in the city,” she remembers. “I was just documenting everything as fervently as possible. So by the time I was like a senior, I was like, ‘Okay, I have like all of these ideas, but I don’t know how to put them in the medium of film. I can see it in my head, but I don’t know how to like actually make this into a visual piece.’”

While ENAKA’s interest in film was largely born when she was older, her love of storytelling for others dates back to childhood. She went to a performing arts high school with a focus on theater, and had been acting in stage shows since her mother put her in arts summer camps as a child. “I didn’t really feel that drawn towards theater and acting,” she admits, “but I remember the first time I wrote a piece and actually had actors perform it, it was my senior year, and we got to create a one-act play. I made a one-act play that was a spoof about African parents, and it was so fun being able to perform it myself and also with classmates.”

“That’s when when the spark, I think, for writing screenplays and monologues came about.”

After taking a hiatus from music through her college years, ENAKA began to refocus on her creative pursuits once she started film school. She adopted the ENAKA moniker — her real middle name — and juggled writing songs and screenplays and filming various projects for school. It was during this time that she wrote “Chasing Amour.”

She connected with Boston-based producer Melks at A3C Festival in Atlanta, and they continued to work together over subsequent months. One of his beats that she fell in love with was what would eventually become “Chasing Amour.” “It was just so delicate, but so soulful, and it still had that trap soul feel,” she muses.

“I recorded the record when I was in Atlanta in 2018, and when I was writing it then, I was really inspired by shifting my perspective into not being this girl-crazy 22-year-old star,” she laughs. “So for a while, it felt like I’m actually chasing this thing; I’m chasing this idea, this concept of love and infatuation.” Naturally, she wanted to put her feelings on paper. “I’m tired of chasing! I want to step into the energy of attracting. And it’s funny because even though the concept came about three years ago, I don’t think that I actually started practicing that really until now.”

Still, ENAKA kept “Chasing Amour” in the vault for over three years, waiting until the right moment to release it to the world. “I sat on it until we had the visuals ready and all of those things because I really wanted to put it out as a cohesive piece,” she says. “So I purposely held out on dropping this record until I knew the EP Touching Amour was closer to being ready to be released, as well as the music video.”

Even after filming the video for “Chasing Amour,” she and her team continued tweaking every element of the visual until it was perfect. “I’m happy that we did [take our time] because the shape that it’s in now is not where it was a year ago — not even close,” she says proudly. “Taking that time is a necessary part of the creative process. Editing, writing, making beats — with everything I do, I always have to come back to it after a period of time with fresh eyes and fresh ears.”

Since launching her career as ENAKA, the singer has been surprised at nearly every turn by the challenges and triumphs that up-and-coming artists face. One of her favorite things to witness is how her music transcends borders and languages. Her song “Désolé,” for example, was once added to an African playlist on Apple Music, and she watched as people in places like Portugal, Japan, Martinique, and across the African continent started consuming her music. “I think that that’s been the most surprising: seeing how far the music can really travel,” she says. “That’s been actually really inspiring and rewarding because you make music and you never know who can connect with it.”

Now, as she gears up for the next phase in her career, she’s more excited than ever about the path ahead of her. And that path isn’t just limited to music: she wants to do it all, both in front of and behind the camera. “I love being in front of the camera for my own projects. I feel most connected to the characters that I’m able to write for myself,” she says. “I look forward to directing more projects with other actors who I’ve been wanting to work with and have revered and admired most of my whole life. The thought of that gets me excited.”

“I’m also looking forward to being able to produce records for other artists,” she adds. “I’m really trying to Quincy Jones this s***!” She’s especially inspired by Dev Hynes’ recent foray into composing for films like Queen & Slim and Passing, and envisions herself doing the same. “That’s something I’m very interested in,” she says. “I compose all the music in my short films. Everything that I write, I already have the sound in mind.”

ENAKA refuses to be boxed in to just one creative pursuit. Instead, she sees herself as a jill-of-all-trades, working across different areas of entertainment and all the intersections where they meet. “I would love to continue writing my own projects, directing projects, writing for other artists, producing for other artists, and just collaborating with other like-minded and talented folks across all mediums,” she says. “I don’t want to restrict myself to any medium.”

When ENAKA dreams about her future and everything it includes, she thinks back to the premiere of her short film Mercury Afrograde at BlackStar Film Festival earlier this year. Getting to see a film that she conceptualized, wrote, scored, and directed on the big screen was a fulfilling moment that she’ll never forget, and it showed her that she was on the right path. “It really made me feel very validated as a filmmaker, watching it with that type of audience — my intended audience,” she recounts fondly. “Just feeling the energy from the audience and watching them experiencing and enjoying the movie, there’s no better feeling in the world.”