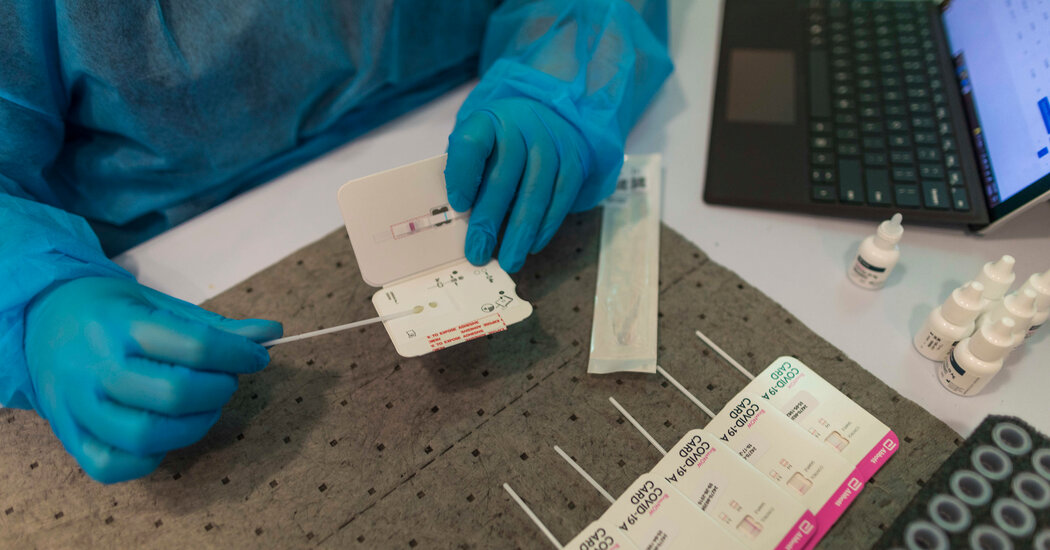 A small, new real-world study suggests that two widely used at-home antigen tests, the Abbott BinaxNOW and Quidel QuickVue, may fail to detect some Omicron infections even when people are carrying high levels of the coronavirus.

The study, which has not yet been peer-reviewed, focused on 30 people infected with the virus at five workplaces that experienced what were most likely outbreaks of the Omicron variant in December. The people received both saliva-based P.C.R. tests and rapid antigen tests using nasal swabs.

It took three days, on average, for people to test positive on a rapid antigen test after their first positive P.C.R. result. In four cases, people transmitted the virus to others while the rapid test showed the negative result, according to the study, which was conducted by several members of the Covid-19 Sports and Society Working Group.

It is not clear whether the infections were missed because the antigen tests are inherently less sensitive to Omicron or because saliva tests may be better at detecting the new variant.

But the results are consistent with other preliminary evidence that the at-home tests that many Americans have come to rely on — at least as currently administered, with a nasal swab — may fail to detect some Omicron cases in the first days of infection.

The researchers said they shared their results with federal officials — including at the White House, the Food and Drug Administration and the Centers for Disease Control and Prevention — in real-time, as the outbreaks were occurring last month.

“They’re aware that there are flaws with antigen testing,” said Dr. Robby Sikka, an author of the study and chair of the working group.

The study comes a week after the Food and Drug Administration released its own update on the effectiveness of the rapid antigen tests. “Early data suggests that antigen tests do detect the Omicron variant but may have reduced sensitivity,” the agency said.

Many of the studies are early and small, and much more data is needed. The tests, which can deliver results at home in minutes, remain an important public health tool, and positive results are especially likely to be informative, many scientists said. (The wait for P.C.R. results can stretch for days.)

“The message is not that we should stop using these tests,” said Isabella Eckerle, a clinical virologist at the University of Geneva in Switzerland.

But people should be cautious about interpreting negative results, especially when they have symptoms or believe they may have been exposed to the virus.

“It’s not a ticket that allows you to go back to normal or to drop any other measures,” Dr. Eckerle said.

Antigen tests are designed to detect proteins on the surface of the coronavirus. If mutations in the virus change the structure of these proteins, antigen tests might fail to detect the variant.

The Omicron variant has about 50 mutations, including more than 30 on the spike protein alone. Most rapid antigen tests are designed to detect more stable targets, which are far less mutated in Omicron.

Still, even minor-seeming mutations can affect a virus’s surface proteins, “sometimes in non-obvious ways,” said John Moore, a virologist at Weill Cornell Medicine. “Only experimental data can determine whether there is an impact or not.”

The F.D.A. in September told makers of rapid tests that they would be required to continue to test their products as new variants emerged, and, if asked, to share those results with the agency.

Many companies have announced that their tests can detect Omicron, and several independent scientists said that they believed the tests should be capable of recognizing the variant, especially when present at high levels. But a few new studies raise questions about the tests’ sensitivity.

The F.D.A.’s update stemmed from an evaluation it is doing with the National Institutes of Health, said Bruce Tromberg, director of the National Institute of Biomedical Imaging and Bioengineering. The scientists evaluated the antigen tests using pooled samples of nasal mucus collected from multiple people with Omicron, as well as similar pooled samples from Delta patients.

Scientists then diluted each of these pooled samples until the antigen tests no longer detected the virus. The tests were able to detect more dilute solutions of Delta samples than Omicron samples, suggesting that the tests may be less sensitive to the new variant, Dr. Tromberg said. Still, he added, in real-world settings, “it may not translate into any different sensitivity.”

An F.D.A. spokeswoman, Stephanie Caccomo, said last week that studies were underway “to confirm the reason for the apparent decreased sensitivity.”

“Once that is known,” she said, “adjustments to existing tests can be undertaken by each developer with support from the F.D.A., if appropriate.”

The F.D.A. update was not the first hint that some antigen tests may be less sensitive to Omicron. Dr. Eckerle and her colleagues recently evaluated the performance of seven antigen tests against samples of the virus grown from specimens taken from people infected with Omicron. Overall, the researchers found, the tests were less sensitive to Omicron than to previous variants.

But there was also vast variability in the performance of the different tests, most of which are not available in the United States. And an Australian study, which examined a mostly different collection of antigen tests, found that the tests had a similar sensitivity to Omicron and Delta.

“Each test is going to have to be evaluated independently any time there’s a new variant,” said David O’Connor, a virologist at the University of Wisconsin, Madison who urged people not to stop using rapid tests. “And that takes some time.”

The new study focused on five New York and California workplaces that had virus outbreaks in December. In 29 of 30 people, samples of the virus produced a telltale genetic pattern on P.C.R. tests, suggesting that these individuals were most likely infected with Omicron.

Each participant took P.C.R. and antigen tests daily over a period of up to 10 days. The discordant results overwhelmingly came during the first three days of infection.

The study’s other authors are Blythe Adamson, the founder of Infectious Economics, a public health consulting company, and Dr. Prem Premsrirut, the chief executive of Mirimus Laboratories, which offers saliva-based P.C.R. testing.

An Abbott spokesman, John Koval, said on Wednesday that the finding that a P.C.R. test is more sensitive is “not new.”

“Due to immediate turnaround time, frequent rapid antigen testing does slow transmission — and with a highly infectious variant frequent testing is needed, which is not realistic with P.C.R.,” he wrote in an email.

Quidel’s president, Douglas Bryant, said in a statement that the company performed recent testing using samples from South Africa and confirmed that its rapid tests are detecting the Omicron variant.

A company spokesperson also said that it was not surprising that saliva-based P.C.R. tests detected the virus before nasal swabs did, if the study accurately concluded that viral load peaks first in saliva. The company noted that its rapid tests only have F.D.A. clearance to collect nasal swab specimens.

In a smaller analysis, of five participants who took both nasal and saliva-based P.C.R. tests, the researchers found that the levels of virus peaked in saliva samples a day or two before they peaked in samples collected from the nose.

Those findings are consistent with a recent report from South Africa, which has not yet been reviewed by experts. The researchers found that P.C.R. tests picked up a higher share of Omicron infections when saliva samples — produced by the rubbing of a swab inside the cheeks, around the gums and tongue — were used instead of nasal samples. The reverse was true for Delta.

“Ideally, until we can directly compare the relative sensitivity of the antigen tests, my suggestion would be to test both sites,” Diana Hardie, a clinical virologist at the University of Cape Town, who led the research, said in an email.

One possible explanation for the findings is that Omicron replicates faster or earlier in the throat and mouth than in the nose.

“While we’ll have to wait to see if the science bears out, that might be an indicator that that’s where the virus is growing first,” said Gigi Gronvall, an immunologist and testing expert at Johns Hopkins Bloomberg School of Public Health. “So if you’re going to look for the virus, which is what the tests do, then you may find more of it faster in the throat swab over the nose.”

Anecdotal reports have also emerged that some people who tested negative on antigen tests when they swabbed inside their noses received a positive result when they instead swabbed the back of their throats.

“There’s a lot of chatter around this,” said Nathan Grubaugh, a virologist at the Yale School of Public Health. “Obviously, that warrants further investigation.”

Omicron’s rapid replication also means that there is a narrower window to catch the virus before it begins spreading, and that people may need to test themselves sooner after a potential exposure and as close as possible to an upcoming gathering or event, experts said. They may also need to test themselves more frequently overall, a particular challenge when the tests are in short supply.

People who may have been exposed to the virus should take at least two antigen tests over the course of about two days, experts said.