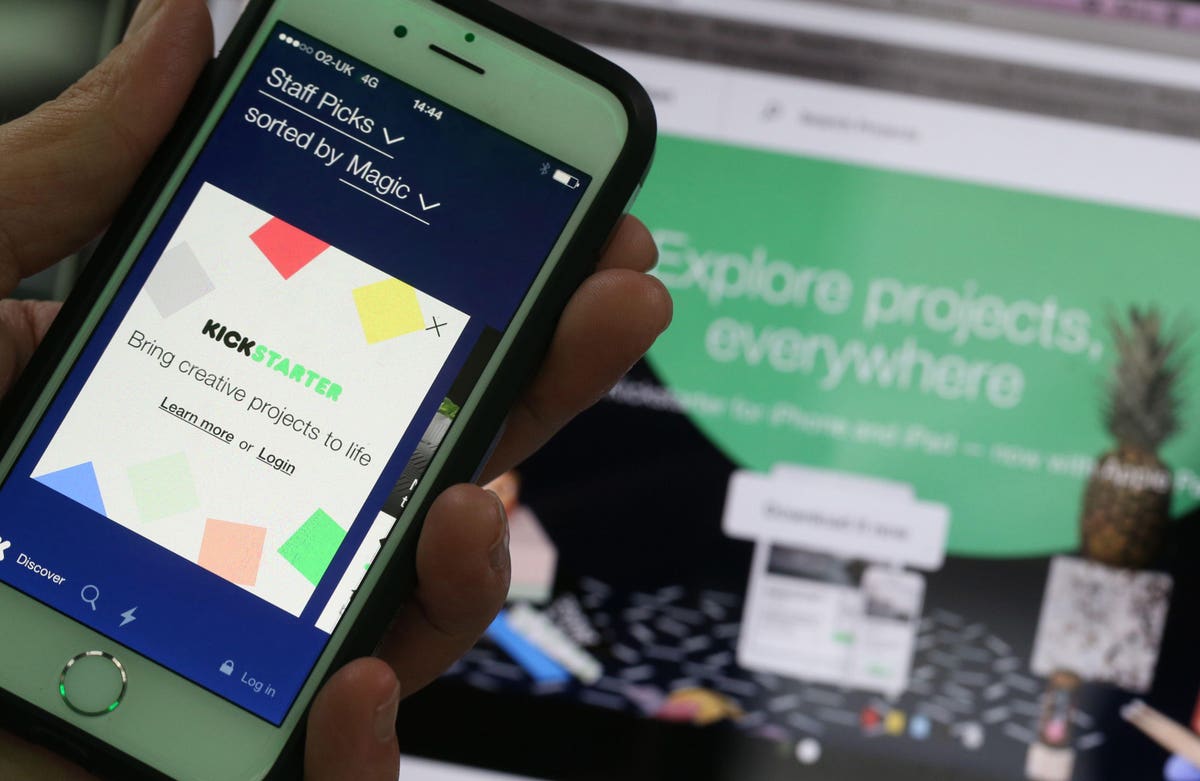 For the crowdfunding giant Kickstarter, which has become the crucial hub for comics self-publishing over the last decade, a triumphal 2021 has given way to a winter of discontent following last week’s announcement that the public benefit company was incorporating blockchain technology into its platform, a move which threatened to overshadow the remarkable results it has delivered for creators and fans.

The Best of Times. First the good news. In an exclusive interview, Kickstarter Director of Publishing and Comics Outreach Oriana Leckert announced the company just posted its third “best year ever” in a row, topping a strong 2020 with an even stronger performance year-to-date in 2021. “2021 has already raised more money, had more [comics and publishing] projects and a higher success rate, so by every metric, we’re killing it,” said Leckert.

In 2020, comics and publishing creators launched 2379 projects, of which 1758 were funded, for a 74% success rate. In 2021, those numbers were 2825 projects (2071 successful), for a 77% overall success rate, tops among categories on the platform. Projects that had at least 25 backers – Kickstarter’s informal metric for identifying a serious effort to reach an audience beyond friends and family – succeeded a remarkable 86% of the time.

“That’s just bananas, an insane metric,” said Leckert, who believes that it demonstrates how well comic creators have connected to their community and are serving them with unique projects that might fall outside the reach of traditional publishers.

Translated into dollars, 2021 saw funders raise more than $30 million so far from 207,000 backers, compared to $26 million from 214,000 backers in 2020, a year that saw more people supporting independent projects due to the unique conditions of the pandemic and lockdown. Despite the 2020 surge in backers, 2021 was actually more efficient in terms of dollars raised. Considering the total size of the comics publishing industry in the United States was just over $1.2 billion according to estimates from ICv2/Comichron, Kickstarter-backed independent projects represent a market share of about 2.5%, which would place it in the lower ranks of the top 10 if Kickstarter were a commercial publisher.

Finally, Leckert announced that Kickstarter had passed one million total backers of comics projects since the company’s 2009 launch. That is unsurprising given the central role that crowdfunding now occupies in the independent creator ecosystem (and, increasingly, in the formal publishing industry as well), but quite a journey since the early days when Kickstarting a project was viewed as a small step up from panhandling.

The Worst of Times. Considering this avalanche of positivity, it’s unfortunate that the company issued another major announcement in the same timeframe, one which was not well-received by a vocal segment of the creator community. On December 8th, co-founder Perry Chen and CEO Aziz Hasan announced the development of “an open source protocol that will essentially create a decentralized version of Kickstarter’s core functionality” on a public blockchain, open to creators, publishers and even other platforms. Chen and Hasan said they chose the Celo chain, a carbon-negative alternative to energy hogs like Bitcoin and Ethereum, and are organizing the initiative through an independent governance lab.

Despite the care that Kickstarter took in positioning this effort within its mission and values, blowback in the creator community was vocal and swift. Over the last year, opposition to all things crypto – which often begins with well-founded concerns about environmental impact, the scammy nature of some quick-buck NFT projects, and general distaste with the finance and technology culture of blockchain businesses – has hardened into a marker of tribal identity within certain creator circles, and Twitter mobs mobilize to shout down any initiatives, however well-meaning. Comics journalism site The Beat chronicled a litany of complaints about Kickstarter’s announcement coming from exactly the kind of independent creators who make up the platform’s core constituency. Comics creator Reimena Yee has organized opposition to Kickstarter’s plans in a post that has, to date, been retweeted over 1200 times.

On December 14th, the company released a prepared response to questions I posed to them last week that attempts to explain the rationale behind the decision, reassures creators that there will be no forced-march into crypto-land (the platform will continue to support what crypto-folks call “fiat currency,” or normal money, for all transactions), and tries to create a broader context for the move as a net positive for creators moving forward. Kickstarter also details the minimal environmental impact of the Celo platform. Notably absent is any statement saying the company will back off this initiative.

Considering the historical synergy between Kickstarter and its community, both the company’s move and the response to it seem like a big deal. How could a company that’s done so much to serve the very specific community of independent creators fail to anticipate how this move would be received? And frankly, why does the community that has embraced and benefited from Kickstarter’s meteoric rise not give the platform any credit whatsoever for making the most environmentally-responsible and creator-centric choices on a strategy that the company clearly sees as essential to its own economic future and that of creators moving forward?

Kickstarter’s success over the past decade, and particularly in the past couple of years, shows it has become a critical player in the creative economy. The huge market momentum toward blockchain in all kinds of scenarios shows it is unlikely to go away despite the most vocal opposition from some corners of the market. The irony is that the blowback to the downsides of blockchain technology is influencing developers to seek better, more energy-efficient solutions, but companies like Kickstarter that choose the most environmentally-sound solutions still face criticism for breaking ranks with the more general opposition to the entire crypto enterprise.

As they say in the comics, “to be continued.”

Here is Kickstarter’s responses to questions I posed to them on its crypto plans, per the company spokesperson.

Why transition to blockchain technology at all? Was there something inefficient with the existing system that necessitated the change?

To truly serve our mission, we need to build on what made Kickstarter so innovative in the first place: the power of a large network of people working together towards a common goal.

Essentially, we want to make crowdfunding for creative projects more available to creators and backers around the world.

How will moving to a decentralized protocol help comics creators better reach their audiences?

First, it’s important to be clear that if you are a creator or a backer, the Kickstarter experience will stay the same. You won’t suddenly be required to back projects or accept funds in cryptocurrency.

Our community can still use normal credit / debit cards to pledge to campaigns and creators will continue to receive local currency (aka dollars, euros, pounds, etc.) to fulfill their projects.

But we do expect creators will benefit from the improvements made via the community’s contributions to the underlying protocol that Kickstarter could adopt.

Why did you choose partnering with Celo for the blockchain platform? How, briefly, do their carbon offset programs work? I’ve seen quite a few people on Twitter concerned about environmental impacts of the change.

Kickstarter is a Public Benefit Corporation that has pledged to limit our environmental impact.

This is one of the reasons the new company developing the protocol will be working with Celo, an open source and carbon negative blockchain platform.

How, if at all, will the interface change for creators and backers?

Bottom line: You can still use normal credit / debit cards to pledge to campaigns and creators can continue to receive local currency (aka dollars, euros, pounds, etc.) to fulfill their projects.

In the coming years, as the protocol is released and an ecosystem develops around it for anyone to build on, we imagine all sorts of new tools designed by the community that support creators improving the experience — from campaign fulfillment, project budget calculators, and community engagement to project discovery, feedback systems, and beyond.

As the protocol evolves to embrace these innovations, Kickstarter in turn will decide which, if any of these tools, we will leverage and enable use of for creators on the Kickstarter website. We’ll continue to be in control of and manage the creator’s experience, which will continue to be user friendly and inclusive.

Some people are concerned about a move entirely to crypto currencies. How much will these newer forms play in the transition and will standard payment forms still be commonplace?

To be clear, whether you are a creator or a backer, no one will suddenly be forced to use cryptocurrency! You can and will continue to be able to still use normal credit / debit cards to pledge to campaigns and creators can continue to receive local currency (aka dollars, euros, pounds, etc.) to fulfill their projects.

We all live in our own little bubbles. What has the response been like from other Kickstarter communities like gaming or film?

Our team has been hearing a wide range of reactions from across all the creative communities that rely on Kickstarter. And a number of artists and leaders at cultural institutions have reached out to learn more, express excitement, and find out how they can participate in and build the future of crowdfunding.

We also understand that our community is going to have a lot of questions about this new initiative and we’re speaking with creators one on one. We may not have all the answers, but we’re committed to bringing our community along on this journey.

What would you say to help calm the anxiety of creators with current or soon to be released projects? Some of these projects have been in development for years and folks are a bit scared.

First, it’s important to note that nothing will happen overnight – and again, the Kickstarter experience will stay the same for creators and backers. We are committed to being thoughtful and transparent as any changes are rolled out.

When Kickstarter first launched 12 years ago there was a similar sentiment of anxiety with pockets of creators who were unsure what to make of this new model of going directly to audiences to fund creative projects. As people learned more that uncertainty subsided. In the days after the announcement, we’ve seen support for projects continue at the same level as the weeks prior. Longterm, Kickstarter will only get better.