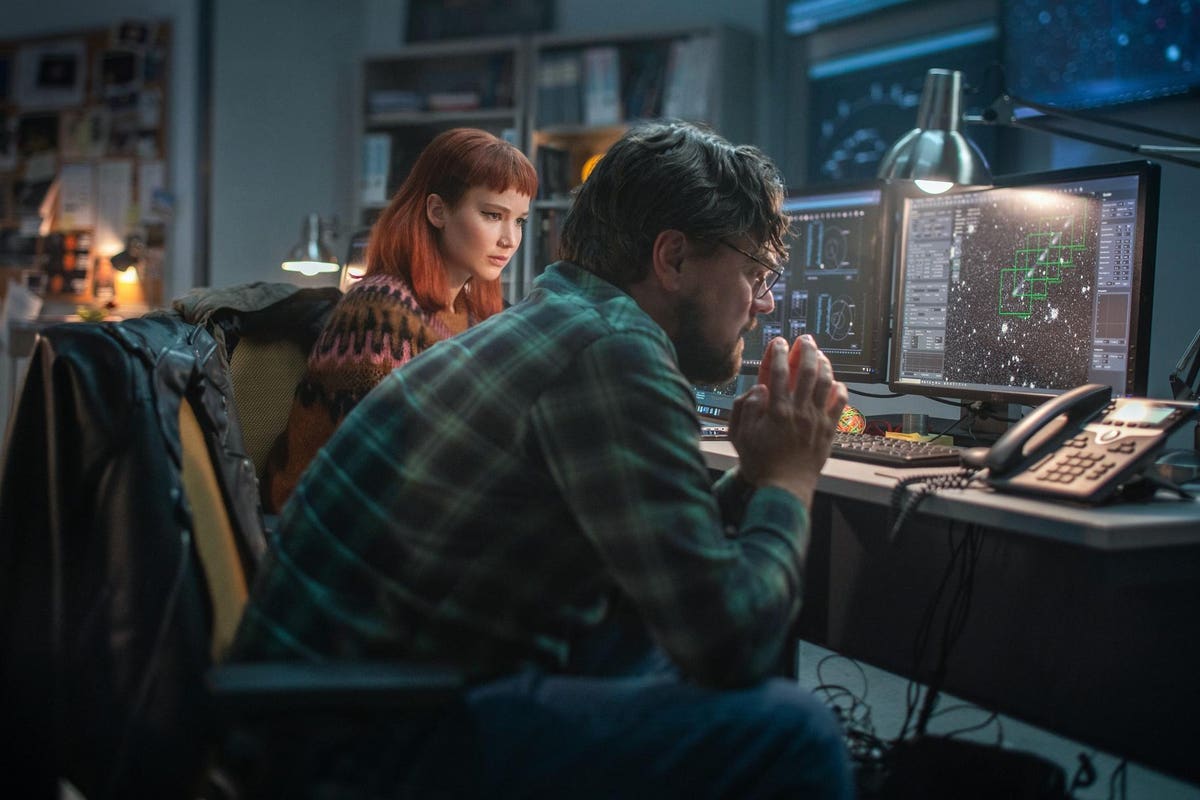 What would we do if we learned that an asteroid capable of ending life as we know it on planet Earth was on a collision course with the planet? Would we even listen to the scientists trying to warn us? How would we respond? Are we even remotely prepared to deal with such an event? “Don’t Look Up” is a new movie from Netflix that explores those questions—albeit as a comedy rather than a scientific documentary.

“Don’t Look Up” brings an impressive roster of A-list actors together. Leonardo DiCaprio and Jennifer Lawrence are astronomers trying to warn world leaders and the population in general about the impending catastrophe. Meryl Streep plays the US president, and Jonah Hill plays her son…and Chief of Staff. The cast also includes Tyler Perry, Ron Perlman, Ariana Grande, Timothée Chalamet, and more well-known celebrities.

The real answer is that we would probably be screwed. When I first saw the trailer for “Don’t Look Up,” I was immediately reminded of the book “Warnings: Finding Cassandras to Stop Catastrophes” by Richard Clarke. That book looks at a number of major catastrophes that were avoidable and that some expert had tried to alert the world to, but they were ignored and dismissed—resulting in tragedy.

Even though we know that such an event has happened in the past and is responsible—in whole or significant part—for the demise of dinosaurs on the planet, it is easy to dismiss the possibility. Space is unfathomably huge, and the odds of a planet-ending asteroid impacting Earth are infinitesimally small, so it does not seem like a realistic concern for most people. It is still possible, though.

Judging by the fact that half of the population continues to reject the science of Climate Change despite overwhelming evidence and escalating frequency and destructive power of weather events, or that people around the world are ignoring experts when it comes to the COVID-19 pandemic and vaccinations, it’s fair to assume that a significant portion of the world would also reject facts and science about an impending asteroid collision. Unfortunately, many people like to wear their ignorance with pride.

Seriously, What Would We Do?

Fortunately, though, we do have brilliant scientists focused on this issue. I had a chance to speak with Dr. Amy Mainzer—a professor of planetary science at the University of Arizona. Her research interests include asteroids and comets, particularly those that approach the Earth; instrumentation for remote sensing; and applications of remote sensing for monitoring invasive species on Earth.

Dr. Mainzer is the principal investigator of NASA’s Near-Earth Object Wide-field Infrared Survey Explorer (NEOWISE) mission—an Earth-orbiting space telescope that is searching for Earth-approaching asteroids and comets. She is also the lead of the Near-Earth Object (NEO) Surveyor mission, which will carry out a comprehensive survey of asteroids and comets using a dedicated space telescope.

On top of all of that, she was a science advisor for the movie “Don’t Look Up.” She explained that her job was to help the director, as well as the cast and crew and the visual effects team, portray the science as accurately as possible. “My goal was to really help just represent the science and the science community and just how scientists think—how we act—as realistically as possible.”

She told me that one of the things that appealed to her about the project is that even though it’s science fiction, and it’s a comedy, everyone was also very focused on trying to get the science right as much as possible. “It’s going to hopefully make you laugh and make you think, but the whole point is to try to show how a scientific discovery, makes a huge impact on people’s lives, and how that process plays out.”

We talked about the likelihood of such an event. I pointed out that when we talk about encryption keys we always focus on the sort of “worst-case scenario.” For example, it is estimated that it would take millions of years—even using the most powerful supercomputer in existence today—to crack 256-bit AES encryption. But that assumes you get the encryption key on the last try. It is also theoretically possible to just guess it right the first time and “crack” 256-bit AES encryption in a few minutes.

The same thing applies to things like winning the Powerball lottery, or asteroids hitting Earth. It is statistically very, very unlikely—but it is still possible. Dr. Mainzer said that from her perspective when you have something where the probability is very low, but the potential consequences are high, we can’t just cross our fingers and hope luck stays on our side.

“My position is we should be going out and looking for these objects. Just go out and look, and either you find one that’s headed your way, or you don’t. And if you don’t, you can just cross this worry off of our list of collective worries,” declared Dr. Mainzer. So, in terms of preparedness, where we are today is the following: We know where most of the really big asteroids are. Now notice I didn’t say comets. I said asteroids. We know where more than 90% of the really truly large global extinction event causing asteroids are. We found those. They’ve been tracked—no close approaches that we need to worry about anytime in the next century or so.”

She stressed that it’s important for us to find asteroids on a trajectory to hit Earth as early as possible, so we have time to develop and implement a plan long before impact. “If you have 10 years, now you have time—depending on the size of the object, its exact composition, its trajectory—you do have time to put together a mitigation mission of some sort. So, something that can basically bump the asteroid or the comet into a different trajectory so that it’s just enough to miss the Earth, either delaying the arrival time or, you know we’re increasing it a little bit, or just moving it aside.”

On November 24, 2021, NASA launched its Double Asteroid Redirection Test (DART) mission aboard a SpaceX Falcon 9 rocket. That mission is designed to test just such a kinetic impactor mechanism—to go out and bump a small asteroid and determine how effective the solution is for nudging an asteroid and altering its orbit.

That is all very comforting. Ultimately, though, the success of those efforts will rely on enough people—or at least the right people—being willing to accept the science and listen to experts rather than dismissing them as “Cassandras” and ending up as a case study in Richard Clarke’s next book.

Regardless of whether you want to ponder the potential existential crisis or try to understand what steps are being taken to identify and avoid such catastrophes, or you just want to be entertained with some dark humor from an all-star cast, “Don’t Look Up” is a good movie. I recommend seeing it.

“Don’t Look Up” opened in theaters this weekend and will be available to stream on Netflix beginning December 24.