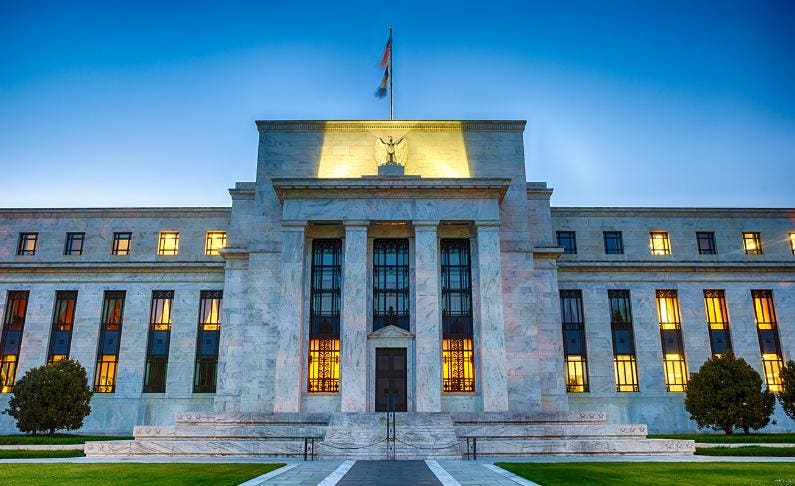 That’s one conclusion investors might take following the central bank’s decision today to keep rates unchanged. It said a taper could be warranted “soon” if “progress continues broadly as expected.” Though the Fed didn’t spell out the exact meaning of “progress,” it’s probably a reference to the rise in inflation and fall in unemployment we’ve seen over the last few months.

The market, which was already up sharply before the Fed announcement, added to gains in the immediate minutes afterward. Apparently, investors liked hearing that there’s no solid date yet for a taper, but analysts said they’re now expecting the Fed to announce a taper in November and begin lowering its bond purchases before the end of the year. That was basically what many analysts had expected going into this week’s Fed meeting, and the Fed’s statement didn’t seem to change that sentiment.

A taper announcement “could come as soon as the next meeting” in November, Fed Chairman Jerome Powell said in his press conference immediately after Wednesday’s meeting, but that will likely depend on economic performance and doesn’t sound like it’s set in stone.

It would take a “reasonably good” September employment report to meet the test of progress, Powell said. “The test is all but met,” he said, and he doesn’t need to see a “very good” jobs report, just a decent one. Other Fed officials, he added, believe the test for a taper has already been met.

Today’s meeting also offered a chance for investors to get the latest thinking from Fed officials on the pace of economic growth and when the central bank might begin raising rates. The Fed definitely sounds less bullish now on 2021 growth than it did back in June before the Delta variant, but it’s interesting to see it getting more bullish about years to come. That could be one reason why the Fed’s “dot-plot” of forecasts for future rate increases now shows more officials expecting a first hike next year, not in 2023 as we saw in the last dot plot.

The dot plots appear to have firmed up, though all participants project rates to remain flat in 2021. Nine of the 22 Fed officials expect a rate hike in 2022, up from seven who did back in June. Seventeen Fed officials see hikes in 2023, vs. 13 who did in the previous dot plot.

This doesn’t mean a 2022 hike is something anyone can depend on. Only that it seems a bit more possible a hike could occur next year. This is going to be interesting to watch as it develops. The Fed hasn’t hiked rates since late 2018.

In the past, aggressive rate hikes have helped to spark bear markets, so the Fed is likely working hard to avoid these types of hikes. It’s already promised to give investors a very long-term warning about plans to begin raising rates and has also said that investors shouldn’t view tapering as necessarily a “signal” for lifting rates. The two processes should be seen as separate, Powell said in a speech last month.

As far as the economy, The Fed now projects gross domestic product (GDP) to rise just 5.9% this year, compared to a 7% forecast in June. This may reflect some slower economic data growth over the last few months as the Delta variant took hold. The weak August jobs report and soft consumer sentiment readings over the last month or two might play into this.

At the same time, it’s good to see the Fed appear to acknowledge the recent inflation pressure. They now project core inflation (not including food and energy prices) to rise 3.7% this year, compared to the 3% the Fed forecast last time. Then they expect inflation to mellow, falling to 2.3% in 2022. That’s up from their previous 2.1% estimate, but not historically high.

What may raise more questions is the Fed continuing to project accommodative policy until inflation comes down toward 2% and employment reaches the Fed’s “maximum” levels. The market historically has been very sensitive to worries that the Fed might start skating to where the puck is rather than where the puck is going, so to speak, which would mean waiting too long to raise rates.

The Fed and Powell have addressed this concern over and over this year, saying higher inflation isn’t enough for them to begin tightening if unemployment hasn’t also come down enough. Also, they continue to say inflation will moderate next year as supply constraints from reopening begin to ease.

The Fed does expect unemployment to slip to 4.8% by the end of this year and 3.5% by the end of next year. That’s in the realm of pre-pandemic levels.

“Indicators of economic growth have strengthened,” Powell said in his press conference today. “Conditions in the labor market have continued to improve.”

He added, though, that the recent rise in Covid cases has hurt employment growth in Covid-sensitive industries like travel and restaurants. That played into the Fed’s lower adjustment to 2021 GDP projections. He expects this issue to ease as the pandemic gets back under control.

It’s pretty obvious, looking at the Fed’s projections, that it expects inflation to be “transitory,” the word it’s used to describe this burst we’ve seen in 2021. Powell, in his press conference, promised that the Fed would use its tools to fight inflation if it persists longer than expected or goes higher than expected, but he didn’t map out what those tools would be or what levels would mean using them.

He noted, as he has before, that reopening-related supply bottlenecks are behind the rising inflation.

Wednesday’s Fed meeting was expected to focus on how and when to begin tapering. In response to the pandemic, the Fed started large-scale bond buying in order to provide liquidity to banks and keep longer term interest rates lower. Now that the economy appears to be on stronger footing and much of the world is getting back to normal, the Fed appears to be ready to start tapering down the amount of bond buying, judging from recent comments made ahead of the meeting by both Powell and other Fed officials. To be clear, they’re not planning on ending the bond buying, just scaling it back.

Investors went into the week hoping for some clues on the tapering timeline and the amount of the reductions. In July, the Fed first indicated its intentions to start tapering by the end of 2021. However, it hasn’t been in any hurry to get started. Earlier this month the European Central Bank (ECB) announced its plans to cut back its bond buying but went out of its way to not call it a taper. Central bank officials appear to be concerned that tapering may result in another taper tantrum, like 2013 when yields spiked and stocks sold off as the Fed started to pull back on its post-2008 recession stimulus.

Additionally, investors are trying to get a read on where Fed officials stand on the future of interest rates and will be looking for the infamous dot plot. The dot plot—released once a quarter—shows projections for the federal funds rate. The federal funds rate is a short-term interest rate that helps to set all other rates. Each dot represents one of a Fed policy maker’s target rate range expectations for the end of a particular year. Changes in the dot plot help to forecast potential changes in interest rates. Because inflation has so far shown to be stickier than the Fed had originally expected, many investors were curious to see what, if any, changes take place on the dot plot.

The benchmark U.S. 10-year Treasury yield stumbled into Fed day, falling from recent peaks near 1.38% to trade at 1.31% right before the Fed made its announcement. Last week, there were times when it seemed like investors might be building a bit of premium into the yield in preparation for possible clues on taper timing coming out of the meeting. Those expectations pretty much left the building Monday when we had that huge selloff. Worries about a possible government shutdown could also be playing into the rise in bonds this week, which move opposite from their yields.

Unfortunately for those of us who follow this stuff, the closely-watched “yield curve” that tracks the relationship between the 10-year and 2-year Treasury yields just hasn’t offered much in the way of clues about the economy lately. The 10-year recently held a 109 basis-point premium (1.31% to 0.22%) to the 2-year. A month ago, the premium was 103 points. That’s not too big a change in the great scheme of things, though any sign of “growth” in the curve —meaning the two yields pulling farther apart—is traditionally seen by many analysts as a sign of bullish economic sentiment.

A year ago, that so-called “2-10” curve was just 52 points, so arguably the bond market has already built in a lot of the stronger pandemic recovery economy. If we see the curve narrow from here, it could point toward investors worried about the possible impact of the Delta variant on Q3 and Q4 economic growth and concerns about jitters in China’s economy. The curve may seem like a bit of an arcane concept, but it’s worth following.