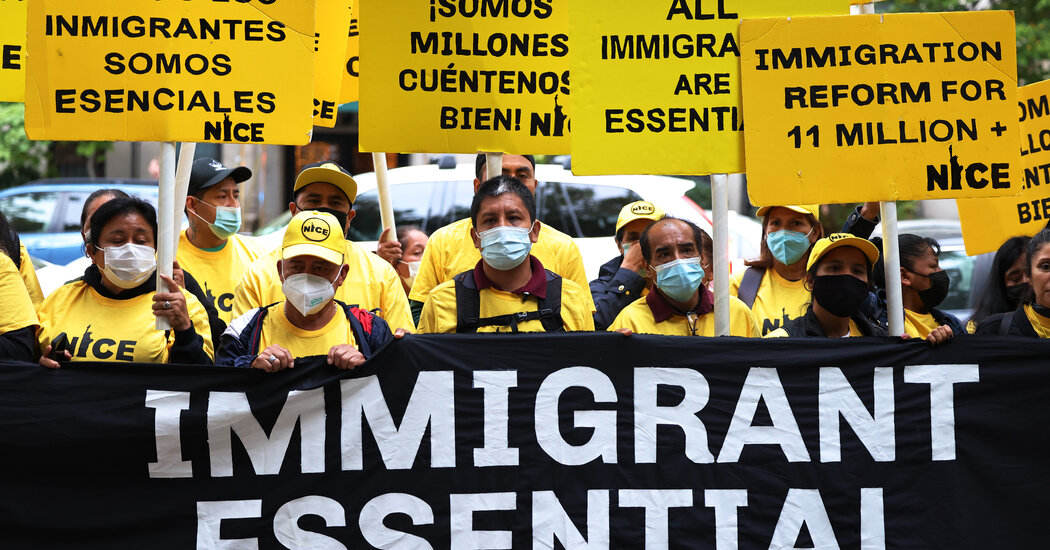 WASHINGTON — As Democrats scramble to ensure that protections for millions of undocumented immigrants are included in a sprawling social-safety net package, Dr. Pranav Singh is focused on a lesser-known plan to address the green card backlog that pushed him to leave his family and job in Iowa.

After nearly a decade of treating patients with respiratory problems, Dr. Singh could no longer bear the uncertainty of living in the United States on a visa that could be revoked if there were a change in his employment.

“I’ve got 15 years in the U.S. and I’m still considered a visa holder or alien,” said Dr. Singh, who returned to India last summer after years of bureaucratic languishing. “How long can you stand that level of abuse?”

When President Biden unveiled an outline of the latest version of the social policy and climate bill on Thursday, it included an immigration provision that could help Dr. Singh and millions of other families and foreign workers, but only if it can make its way past the Senate parliamentarian, who enforces strict rules about what can be included in the package.

The proposal would free up hundreds of thousands of green cards that various administrations failed to use over several decades, making them available for immigrants who are currently caught up in the backlog.

The United States imposes caps by country on the number of green cards issued each year, which means that applicants from countries like India, where many people apply to work in the United States, end up waiting for years.

Under the new provision, those unused green cards would be “recaptured” and made available to applicants. Foreigners who have been stuck on waiting lists would also be able to pay higher fees to move up in the line for legal status.

The proposal comes at a time when Democrats are growing increasingly desperate to make good on the president’s pledge to overhaul the immigration system, particularly while the party also holds both chambers of Congress. Many Democrats and advocates believe it is the best chance to make progress on the issue in the budget bill.

But the plan faces an uncertain path ahead.

Elizabeth MacDonough, the Senate parliamentarian, has repeatedly shot down efforts to include immigration measures in Mr. Biden’s social-safety net package, which is moving through Congress under a special process known as reconciliation that shields it from a filibuster. Only relatively narrow provisions that directly impact government revenues can be included in such bills, and the parliamentarian previously ruled that two other immigration plans did not pass that test.

Democrats argue that the new proposal should satisfy the parliamentarian because it involves reclaiming visas already approved by Congress — a modest tweak of the law, they say, rather than a sweeping proposal such as raising the ceiling for green cards or granting legal status to a new population of immigrants.

Still, skepticism abounds in the halls of Congress. Some Democrats, including Representative Ritchie Torres of New York, have begun calling on their Senate colleagues to overrule the parliamentarian, saying they don’t believe she will embrace any immigration proposals.

In addition to the visa recapture provision, Mr. Biden’s $100 billion plan to overhaul the immigration system includes a proposal to provide protection from deportation for millions of undocumented immigrants who are longtime residents of the country and $2.8 billion for U.S. Citizenship and Immigration Services to more efficiently process migrants.

Some Democrats have been hesitant to single out the legal immigration proposal after the more ambitious plans to provide relief to undocumented immigrants were rejected by the parliamentarian. The negotiations over the spending package have already forced the administration to make grueling cuts to investments in community college, paid leave and proposals to address climate change. The tension over how much to compromise has stretched over to immigration policies, an area in which supporters are growing increasingly impatient for drastic changes.

“I am certainly supportive of clearing the visa backlog,” said Senator Bob Menendez, Democrat of New Jersey, who last month expressed concern about supporting an immigration proposal “for businesses” without providing a pathway to citizenship.

In recent years, as the Trump administration invoked various travel bans from African and Muslim-majority countries and suspended immigration processing during the pandemic, the United States failed to issue many of the visas.

The result, says Representative Zoe Lofgren, Democrat of California, is harm to both American families and businesses. The backlog for family and employment-based visas has grown steadily in recent years from about 8.7 million petitions in 2018 to more than 9 million in 2021.

For Daishi M. Tanaka, who came to the United States with his parents in 2004, both the proposal to address the legal immigration system and the plan to establish protections for those living in fear of deportation would be crucial.

His Filipino mother and Japanese father, who balanced jobs in carpentry and elder care while in the United States, went back to the Philippines in 2016 after 12 years of waiting for their green cards to get approved.

“The understanding there was they go home to their countries and have some sense of health care,” said Mr. Tanaka, a 24-year-old graduate of Harvard. “They don’t have a fear of deportation and I thought I would get to see them by traveling.”

Mr. Tanaka, meanwhile, received protection from deportation and the ability to work legally through the Deferred Action for Childhood Arrivals program, or DACA, which President Barack Obama set up in 2012. If Mr. Tanaka left the country, he would risk losing those protections. He has not seen his parents since they returned to the Philippines.

The provisions previously rejected by the parliamentarian would provide him stability while the legal immigration proposal would improve his parents’ chances of obtaining a permanent place in the United States.

A senior Democratic aide familiar with the parliamentarian’s thinking cautioned that she had not greenlit any provision for inclusion in the reconciliation package. That includes visa recapture provisions that Republicans embraced when they controlled the Senate in 2005, but have grown resistant to in the current political climate.

That year, Senator John Cornyn, Republican of Texas, praised recapturing unused visas for high-skilled workers in a reconciliation package as a way to “keep jobs here in America, rather than export them to places like India and China.”

But an aide to Mr. Cornyn said the senator would support a stand-alone policy bill but would not support such a provision as part of the reconciliation package, which contains many other provisions he opposes.

Dr. Singh said his frustration lies with leaders across the political spectrum who had failed for years to enact lasting changes to the immigration system.

He grew especially concerned about keeping his family in the United States as he began treating patients for the coronavirus, realizing that if he got sick or lost his job, they would most likely lose the protection that hinges on his work visa.

He recently received an email from one of his former patients asking if he would return to the clinic soon.

“Unless I see something that gives me stability,” he said he wrote back, “I don’t think I’ll ever be able to come back.”