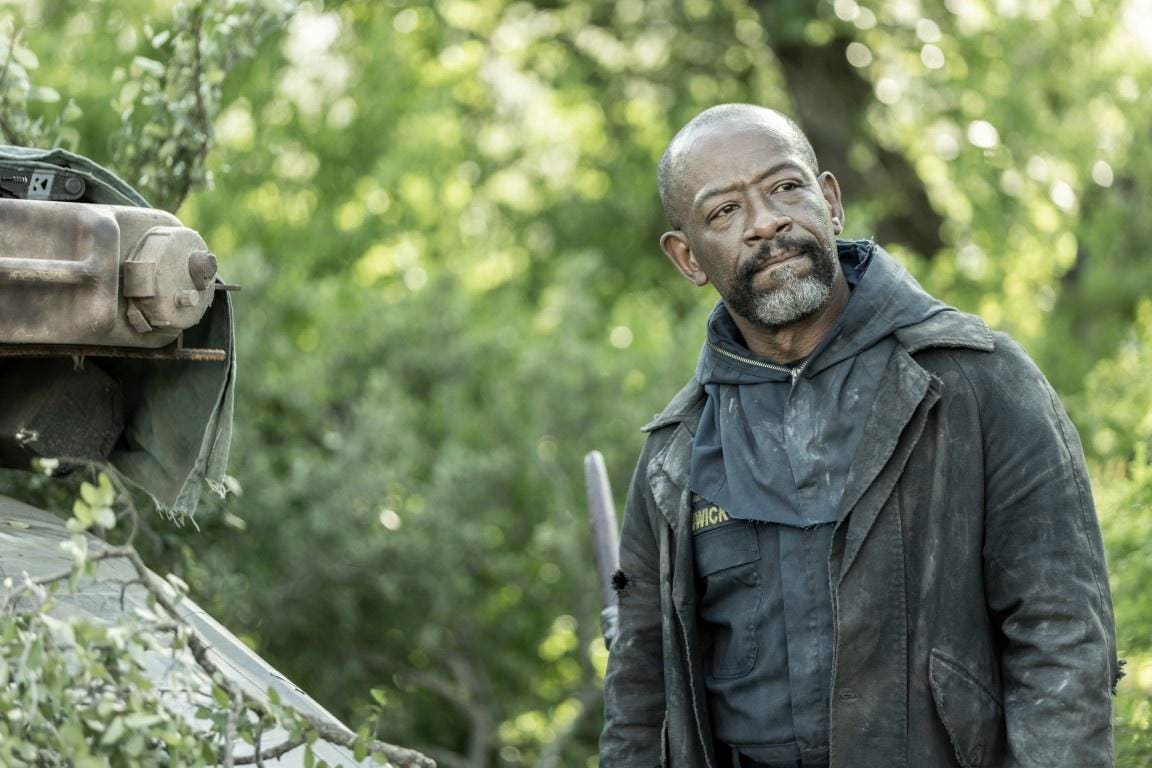 I think you should be more like Morgan Jones.

Morgan Jones is always trying to fix things. This is his purpose now that he’s become the central protagonist in Fear The Walking Dead.

Morgan wants to help people, to heal what’s broken, to rebuild what has been destroyed, and to find what’s lost. He is a hero, but for all his heroics he’s still absolutely, entirely and relentlessly insufferable.

That is the best word I can think of to describe Morgan Jones. Insufferable. We’re supposed to like him, to root for him, but his niceness and nobility just make him less likable somehow. His constant, cloying sincerity feels forced. I just want him to stop trying so hard.

On the other hand, I want you, AMC, to start trying harder. I want the showrunners, writers and producers of all three Walking Dead shows—the main show, Fear and World Beyond—to act more like Morgan and start taking these shows’ many problems seriously. To fix these problems and restore The Walking Dead, and especially Fear The Walking Dead, to its former glory.

This is the last chance for the main show, and the best thing you can probably do about Fear is a mercy kill at this point, but this franchise is far from over. When you’re planning how to make future Walking Dead content, take it seriously. Hire better writers and showrunners and hold them accountable. You can only give so many chances, after all.

I can’t believe how far this franchise has fallen, and there’s simply no way you can blame all of its viewership woes on cable-cutting, or people watching early on AMC+.

The enthusiasm for The Walking Dead has all but dried up. To some degree, that just can’t be helped. The main show is in its 11th—and final—season, but it’s off to a horrible start. The first eight episodes were a dreary slog and the only really fun episode was ridiculous (though I’ll take exciting implausible horror movie stuff over boring and pointless episodes any day).

Either way, not a good sign for the show’s final act.

Fear The Walking Dead is practically a spoof of itself at this point, a garish parody of what it once was. Take Victor Strand. He has been propped up as the show’s villain this season. Always a knave, the roguish survivor has gone from self-centered acts of betrayal, to out-and-out villainy.

It’s an almost comical character shift, handled clumsily by the show’s bumbling showrunners who have succeeded in just one thing since they took over in Season 4: To drive Fear The Walking Dead into the ground and crush all the life and energy from its bones.

In the latest episode, Strand hires an assassin to carry out a truly despicable act for almost no reason whatsoever. Well, to prove a point to two other characters and former allies. It’s one of the worst, most vicious murders in this show’s seven-season run and something that the Victor Strand we all know would never do in a million years.

Strand is not a good man—he’s selfish and always looks out for number one—but he’s not the kind of guy who would hire assassins to kill innocent people including children. Strand is not a child killer. Except that now he is, because the writers and showrunners have so little respect for these characters and so little understanding of them, it’s making the show itself as insufferable to watch as Morgan Jones himself.

(And I wonder if Alycia Debnam-Carey is even on the show anymore, she hasn’t shown up once this entire season yet).

How AMC has allowed this travesty to continue for four seasons is beyond me. I am a harsh critic of Fear The Walking Dead but I’m hardly alone in my critique. Whatever Fear is now, it’s not the same show as it was through Season 3. The cast is almost entirely different. Realistic characters and conflicts have been replaced by bad cartoon drama, nuclear explosions, beer-bottle-shaped hot-air balloons and ethanol tankers spilling out into the dirt.

I’m behind on World Beyond, but that show has stumbled since it left the gate, an awkward attempt at reaching younger audiences that’s mostly resulted in unlikable characters and lots of slow, padded episodes and melodrama, only remaining to stay afloat on the promise of more and more info about the CRM and clues to the fate of Rick Grimes.

My larger point, however, is simply that you, AMC, should start taking these issues seriously. There is a problem in the quality control department that needs to be addressed. Mostly, we’re dealing with fine actors, perfectly good special effects (the zombies are consistently great) and good, if often uneven, cinematography and editing.

The problems mostly all stem from bad writing and lackluster storytelling (mostly). The story of Morgan and the Morganites over the past four seasons, as they run up against one crappy, uninspiring villain after another, is just not very interesting or exciting. Even all the show’s shenanigans, no matter how over-the-top, fail to impress.

The Walking Dead deserves a strong final season. With just 16 episodes left, the writers and producers on that show need to stop padding everything out with filler and start leading us toward the end with guts. Characters need to start dying. Things need to happen that matter. There need to be higher stakes, more tension. We need to be worried about what’s coming, about who might die.

And you need to stop spoiling its own show with announcements about who’s leaving, or who’s getting their own spin-off show after this one is done. Telling a good story also requires some patience. Let people be surprised again!

The Walking Dead is a valuable franchise with a ton of potential for great stories but it’s being squandered. Viewers don’t see it as a premiere television show anymore because it’s not. What was once the go-to TV experience with a serious portrayal of life in a grimly realistic zombie apocalypse is now just a pale shadow of its former self. The main show is hit-or-miss even after its post-Savior War recovery. Fear is in constant, baffling decline.

It’s time to take these problems seriously, even if that’s just a financial consideration at this point. There is money to be made and money to be lost, and somewhere in all of this a legacy to be considered as well.

What will the legacy of The Walking Dead be? Something perhaps not quite so galling as Game Of Thrones, which fell even more spectacularly from grace. The Walking Dead shows have instead shuffled their way into obscurity and cultural irrelevance. That takes the sting out of it a bit, but it’s no less depressing.

Imagine what could have been.

I’ve made a video about this also which you can watch below: