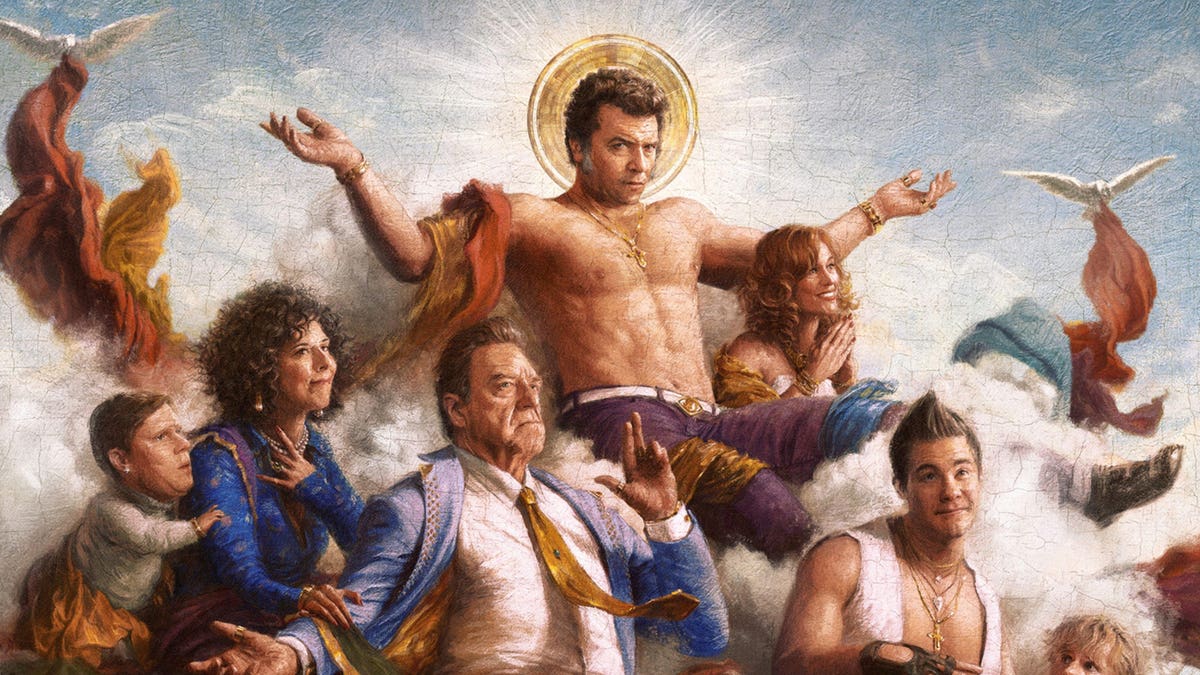 When the first season of The Righteous Gemstones landed on HBO’s platforms with around 844,000 viewers, the cable network and streamer knew they had a hit on their hands.

Everyone involved in the show about a family of corrupt evangelists had their prayers answered when a second season, which kicks off on Sunday, January 9, 2022, was announced almost right away. A third got the go-ahead in October 2021.

Among the returning cast are the multiple creative hat-wearing creator Danny McBride as Jesse Gemstone and Cassidy Freeman as his wife, Amber. I caught up with the pair to talk about how actual world events can throw a spanner in the narrative works, why Christians love the show and how a throwaway improvised comment at 4 am can change the show’s path.

Simon Thompson: The first season of The Righteous Gemstones went down extremely well with audiences and critics and continues to build an audience. Did the runaway success take you by surprise?

Danny McBride: All the shows I made before, like Eastbound and Down and Vice Principals, there’s a big difference between when it comes out and once it’s been around for a while and people get to it. Eventually, a show finds its audience, so we just made what we thought would be fun and good. It was exciting to see people connect with it and dig it. It’s awesome. There was always a hope we would have more seasons and be able to tell more of the story, so it was thrilling to get the opportunity to come back and do it again.

Thompson: When did the call come?

Cassidy Freeman: It was partway through the first season. I don’t think it had finished airing when we got the go-ahead to do more, but that was a boost.

Thompson: That says a lot about the confidence in the show. Talking of confidence, Gemstones doesn’t shy away from things and manages to make the outrageous into art. For instance, the discussion of self-pleasure in the first episode uses almost Shakespearean wordplay.

Thompson: The Gemstone family dinners are terrific set pieces, and I love where everyone puts each other on blast. Was that one of the situations where you did allow riffing?

McBride: We definitely riff on the dinner table scenes. You have ten or so characters who are all very distinct and have voices, but maybe only five of them talk on the page. When we filmed those scenes, you could see each actor start to feel where the character would slide in a little slight, and they would let go. Those are some of the most fun scenes to work on.

Freeman: Those are the scenes where we find useful things most often. Sometimes they find a whole storyline that you never even knew would happen just out of one nugget that someone comes up with. Every single one of those scenes is a joy. They take forever to film because when you’re shooting around a table, you have so many different perspectives to get. When you say the same thing 500 times, it loses meaning. The ability to be in the moment and go for it with that freedom keeps it fresh and keeps it fun.

Thompson: John Goodman is outstanding at many things, but he’s not very good at hiding a laugh. Is he usually the first one to go?

McBride: (Laughs) He giggles his little ass off. I feel like the church lunch scenes are probably the hardest to keep through. Luckily we’re shooting all day long, but almost every time we shot one, in at least a few of the takes, I’m just crying because of something that someone has said. We all have our storylines when we’re shooting the show, and you can go for weeks without seeing some of these cast members because you’re shooting on different days. Those lunch scenes are always just so much fun because everybody’s there. There is a lot of camaraderie on the set. So, you know, you definitely try to f**k with people when it’s their coverage (Laughs).

Freeman: Sometimes it’s four in the morning when we’re doing that stuff, and just because of that, my brain is working differently, and I’m saying things in a way that I would never usually say.

Thompson: Many people might assume that some Christians would push back on the show, but do many people of faith come to you and thank you for pointing out the hypocrisy in how some claim to practice religion and use it to make money?

McBride: That’s been my experience with it. I do feel that. The Righteous Gemstones isn’t a representation of what most people’s relationship with Christ or the church is like; this is such an American thing that’s so blown out. The idea of a preacher who sees himself as a rock star, that sees themselves as bigger than the message that they’re delivering, I think, is something that would be offensive to anybody of faith. A false prophet is a concept that nobody we talk to is down with. They like that we’re taking shots at these particular sorts of individuals.

Thompson: Many comedy shows that tackle subjects and issues like politics or religion have problems these days when the reality turns out to be so bizarre that it’s almost impossible to lampoon.

McBride: (Laughs) That is precisely the thought process I’ve experienced on more than one occasion. Whenever I see one of these guys and the headlines around them, I’m like, ‘S**t. Please don’t take away from our show. Keep your behavior in check. We don’t want people to think we’re copying you.’ It was fun to see that news story about the money in the walls because, in the first episode of the show, that’s basically where Judy keeps all her stolen money. It’s in an air duct. Maybe that person got the idea from Gemstones? Who knows? It’s like the chicken or the egg question.

Thompson: Do you think the Gemstones know how awful they are?

McBride: I don’t think they do. I think they ultimately feel like they are doing the right thing and that even the f**ked up stuff they do is somehow working towards what they believe is right. They give themselves a pass. That’s kind of what we’re tracking with this family. They built this empire on religion, and somewhere along the line, the quest for growth and expansion has eclipsed what the whole thing is supposed to be about. Are they going to snap out of it, or is this who they are?

Freeman: I think they also have a pretty clear sense of right and wrong. In season one, Jesse, Danny’s character, knows what he did wasn’t right, and he’s trying to hide it. I think what they don’t see is the hypocrisy of what they’re doing. They have a shallow sense of right versus wrong and try and make that as right as they can.

Thompson: So what could you do this season that you weren’t able to do with that first run?

McBride: I don’t know. I treat all these seasons as their own individual experience. I hate watching a television show where the season finale is a cliffhanger and is always about the promise of what’s next. If I commit to five hours of a television series, I want to have it end. In some regards, I approach both of these seasons as if they’re a complete story on their own. You never really know if you’re going to be able to come back in and do it again, so I want people to feel like it’s a fully-realized vision each season in case we don’t come back. I think, with everyone having more of an understanding of their characters, it’s fun to start being able to dissect those more now and push them into more interesting situations. As a writer, I could do more as the rules have been set for you to start breaking them and bending them.

Freeman: We’re also allowed to have more characters play, too. You couldn’t introduce all those characters in season one. It would be too much.

Thompson: It’s great to see Eric Roberts join this season. This is season two, and we know there is another coming. Like the Trinity, would there be that third season and then the Gemstones rising again with a feature movie?

McBride: (Laughs) I lie the way you phrase that. You should come and join our writers’ room. I think there are some interesting concepts there for sure. I have a general idea of where I want the show to go. Still, part of what’s so much fun about creating a show like this with so many different creative people is to capture the alchemy, being in the moment and willing to chase whatever the best idea is. I approached the season’s writing very much in the same way we approached shooting the show. You have a general plan or idea, but the last word is what an actor could bring to the moment that might influence an entire storyline next season. When you surround and populate the world with so many people who are so talented, funny, and unique, it’s about paying attention to what they’re responding to and what they’re bringing and trying to make sure that you can capitalize on it all.

The Righteous Gemstones returns to HBO and HBO Max on Sunday, January 9, 2022.