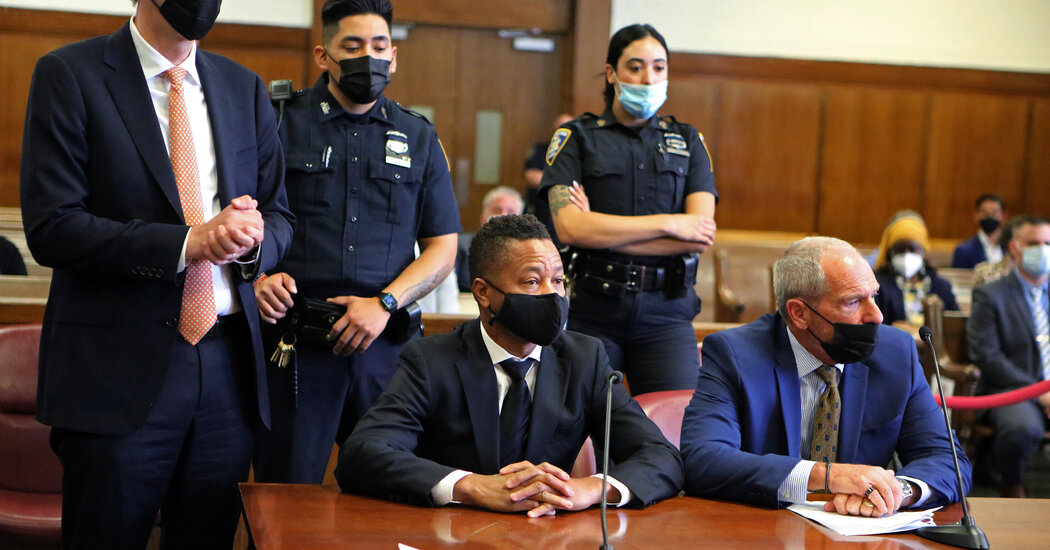 The actor Cuba Gooding Jr., who had been accused by more than 20 women of groping or forcibly kissing them in encounters that dated back more than two decades, pleaded guilty in Manhattan on Wednesday to one count of forcible touching.

The count, a misdemeanor, charged that he had forcibly kissed a woman at a nightclub in Manhattan in 2018.

Under terms of the plea, Mr. Gooding must continue for six more months in alcohol and behavior modification treatment that he has been undergoing since 2019, and he must have no new arrests, the Manhattan district attorney’s office said.

If Mr. Gooding does not comply with the terms of his deal, the misdemeanor guilty plea would stand and he could face up to one year in jail.

In a hearing on Wednesday in State Supreme Court, Justice Curtis Farber asked Mr. Gooding if the charge to which he was pleading guilty was true.

“Yes, your honor,” Mr. Gooding said. “I kissed the waitress on her lips.”

“I apologize for ever making anybody feel inappropriately touched,” Mr. Gooding said in court, adding that he was a “celebrity” and did not want people he met to “feel slighted.”

Mr. Gooding had faced a criminal trial on charges of unwanted sexual touching of three women in Manhattan restaurants and nightclubs in 2018 and 2019. The Manhattan district attorney’s office had asked a judge to admit as witnesses 19 other women who it said had come forward to accuse Mr. Gooding of such conduct.

Mr. Gooding’s “prior acts demonstrate that his contacts with their intimate parts are intentional, not accidental, and that he is not mistaken about their lack of consent,” the district attorney’s office wrote in a court filing in October 2019.

The judge initially ruled that two of the additional accusers could testify against Mr. Gooding at trial, which would have allowed prosecutors to argue in court that Mr. Gooding had exhibited similar conduct for years.

But an assistant district attorney, Coleen Balbert, revealed in court on Wednesday that Justice Farber later reversed this ruling, meaning that the additional accusers’ testimony could not be introduced at trial, something that previously had not been made public, she noted.

Asked about any such later ruling by the judge, a court spokesman, Lucian Chalfen, said, “In the pendency of any criminal case, there are always discussions about what may or may not be introduced.” Mr. Chalfen said Justice Farber’s later ruling still would have allowed the district attorney’s office to call the additional accusers to rebut any defense testimony in the trial.

Mr. Gooding was originally charged in connection with an encounter on the night of June 9, 2019, during a party at the Magic Hour Rooftop Bar, an expensive lounge at the Moxy NYC Times Square hotel in Manhattan. The accuser said that Mr. Gooding placed his hand on her breast without her consent and squeezed, according to a criminal complaint.

He was later charged with pinching a woman’s bottom at a Manhattan nightclub in October 2018 and with an additional incident at Lavo, an Italian restaurant on East 58th Street, in September 2018 — the episode to which he pleaded guilty.

In court, Mr. Gooding’s lawyer, Frank Rothman, said his client was also prepared to apologize to the women in the two other incidents.

One of those accusers — the woman in the incident at the hotel in 2019 — addressed the court on Wednesday.

“I won’t lie,” the woman, who identified herself as Kelsey Harbert, said. “I’m very disappointed that we are here today discussing a plea deal.”

Ms. Harbert said that she wanted to talk about what had happened to her and also to explore some broader issues, which drew an objection from Mr. Rothman, who said she should not be “making a statement for the rest of society.”

Ms. Harbert, saying she would limit her comments to her own experience, told the court that she had been “super excited” to see Mr. Gooding and then encounter him while she was out one night with friends. Her excitement turned to dismay, however, when she felt his hand on her breast, she said.

“I was mortified,” she said. “My body was being placed under the dominion of someone else without my consent.”

Ms. Harbert said it was “very devastating” to her that Mr. Gooding would have the chance to “move on” after six months, while she has experienced continuing feelings of trauma and violation as a result of her contact with him.

After Ms. Harbert completed her statement, the defense lawyer, Mr. Rothman, spoke again, saying he had watched a video recording depicting the events at the hotel. “What she said happened here for the last 20 minutes is a product of her imagination in large part,” Mr. Rothman said.

After court, Mr. Rothman said in a phone interview, “This case should have been resolved years ago.” He said that he had met with the new district attorney, Alvin L. Bragg, after he took office in January, who “took a harder and more in-depth look at the pros and cons of the prosecution.”

“We reached an agreement that all sides could live with,” Mr. Rothman said. “It’s fair and appropriate under all of the circumstances.”

Mr. Gooding, a Bronx native, had his first major success playing the lead role in the 1991 film “Boyz n the Hood,” and he won an Academy Award in 1997 for his supporting role in “Jerry Maguire.” He played O.J. Simpson in the 2016 television series “The People v. O.J. Simpson: American Crime Story.”