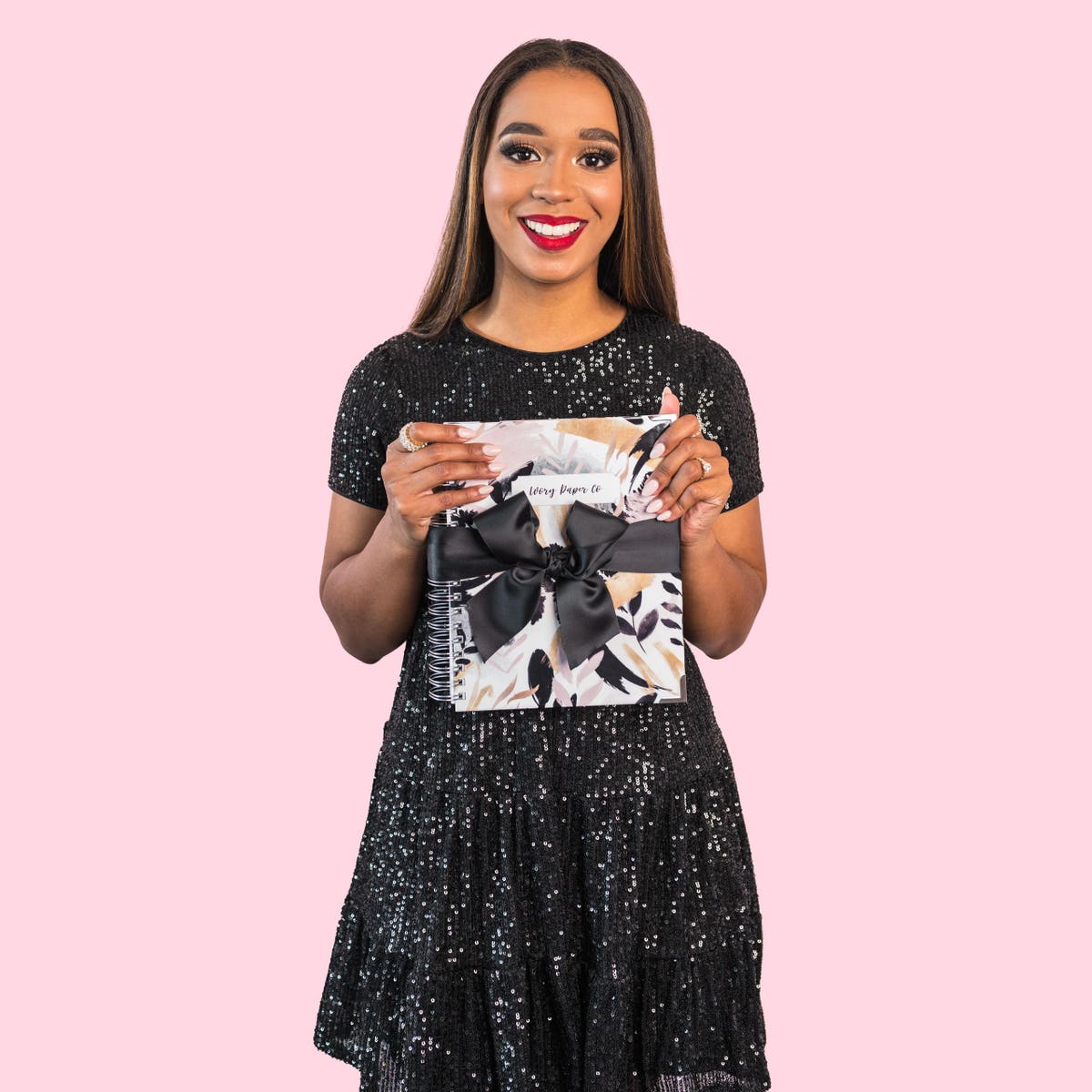 It was 2019, and Alitzah Stinson had had enough of being a social media influencer. She’d been successful – but decided to take a step into the real world by making customized planners.

Ivory Paper Co. not much more than a thought at the time. Then her husband lost his job, and she and her husband decided to pour everything they had into the company.

“Not many people know what it’s like to literally look into your bank account to see if you can treat yourself to Dunkin once a week.”

Two years later, the company has booked more than $3 million in revenue, after its planners unexpectedly took off. It’s profitable, Stinson said, notwithstanding a rash of delays early in 2021 that turned into a social media and legal storm. The company survived as she dug into the well of social capital she’d accumulated. Among those she’s built relationshiops with is Tonia Misvaer, CEO of Erin Condren.

“I was almost afraid of other entrepreneurs. Those stories we’re told, that … you have to figure it out on your own, is not what I have found,” Stinson said. “The women who are working in this space make it a sharing and kind environment. Being able to have those conversations is invaluable.”

Stinson is one of the of the millions of people launching and growing businesses during the pandemic. Though the data isn’t perfect, the majority are likely women and people of color, based on the trends of recent years and the data on who is leaving the workforce. The 12.5 million white male business owners comprise about 41% of the 30.5 million total owners of small businesses in America. There are about 11.6 million women-owned businesses (about 65% of them are white-woman owned) and 6.5 million businesses are owned by men of color, based on Census Bureau statistics.

But this is not an easy time to be launching a company. And the New Builders whose businesses are being shaped by the pandemic are demonstrating a different kind of grit. Not only are they learning to operate lean, they’re bringing a host of soft-skills to the table. Women and people of color have a much harder time raising capital from venture investors and a somewhat harder time obtaining back loans. In a part of the economy where capital is in short supply, soft skills and the ability to collaborate rise to the fore, as Seth Levine and I discuss in a free course developed around The New Builders, with the help of entrepreneurship professor John Lynn.

The entrepreneurial archetype of the past was the bootstrapper or the lone cowboy, tough and a bit ruthless; but today’s entrepreneurs are deeply and transparently connected to their families, employees and communities. Rather than the bootstrapper, their archetype is more the servant-leader: No less tough, no less gritty, but working more in the interests of their communities and missions.

The soft skills aren’t particularly easy, by the way, despite the adjective. When revenues are dwindling, it might be easier to go by the spreadsheet and cut staff to the bone. Today’s entrepreneurs often make different choices, and strike a balance, doing things like dipping into personal savings to extend payrolls.

This month, the U.S. Census Bureau released data showing that entrepreneurship surged for the second year in a row last year. Some 5.4 million business applications were filed, 1 million more than in 2020, itself a record. Meanwhile, JPMorgan Chase reported that the businesses that survived the pandemic are looking to the future with surprising optimism. Some 61% of 1,000 business leaders surveyed by JPMorgan Chase Insights say they expect profits to increase in 2022. And, 71% said they’re optimistic about their company and industry.

Here are three soft-skills lessons from the New Builders about surviving the pandemic, or any tough times.

What comes around, goes around. Fayetteville restaurant owners, Nick and Carrie Wright, supported their community for decades, signing donation checks and collecting cash for Christmas gifts. The relationships run deep; and during the labor shortage, they’ve paid off, as regulars are working volunteer shifts at Herman’s Ribhouse to keep the restaurant open. 59-year-old Susan Bendure has been volunteering since the fall. The couple helped out her mom before she died, and visited her when she was in the hospital and rehab, Bendure said.  “Honestly, I would do anything in the world for Nick and Carrie, and I really do enjoy it,” she told Times of Entrepreneurship.

Recognize social capital can be just as valuable as money. To develop a shopping center in a redlined part of Oklahoma City, two men – a Black developer named Sandino Thompson and white developer named Jonathan Dodson – came together to line up tenants and come up with an innovative financial structure to give them ownership in the building. That means the tenants won’t be as vulnerable to gentrification.

Their friendship didn’t develop overnight. “One day, I’m going to like being your friend,” Thompson told Dodson at some point, probably, he said, after one of Dodson’s earnest and naïve (Dodson’s word) questions about racial dynamics.

When the project was ready, a woman banker, Jill Castilla, loaned them money. But the deal never would have happened without the relationship the two men had built.

Mission and profits aren’t a tradeoff, they’re a balance. Traditional entrepreneurs tend to segment mission as separate from their balance sheets; if they do good in the world, it’ll be after they succeed financially. Today’s entrepreneurs are weaving it in from the beginning. One of Stinson’s values was manufacturing in the United States. That meant paying more for paper, $46 a box. But when costs rose to more than $60 a box, she could more easily adjust, in contrast to companies that were sourcing to China for $4.50 a box and had to shift manufacturing to the United States.

It’s not about optics. It’s about sincerity and transparency. Carmen Portillo, one of the entrepreneurs featured in my book The New Builders, was the first black chocolatier in Arkansas. She’s always been open about the ups and downs of her Cocoa Belle, including about the mistakes that led her to close her first physical location in the recession of 2008-09.

When Covid-19 hit, she lost a shareholders meeting, a wedding and hotel opening in the same week. But found some of her biggest support in the first year of the pandemic came from people who wanted to help a Black-owned business succeed.

Similarly, when production delays led to a storm of customer complaints about Ivory Paper Co., the Attorney General of Ohio got involved, working with Stinson to develop a plan to refund and and delivery schedule. The company changed its processes and kept hiring. “We learned a lot through that challenge,” she said, noting that Ivory Paper Co is on track to meet those schedules. In 2021, the company employed 62 people.

“As the owner and the CEO of this company, it’s my job to do a better job anticipating these spikes,” Stinson told local media at the time. “And that’s really difficult to do, not only in a pandemic, but still, that’s my job and that’s where we dropped the ball here. That is a failure on my part, that I take so seriously, and I’m sorry. There is no excuse for that. These are lessons that we’ve learned, and I am hopeful that I can take all that I’ve learned from this crazy period of time and apply that to the business moving forward.”