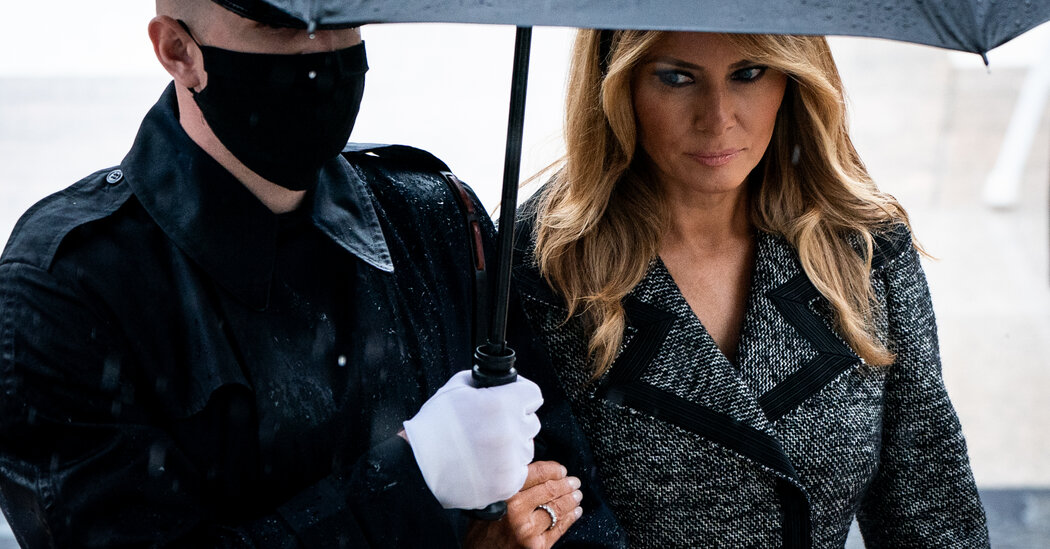 WASHINGTON — An Oklahoma school that specializes in teaching advanced computer science skills has rejected an offered donation by Melania Trump, who said on Friday that “politics got in the way of my mission to support children.”

Mrs. Trump disclosed the clash with the school in a statement defending her charitable fund-raising efforts since she left the White House, which she has said are focused on supporting foster children.

Mrs. Trump did not name the school that she said rejected her donation, noting only that it was “a computer science school founded in Silicon Valley with a campus in Oklahoma.”

That fits the description of an organization known as Holberton School, a San Francisco-based education company that has more than 30 schools around the world that specialize in computer science training as an alternative to traditional college for students who want to become software engineers. It opened a location in Tulsa, Okla., in 2020.

Julien Barbier, the chief executive of Holberton, confirmed on Friday that Mrs. Trump had tried to donate money to the Tulsa school.

“We were approached about a scholarship by her team but never reached an agreement on the logistics of the scholarship,” he said, declining to discuss the matter further.

Mrs. Trump said that she had offered to make the donation anonymously, with the money intended to support scholarships. She said she had signed an agreement detailing the planned contribution when the school moved to reject it, which she said was part of an effort to “cancel me.”

“It was made clear to me that the school’s board of directors organized a politically motivated decision,” Mrs. Trump said in her statement, which was posted on her website on Friday. “Obviously, I was disappointed but not surprised. This is not the first time where politics got in the way of my mission to support children.”

She added that it was at least the second time her efforts to support a charitable cause had been rejected, asserting that a “corporate partner refused an opportunity to further our shared philanthropic goals surrounding my visit to Africa,” which took place in 2018. She provided no other details.

Since December, Mrs. Trump has accelerated her efforts to raise or make money — for herself and for charitable causes — holding an online auction last month to sell a white hat she had worn at the White House during a visit by the French president in 2018, as part of what she called the Head of State Collection.

She also recently announced plans to host what she called an “exclusive high tea” that she is calling Tulips & Topiaries, selling tickets for as much as $50,000 for “V.I.P. table sponsors.” The money raised from the event, scheduled to be held in Naples, Fla., in April, would be at least partly donated to a cause that supports children in or emerging from foster care, Mrs. Trump has said.

The money, she told The New York Times in a statement this month, would be used “to provide children within the foster community the ability to secure entry-level jobs within the technology sector,” resembling the mission of the Holberton School.

But the planned event in Florida has drawn questions from officials who are investigating whether Mrs. Trump complied with state law. Florida requires anyone soliciting charitable donations to register with the state, and officials there could not find a registration filed on behalf of Mrs. Trump or the programs she said she was raising money for, called Be Best and Fostering the Future.

In the statement on Friday, Mrs. Trump said that she did not intend to create her own formal nonprofit organization, registered with Florida or the federal government.

Instead, she said, the money raised at the April event would go to Gen Justice, an existing nonprofit also known as Generation Justice that uses legal action to try to improve the foster care system in the United States. Mrs. Trump also said she was working with a conservative nonprofit called the Bradley Impact Fund that had selected the foster-care related charities she intended to support. Both organizations are registered in Florida to raise charitable donations.

A spokeswoman for the Florida Department of Agriculture and Consumer Services, which oversees charitable giving in the state, declined to comment on Friday about the inquiry.

“With the investigation still ongoing, we are not able to comment further at this time,” Erin M. Moffet, the agency spokeswoman, said in an email on Friday.

Mrs. Trump, in a series of public statements, said that she had followed all the state rules.

“The media has created a narrative whereby I am trying to act in an illegal or unethical manner,” her statement on Friday said. “That portrayal is simply untrue and adversely affects the children I hope to support. Those who attack my initiatives and create the appearance of impropriety are quite literally dream killers. They have canceled the hopes and dreams of children by trying to cancel me.”

A Guide to Cryptocurrency

A glossary. Cryptocurrencies have gone from a curiosity to a viable investment, making them almost impossible to ignore. If you are struggling with the terminology, let us help:

Bitcoin. A Bitcoin is a digital token that can be sent electronically from one user to another, anywhere in the world. Bitcoin is also the name of the payment network on which this form of digital currency is stored and moved.

Blockchain. A blockchain is a database maintained communally, that reliably stores digital information. The original blockchain was the database on which all Bitcoin transactions were stored, but non-currency-based companies and governments are also trying to use blockchain technology to store their data.

Coinbase. The first major cryptocurrency company to list its shares on a U.S. stock exchange, Coinbase is a platform that allows people and companies to buy and sell various digital currencies, including Bitcoin, for a transaction fee.

Crypto finance. The development of cryptocurrencies spawned a parallel universe of alternative financial services, known as Decentralized Finance, or DeFi, allowing crypto businesses to move into traditional banking territory, including lending and borrowing.

Mrs. Trump’s moneymaking efforts have only intensified in recent weeks, as she announced a partnership with Parler, the conservative social media site, to use the platform to promote her online sales.

She disclosed on Parler this week a plan to sell what she is calling the POTUS TRUMP NFT Collection, which features virtual artwork known as a nonfungible token, or NFT, on USAmemorabilia.com, a website she is creating.

A total of 10,000 NFTs will be sold for $50 apiece or possibly more, and will feature “iconic moments from President Trump’s administration, such as the Fourth of July visit to Mount Rushmore and Christmas at the White House.” The sales will take place with cryptocurrency, Mrs. Trump said, as with the earlier auction.

She did not indicate where the images from the NFTs would come from, but a former aide questioned in a tweet whether it was appropriate to sell photographs of White House events.

“Trump selling the PEOPLE’s House archives?!!” wrote Stephanie Winston Wolkoff, a former adviser to Mrs. Trump, who had a falling out with the family after a dispute over spending during Mr. Trump’s inauguration. “Is this legal?”

Asked if the NFT images Mrs. Trump will be selling are based on photographs taken by federal government employees, Mrs. Trump’s office said in a statement that “all images are copyright-free and fall within the purview of the public domain.” That is an apparent reference to a longstanding federal policy that government “creative works” are not protected by copyright law, suggesting she believes that she is entitled to use and profit from them.

Her statement made no mention of whether any of the money raised from the sales would support her charitable efforts or simply be collected by Mrs. Trump and her business partners. Mrs. Trump also indicated that images of the virtual artwork she is selling — with names like Air Force One Platinum, First Lady Platinum and Mount Rushmore Platinum — would not be publicly disclosed before they were sold.

“Collectors will enjoy an element of surprise, as the artwork of each NFT is revealed only after purchase,” the announcement said. “Of course, collectors can make multiple purchases to own the entire POTUS Trump Collection.”