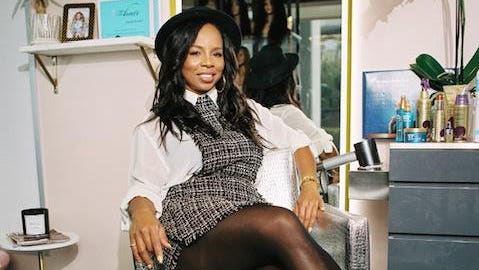 After 28 years of being in the celebrity hair world, Kiyah Wright is still making moves on some of the biggest stars in Hollywood. Whether she’s styling Jennifer Hudson or getting Usher “Vegas ready” for his residence, Wright continues to make her presence known with each look she creates—and has become a trendsetter in the industry.

Since setting out to become the “Paul Mitchell of Hair Texture” 28 years ago, Wright has won two Daytime Emmys and a Golden Scissors Award. She started out doing hair when she was a teenager in her mother’s basement sneaking people in and out. Wright knew she wanted to do hair when she watched Anita Baker and Madonna on television thanking their hair stylists for how beautiful they look and how influential their hair and makeup artists were to their careers.

“I thought wow this is great, I can do hair and get thanked by celebrities,” Wright says. “That was in my consciousness and in my mind when I was younger.”

Years later, Wright didn’t realize how much the role would be reversed when she ended up winning a Daytime Emmy for her work on The Tyra Banks Show and she would be the one on stage thanking people for helping her along the way.

“I guess I didn’t see it as the big deal it was because, you know, people growing up make you always feel like a doctor or a lawyer was more of a career than being a hairstylist,” says Wright. “When I won my Emmy, I felt really official.”

When the pandemic hit, it also affected the hair styling industry. Being a hairstylist is pretty intimate, so Wright had to temporarily set down her styling tools.

“I was able to meet a few people at home but they were very select,” says Wright. “It really affected the celebrity world terribly. We couldn’t do hair at all so it was a bad ten months.”

Wright has been a brand ambassador for Procter & Gamble for over 13 years. During the lockdown, she worked closely with the company as an influencer and helping with virtual consultations. While trying to stay connected to their audiences, Wright became more of an on-camera personality for Procter and Gamble.

“Just sharing with customers how to make themselves over at home and doing your own hair at home, how to do quick/easy tips on how to get the look at home, that became more of my focus. Buying products, what to use, what’s friendly for yourself to do at home, how to condition, and treat your own hair. That’s what I would get into”, says Wright.

Being a part of some iconic careers has shaped Wright’s professional journey. She has been styling Jennifer Hudson since Dreamgirls and worked with Tyra Banks for 12 years. She even styled Madame Tussaud’s Wax Museum for her 40th birthday this year.

“Jennifer is on her way to getting an EAGOT. Tyra’s iconic with transiting from model to television, being on camera and producing. Kind of being there with all these types of women has just shaped and aspired my career,” says Wright.

Even though she has worked with a lot of talent over the years, she still wants to work with other top tier talents like Rihanna and Doja Cat. Wright is excited for her future ahead as she prepares for her book, The Business of Beauty and creating a platform for young entrepreneurs to learn how to build their own brand.

“That’s really what I always wanted where all the entrepreneurs can make money, understand their money and their income. What to do with it next and how to run their own brand,” Wright says.