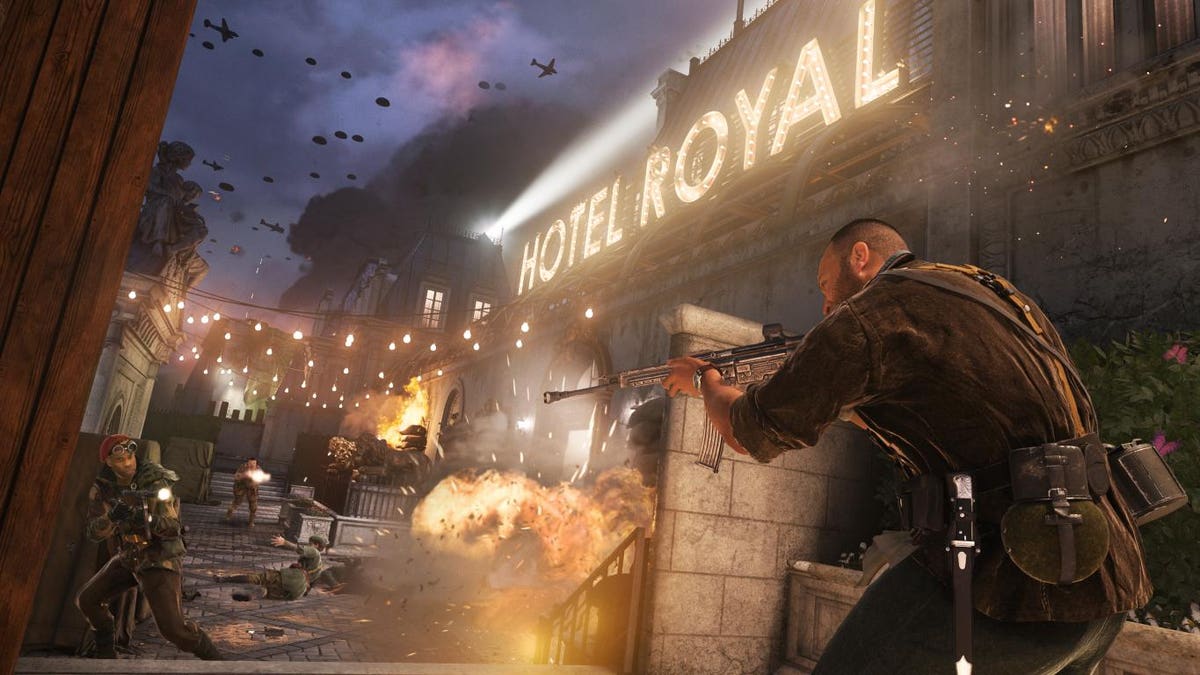 Last week, I spent a little over two hours playing several of Call Of Duty: Vanguard’s upcoming multiplayer maps with other members of the press and influencers/streamers/pros some of whom were much, much better than me—though I think I held my own at times.

We played several different modes on four different maps which I’ll go into more detail about below. First, let’s talk about the modes, gunplay and overall feel of the upcoming WW2 shooter from Sledgehammer Games. Since I didn’t have access to all 16 MP maps or all modes and wasn’t able to try out all the different guns, these impressions are obviously limited.

Sledgehammer and Activision had us play several different modes. Some you’re probably familiar with like Domination (capture and hold three points) and Kill Confirmed (TDM with dog-tags you have to collect). The only new mode we played was Patrol, which is basically Hardpoint but the point moves constantly across the map on what’s essentially an invisible track.

Patrol mode is a fun new twist that I really did enjoy. You can never hunker down and defend a stationary point since it’s always moving, so it’s a much more active game mode than Hardpoint. Enemies can come at you from all sides and you can get the jump on defenders. It’s all very chaotic.

I played these modes in 6v6 and big team mode. Vanguard has a slightly confusing new “combat pacing” system that’s really just a fancy way of determining what size teams you want on any given map. Combat Pacing goes something like this:

We played Tactical and Blitz during the demo session. Tactical is your classic 6v6 gameplay which is my preference when it comes to Call of Duty games (unless we’re talking about special modes like Gunfight or War Mode which I like even more).

6v6 works pretty well on the smaller maps, but at least one during the demo session (Red Star) was too big for such a small player count. Later, we played it on Blitz mode and that felt too chaotic. Maybe “Assault” will be just right. We shall see.

Gunplay felt pretty decent. The game is built on the same engine as Modern Warfare so there are a lot of similarities with things like double-sprint and just the way the game feels overall. It might be a bit faster and a bit less grounded—Modern Warfare has a clunky realism to it that’s basically the opposite of Cold War’s fast arcade style. I’d say Vanguard falls somewhere in the middle.

The guns, of course, are quite different. These are all WW2-themed guns, though the basics all still apply. You have your sniper rifles, your super-fast revolving shotgun, your SMGs and Assault Rifles, and the M1 Garand as a Tactical Rifle (at least that was the only one I recall seeing during the demo). The M1 Garand is a classic rifle but I didn’t use it much, sticking mainly with Assault Rifles and devoting one entire match to sniping.

The other new addition to multiplayer is destructible walls. These are very obvious as they’re essentially just boards instead of actual walls. You can fire or slide or melee these to pieces, opening up new routes or taking down some enemies who mistakenly think they have cover. It’s basically the barest of bare minimums when it comes to destructible environments and I think it adds very little to the game and can in fact be somewhat distracting—though not as bad as in Champion Hill mode where spawn kills were a direct result.

Overall, I had fun with the online multiplayer session but I’m not sold on the experience as a whole yet. Partly this is because I’m used to Black Ops Cold War at this point and nothing in Vanguard felt as good or as natural, including the maps. So let’s look at those next.

One thing I’ll say for the four maps we had a chance to play during our sessions is that they were all very different from one another. This is in contrast to the Champion Hill mode, where the maps felt starkly similar, especially in terms of color palette which was all brown and grey and army green. Those maps made it very hard to see enemy players. In the MP session, this was not really an issue.

Eagle’s Nest—Hitler’s famous alpine base—was the smallest of the four maps we played. It’s comprised of a compound and basically three lanes. The left lane skirts the compound with a wooden walkway or a more open outdoor corridor that passes by the windows and walkways leading inside. The right lane is a long outdoor hallway perfect for sniping from either side.

Most of the action takes place inside, however. There are a series of medium-sized rooms to fight through, with lots of exits and entrances on either side. This is a pretty chaotic map since most of the engagements are close-quarters. I will say, I didn’t love the flow on this one but I didn’t hate it, either.

Gavutu is a small South Pacific island map. It has lots of winding paths, a long open central lane perfect for sniper battles, and several compounds to explore. In a Domination map, the A and C points are both on the beach while Bravo is inside the largest compound. Here, a tank on a platform raises up and down from the roof to the interior where the point is, which is an interesting wrinkle.

I liked this map quite a lot. It’s medium-to-large but at least in Objective-based modes I think it works pretty well even in 6v6. This was the first map we played on and we played in Patrol mode. You can watch the entire Patrol match in the video I made below:

Another medium-sized map, Hotel Royal is mostly an interior map, but includes lanes around both sides and a rooftop to battle on. Two atriums adorn the roof and you can break the glass and drop in on unsuspecting enemies from above. Inside you’ll find plenty of cover, with bars and lots of different rooms to hide in.

By far the largest of the maps we played, Red Star is a sprawling courtyard surrounded by large buildings, most of which you can enter. Second or third-story perches provide lots of opportunities for snipers, as do open rooftops. This mode can work in 6v6 but only with Objective modes. In TDM this will feel way too empty. I also played Blitz on this with something like 24 players on each team. It was . . . chaotic to say the least. Aesthetically I enjoyed this map, but it’s awfully big for a Call of Duty map.

Graphically, Vanguard looks fine but it’s nothing awe-inspiring. Modern Warfare had a somewhat colorless palette but it worked in its own way, evoking a realism that gave the game a distinct feel. Black Ops Cold War completely dropped realism in favor of bright colors and diverse locations. This made it easier to spot enemies and added to the game’s more arcadey experience. I didn’t like it as much at first, but it grew on me and I now prefer it to Modern Warfare’s drab presentation.

Vanguard, once again, falls somewhere in-between. It’s not as drab as Modern Warfare but it’s not quite as colorful as Cold War.

Speaking of Cold War, Treyarch did some cool things with that game that are scrapped in Vanguard, including the much larger control points in modes like Dom and Control and Hardpoint. I really liked those changes, but we’re back to much smaller points here.

I’m also a little bummed out that Killstreaks are back instead of Scorestreaks. Killstreaks penalize Objective-based play and reward getting kills. Players like me who throw themselves on the objective every time die too much to get many Killstreaks. The only time I got all of mine in a single match was when I ignored the Dom points and played as a sniper. That’s a weird incentive. Since Killstreaks reset on death, you’re just screwed. I prefer Cold War’s algorithm, which rewards staying alive but doesn’t reset a streak on death. Here are the Killstreaks we know of:

The mini-map is the same as Modern Warfare’s, meaning it won’t reveal players as red dots on the map when they fire with unsuppressed weapons. There’s a Radar perk that turns this function back on, but of course that takes away from other useful Perks. I’m not sure why we’re reverting to this system which simply takes vital information away from players, but I suspect it’s to even the playing field a bit, hamstringing better players in favor of casuals.

All told, I had a fun time with Vanguard’s multiplayer but I’ll need to spend a lot more time with it to really get a full sense of what to expect from this game. The gunplay feels pretty good and there’s a wide array of guns to choose from. Since Gunsmith is back, you’ll be able to customize to your heart’s content with all number of attachment combinations to choose from.

With a couple Beta weekends coming up, we’ll have plenty of time to dig into the game further, try out more weapons and really get a feel for Vanguard’s gameplay loop. I am cautiously optimistic—but definitely not sold.