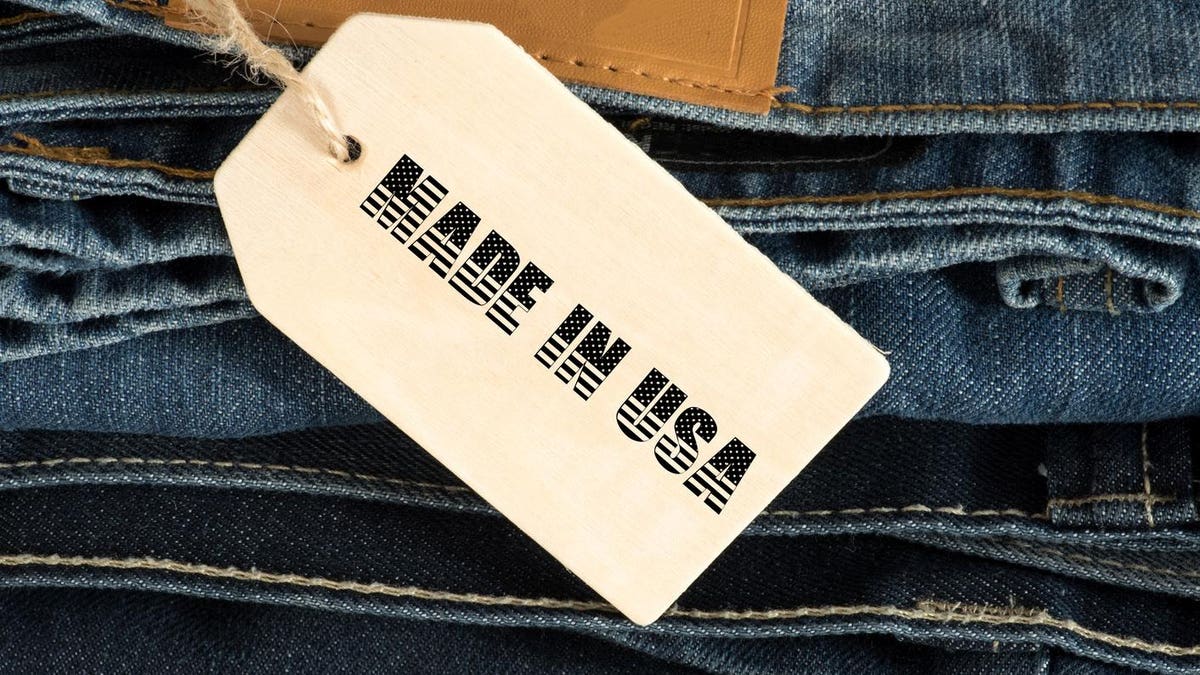 Clothing that’s “Made in America” accounts for 3% of all apparel sold in the United States. That’s not nothing in a $1.5 trillion global fashion market. But as Covid-19 continues to upend supply chains, the trade battle drags on with China, and the Biden Administration champions his “Buy American” program, domestic-made fashion is at last on the rise.

“Almost every factory I’ve talked to this year has more demand than at any time in the last decade,” says Christian Birky, founder of Because Capital, a new firm set up to buy American manufacturing facilities and improve their social and environmental impact.

Key to a healthy comeback for the nation’s apparel sector are good wages and strong labor laws, like California’s Senate Bill 62, the Garment Worker Protection Act, which is currently on Governor Gavin Newsom’s desk, awaiting his signature.

SB62 aims to abolish sweatshops in America’s largest garment-producing hub by ensuring garment makers are paid the minimum wage. It also creates joint liability for brands when wages slip below the legal level.

“SB62 supports the future of American manufacturing because it supports the companies that are doing things right,” says Birky.

In fact, 158 fashion manufacturers and fashion brands have officially endorsed the Garment Worker Protection Act, including Saitex, the sustainable denim maker for global giants like J. Crew, Target, and Ralph Lauren , which onshored to L.A. during the pandemic, bringing 230 jobs to the state. Likewise, sustainable fashion powerhouse Reformation, which grew to a $100 million company in under a decade and produces in Los Angeles, is a supporter.

“It was a really easy decision for us, especially as an L.A.-based brand,” said Reformation’s head of sustainability at a press conference in July.

Yet powerful trade groups that largely represent big businesses that manufacture overseas are threatening to undermine this comeback, using scare tactics against SB62.

Rick Helfenbein, the retired chairman of the American Apparel and Footwear Association, a trade association that includes brands like Gap, Under Armour , and Levi’s, wrote in Forbes that raising California’s garment workers wages to the state minimum would put California’s “46,000 entry level garment jobs at risk.” About 12% of AAFA’s membership and two companies on its board produce stateside, according to its website.

Likewise, the California Chamber of Commerce, a big business advocacy group that tries to quash worker rights bills perceived as a threat to its corporate membership, has warned of an exodus from the state if brands have to ensure legal wages in their factories.

The notion that American fashion has to underpay its garment workers to compete is disingenuous. No American aspires to wear Sweatshop-Made-in-USA clothing. It undermines the entire premise. It’s also just wrong.

“It’s not cheap prices that are driving them here,” says Birky of brands looking to onshore, a term that refers to manufacturers bringing work back to the U.S. “It’s their increased focus on speed to market, innovation, and sustainability.”

California is not a stand-in for overseas production, where factories are gargantuan and shipping times slow. L.A., the country’s largest garment-producing hub, is known for its quick turnaround, easy-access ports and distribution centers, and highly skilled workforce. Those 46,000 workers are not, as Helfenbein describes, “entry-level” workers. Many have 20-plus years of experience.

As a high-wage, developed country, America can’t compete with Asia on labor costs. Nor should it. American innovation and innovative policy can instead lead to worldwide improvements in the fashion industry.

Saitex for example has been called the world’s “cleanest denim mill” and uses advanced technology like laser cutting and big data to save energy and water. “We’re training labor to the next level that should exist in modern manufacturing landscapes,” owner Sanjeev Bahl has said. “And you’re creating an equal opportunity for people to get respectable jobs, which are sustainable.”

Whose Made in USA Dream?

Helfenbein’s article also claims that California’s Made in USA project is a “dream,” but then says that driving down the cost of labor is the only way to “​​stay competitive in the global marketplace.”

Of course what he’s describing is a nightmare for California’s garment workers, their families, and their communities, as many earn a third of a minimum wage ($5.15 an hour is the average) and are owed millions of dollars in back wages for garments they’ve made, often while sewing clothes for big brands like Fashion Nova, Ross Dress for Less, and Urban Outfitters .

Garment workers in California are underpaid through the piece rate system, where they’re paid pennies per garment sewn. SB62 will simply require factories to meet the minimum wage. After that, they can use the piece rate as a productivity bonus.

“SB62 is not stopping factories from using piece-rate incentives, just from using this as an excuse to ignore minimum wage laws,” explains Birky.

The reality is that the proliferation of sweatshops hurts the American dream. It also holds back future growth and makes it harder to attract talent. “Apparel factories have orders but are having a hard time recruiting because they have a reputation of being sweatshops, and people don’t want to work there,” says Birky. According to labor nonprofit, the Garment Worker Center, 30 brands have written personal letters to the California governor saying that the state’s paltry labor conditions are a reputational threat to their business.

What’s the Rub for the Industry Groups?

The AAFA and California Chamber of Commerce are likely stirring up offshoring fears because they’re unhappy with a key provision of the Garment Worker Protection Act, which is SB62’s expanded brand liability.

Once passed, SB62 will ensure that brands and retailers who use subcontractors that pay garment workers below the minimum wage will be held jointly liable for a worker’s stolen wages. “Companies are just averse to being held liable for any situation they cannot control,” writes Helfenbein.

It’s a myth that brands and retailers “cannot control” what happens in their factories. A U.S. Department of Labor investigation found that brands’ low prices are what’s driving L.A.’s endemic sweatshop conditions. Research has established time and again that big brands in particular control the pricing, pace of production, sustainability and social compliance, the human rights outcomes, and most importantly, worker pay in factories.

Valentine Carbajal, an L.A. factory owner featured in CBS Morning’s recent expose of the city’s sweatshops, described to reporters how brands were underpaying him, and so he was in turn underpaying his workers. The way it works is brands pay a factory a certain amount of money per garment, and the factory pays the workers out of that lump sum. One woman sewing a stack of dresses said she was earning only $200 a week (garment workers toil 60 hours a week on average). The responsibility points in one direction: Brand pricing.

And yet the law, as it’s currently written, allows brands and retailers to turn a blind eye to how their own purchasing practices impact people in the supply chain. They’re not accountable.

Take, for example, the all-too-typical response of Fashion Nova’s legal counsel, which told The New York Times after wage violations amounting to $3.8 million dollars were discovered in their L.A. factories last year: “Any suggestion that Fashion Nova is responsible for underpaying anyone working on our brand is categorically false.”

SB62 would at last make this argument null and void.

It would also ensure that taxpayers are not on the hook for the missing wages, as they currently are.

Who Will Stay and Who Will Go?

Will unscrupulous brands just leave California if SB62 passes? They’ll have a hard time finding another L.A., with its skilled garment workforce and a two-week turnaround from design to delivery. They increasingly have nowhere else to go. The race-to-the-bottom that characterized the last three decades of fashion is drawing to a close.

Two-thirds of North Americans now want responsibly made clothing. Globally, labor laws are tightening up and expecting more of corporations. The EU’s coming due diligence laws (Germany has just passed one) will fine companies for human rights violations in their supply chains. U.S. Customs and Border Protection is already clamping down on products made with forced labor.

It’s worth noting that fast fashion brands and discounters can easily afford to pay the minimum wage and stay in L.A., too. Brands pay on average 73% of what they should to their California factories to meet the minimum wage. Raising prices to suppliers to fill that gap would not be a major ask for big companies like Fashion Nova and Ross Dress for Less. Likewise, Forever 21, another brand that has produced for years in L.A., would need only charge $5 more per item to pay American garment workers a minimum wage. That’s not a budget-busting increase, even for a fast fashion brand.

Once the Garment Worker Protection Act passes, brands accustomed to the turn-the-blind-eye approach will have to change. That’s the point. This is undeniably a good thing for workers, for consumers, for taxpayers, for the environment, and for society as a whole.

“It’ll mean brands need to make more conscious decisions about who they’re working with. They’ll need to make sure they don’t just blindly trust the prices that factories give them,” says Birky. This is hardly an onerous ask. It’s just good business.

Unfortunately, certain elements of America’s big business community would like to preserve California as the last global haven for sweatshops. The California governor will hopefully see through their scare tactics.

America does not need to exploit its garment workers to compete.