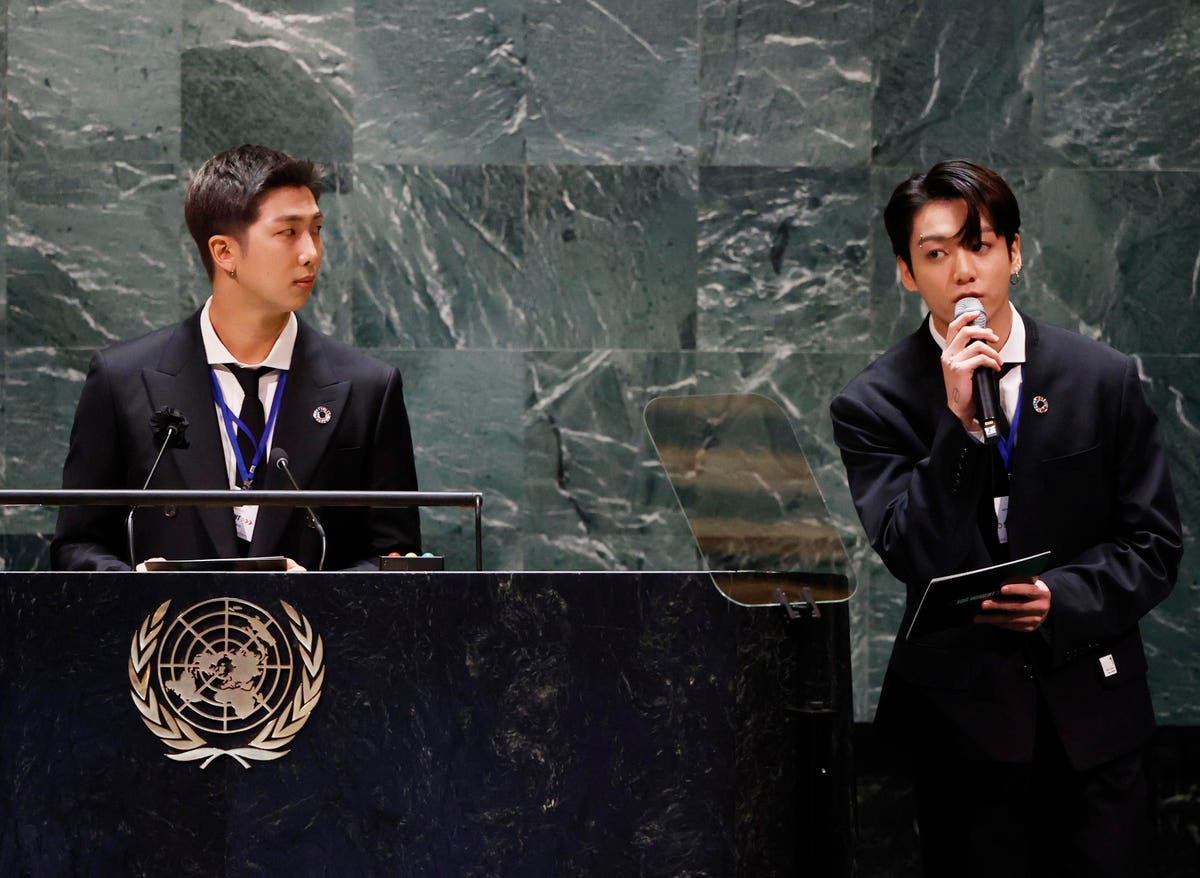 ARMY consists of millions of BTS fans, or should we say stans. And they’ve got a new hashtag, #ARMYvaccinatedtoo, about Covid-19 vaccines. Now any ARMY hashtag is like putting avocado on anything. It’s got a really good chance of being quite formidable. So it wasn’t too surprising when, as of 9 pm today, #ARMYvaccinatedtoo was already topping Twitter’s trending in United States list with 24.6K tweets, easily outdistancing words like “Novocain.”

The hashtag emerged after BTS, the OMG-famous K-pop group, spoke at the United Nations (U.N.) General Assembly today. Yes, it was basically an U.N.-believable appearance. There, BTS member J-Hope said to the Assembly, “Some of you heard the news that we were coming to the U.N. and a lot of you were wondering whether we were vaccinated. And yes, all seven of us, of course, we received COVID-19 vaccination,” as you can see in the video accompanying the following tweet from the U.N.:

By “some,” J-Hope may have meant millions, because, after all, it is BTS. This super popular band with a worldwide following appeared in the General Assembly Hall to support the U.N. 2030 goals. If you are not familiar with the U.N.’s 17 sustainable development goals, look them up. They’re pretty darn important and include things like ending poverty and hunger, achieving gender equality, reducing inequality, and addressing climate change. If you don’t support such goals, go to the kitchen, find a large pie, and then push the pie firmly into your face. During his speech to the Assembly, bandleader RM emphasized, “Every choice we make is the beginning of change, not the end.”

BTS is serving as special envoys from South Korea and were introduced by South Korean President Moon Jae-in, who described them as “exceptionally outstanding group of young men who are connecting with the youth across the world.”

You can see the whole presentation in the following video from Forbes, including a special performance of their hit single “Permission to Dance,” at the U.N. Headquarters in New York City:

BTS formed in the early 2010s and has since become a worldwide sensation. They’ve been churning out hit songs and write their own songs and lyrics, many of which are socially conscious. Their growing list of accolades includes becoming the first South Korean band to ever have an album debut at No. 1 on the US Billboard chart and performing at some high profile venues such as Good Morning America and Saturday Night Live.

Oh, and they have ARMY behind them. Not an army. Not the army. But ARMY, which stands for Adorable Representative M.C. for Youth. ARMY consists of millions of BTS fans, who have become a force to be reckoned with on social media. BTS’ YouTube channel has over 40 million followers. ARMY runs a Twitter account that has over 30 million followers.

In recent years, many K-pop fans including ARMY have taken to social activism on social media. For example, in June 2020, then-U.S. and now Mar-A-Lago resident President Donald Trump was going to hold a campaign rally in Tulsa, Oklahoma. As I described for Forbes back then, this rally was scheduled to occur when the Covid-19 coronavirus was urging in the area, which was a bit like trying to cook some flambé while your house is on fire. K-pop fans then decided to reserve thousands of seats at the rally through the Trump campaign’s website. This helped convince the organizers that there would be whole lot more attendees than ultimately appeared.

They’ve also drowned out hashtags such as #WhiteLivesMatter, and #WhiteoutWednesday with K-pop photos and videos, which undoubtedly further angered white supremacists.

And now ARMY may taking on the anti-vaxxers with the hashtag #ARMYvaccinatedtoo. As you may have seen, there are plenty of anonymous anti-vaxxer social media accounts, which can make the anti-vaccination movement seem more of an army than it really is. It isn’t clear how many actual humans are behind a given set of accounts that continue to spread misinformation and disinformation about Covid-19 vaccines. After all, one human can easily start and maintain dozens of Twitter accounts and make them seem like they are communicating with each other like real people.

They’ve already tried to pollute some of the responses to the #ARMYvaccinatedtoo tweets. But that may be like peeing into a tornado given the traction that the hashtag has gotten. Here’s one example of a tweet that used the hashtag:

This one reminds people to wear face masks even after being fully vaccinated:

Another one admitted a fear of injections but emphasized the importance of getting through it:

Then there was this tweet from a someone who describes herself as an eye surgeon and a member of the BTS ARMY since 1/28/18:

So will this new hashtag be the Jin and tonic to the sour disinformation that’s being spread by anti-vaccination accounts about Covid-19 vaccines? Perhaps. It is hard to combat all those unfounded claims about Covid-19 vaccines altering your DNA, causing keys stick to your forehead, or making your cousin’s friend’s balls swell. But, once ARMY is mobilized, it can be a bit of “Mic Drop.”