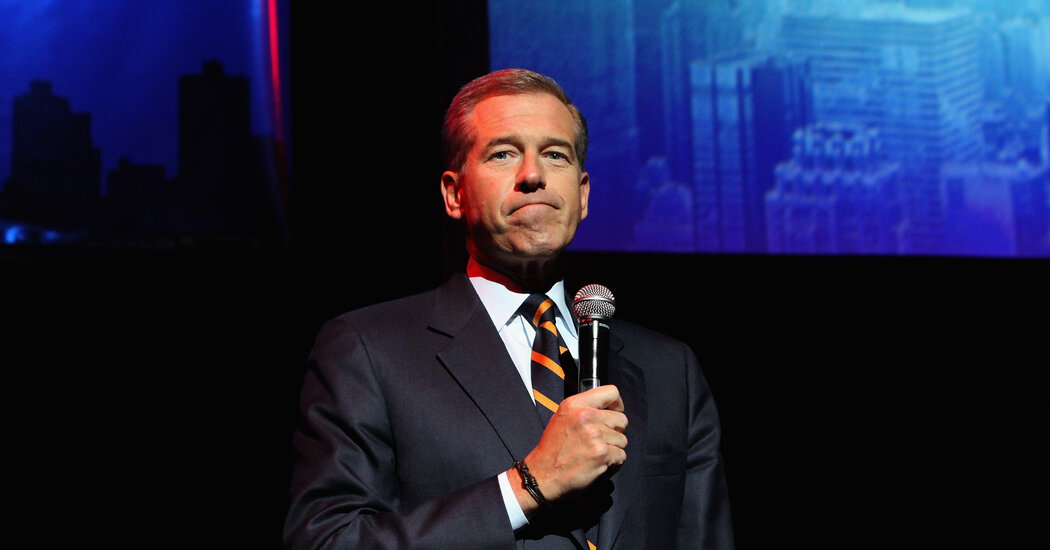 Brian Williams, the square-jawed news anchor laid low by a fabulism scandal who mounted a career comeback with a popular 11 p.m. talk show on MSNBC, announced on Tuesday that he would step down from his program after a five-year run and depart NBC News entirely at the end of the year.

The exit of Mr. Williams, whose contract is set to expire next month, comes amid a ratings decline in the cable news industry and restlessness among some of MSNBC’s star personnel. Rachel Maddow, the network’s top-rated anchor, is expected to refocus soon on projects outside her nightly prime-time show, although she has announced no formal plans.

“Following much reflection, and after 28 years with the company, I have decided to leave NBC upon the completion of my current contract in December,” Mr. Williams wrote in a statement on Tuesday. “I have been truly blessed. I have been allowed to spend almost half of my life with one company. NBC is a part of me and always will be.”

Mr. Williams revealed no immediate plans for a new on-air role. “This is the end of a chapter and the beginning of another,” he wrote. “There are many things I want to do, and I’ll pop up again somewhere.”

A person familiar with Mr. Williams’s decision-making who requested anonymity to share private conversations said the anchor would consider his options and hoped to return to television or another media platform soon.

Rashida Jones, the president of MSNBC, wrote in a note to staff on Tuesday that Mr. Williams “has informed us he would like to take the coming months to spend time with his family.”

“We and our viewers will miss his penetrating questions and thoughtful commentary,” she wrote.

For Mr. Williams, 62, the departure from NBC News, the division that houses MSNBC, is another twist in a career that scaled the heights of succeeding Tom Brokaw as the anchor of the “NBC Nightly News” to the lows of a six-month unpaid suspension in 2015, after he acknowledged exaggerating an anecdote about a helicopter ride in Iraq.

His credibility as a journalist tarnished, Mr. Williams returned to television as a breaking news anchor at MSNBC before he and Andrew Lack, then the chairman of NBC News and a close friend, hatched an idea over an Italian dinner for a comeback vehicle. “The 11th Hour” was designed as a late-night show mixing news and conversation about the news, with Mr. Williams as a genial ringleader — part David Brinkley, part Dick Cavett.

It debuted at the height of the 2016 presidential election and quickly found an audience. Left-leaning viewers shocked by the election of Donald J. Trump as president were flocking to MSNBC, and they seemed to forgive Mr. Williams’s past transgressions. In May 2017, “11th Hour” scored bigger ratings than its rivals at CNN and Fox News, giving MSNBC its first outright win in the 11 p.m. time slot since 2001. (The show beat CNN but lost to Fox News in total viewers during the most recent quarter.)

Mr. Williams, who joined NBC News in 1993, has not expressed much interest in returning to a traditional nightly evening newscast, according to the person familiar with his thinking. That would seem to rule out a gig like anchoring the “CBS Evening News,” whose anchor, Norah O’Donnell, is on a contract that expires next year.

Jeff Zucker, the president of CNN, has been seeking high-wattage talent for a new streaming service, CNN+, which is set to start in 2022. Mr. Zucker approached Ms. Maddow about a job before she decided to renew her deal at MSNBC, a discussion first reported by Puck News.

The loss of Mr. Williams means MSNBC will have to fill his weeknight slot and possibly choose another anchor to help lead coverage of election night and other big political events. In 2020, Mr. Williams often co-anchored the cable network’s political broadcasts with Ms. Maddow and another network star, Nicolle Wallace.

Before his suspension in 2015, Mr. Williams made frequent appearances away from the anchor desk. He hosted an episode of “Saturday Night Live” in 2007, appeared on the sitcom “30 Rock,” and was a go-to guest on late-night shows hosted by David Letterman, Stephen Colbert and Jimmy Fallon.