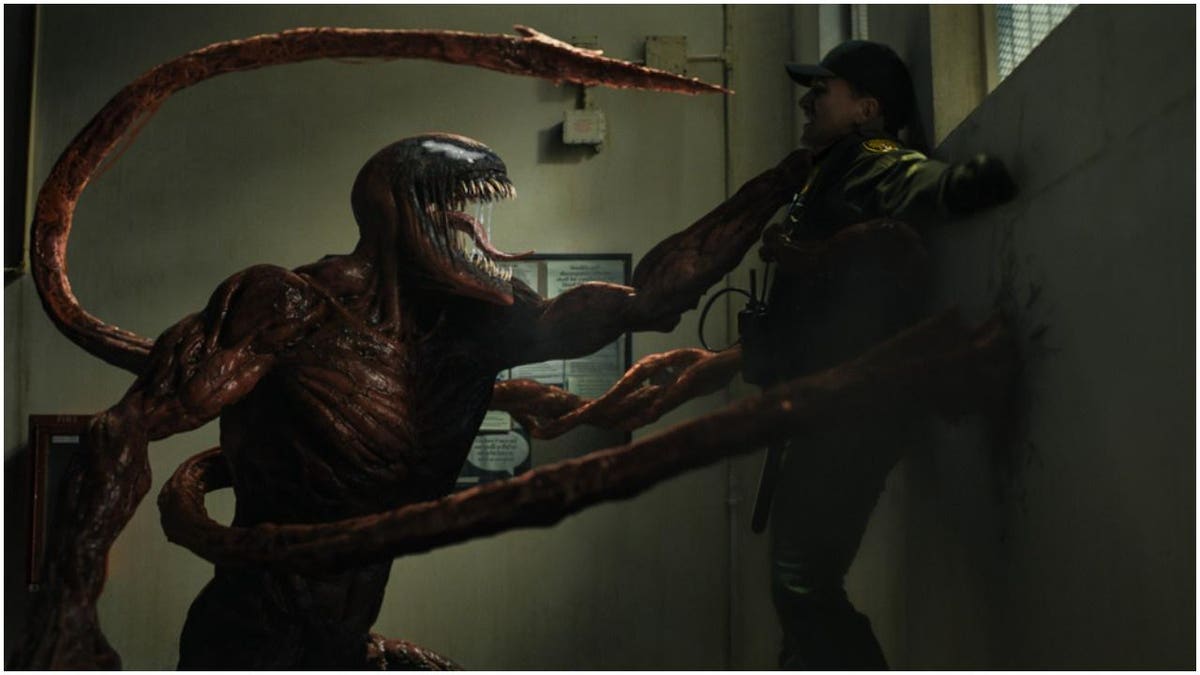 As seen with A Quiet Place part II, F9 and Shang-Chi and the Legend of the Ten Rings, the robust opening day for Venom: Let There Be Carnage shows that must-see tentpoles are performing as otherwise expected.

So much for so-called superhero fatigue… Sony’s Venom: Let There Be Carnage soared to the top of the domestic box office on Friday, earning a robust $37.25 million. That includes $11.6 million in Thursday previews, compared with $8 million in previews and a $32.5 million opening day on this same weekend in 2018 for Venom. So, yes, despite obvious pandemic-specific variables and concerns, Venom 2 surpassed the unadjusted opening day of its predecessor. So, we could see a scenario where the film opens above the $80 million debut (a record for October at the time) of its predecessor.

The Andy Serkis-directed sequel earned 31.1% of its Friday gross on Thursday compared to 24.6% for the first Venom. That does point to a more frontloaded opening weekend, which likely would have been the case even in non-Covid circumstances. An identical multiplier to Venom would give the sequel a $91 million Fri-Sun launch. A multiplier on par with Deadpool 2 ($125.5 million from a $53 million Friday) would give Venom 2 an $83 million Fri-Sun debut, above even Black Widow ($80.3 million). Even Black Widow-sized frontloading (not terribly likely since Venom 2 is “only in theaters”) would give it a still terrific $77 million launch.

That would be just above F9 ($70 million) and Shang-Chi ($75 million amid a $95 million Fri-Mon Labor Day launch). Considering the comparatively decent reviews (58% and 5.5/10 versus 30% and 4.6/10 for Venom) and “delivers what you liked about the last movie” buzz, I would expect an opening closer to Black Widow than F9. Either way, we’re talking about a $110 million sequel to a $90 million-budgeted predecessor, so the bar for success isn’t sky high. Even Sony’s arguably low-ball estimate of a $71 million Fri-Sun frame (which would be a miserable 1.9x multiplier) would be a huge win.

As for “what went right,” audiences liked Venom more than critics, pushing the Tom Hardy/Michelle Williams origin story to $213.5 million domestic. But even those of us who didn’t entirely endorse the film tipped our hat to Hardy’s bonkers performance and the film’s flirtations with outright camp and metaphorical queer romance amid an otherwise conventional superhero origin story plot. With Hardy co-writing the film with Kelly Marcel, Let There Be Carnage has been (correctly) sold as 95 minutes of “just what you liked about the last movie.” This was a case of a studio learning the right lessons from a blow-out success.

Offering up a hammy Woody Harrelson as Carnage is obviously an added-value element, and Sony pulled off something noteworthy here. There was obviously demand for a solo Venom movie. I feared the first one would play like Catwoman but instead it played (relatively speaking) like The Mask. Moreover, the specific camp comic sensibilities of the first film and especially this sequel, powered by Hardy’s gung-ho star turn, have created a franchise where even folks who don’t care about Venom in the abstract have at least some interest due to this specific franchise’s incarnation of the “lethal protector.”

If Venom and Spider-Man ever meet up and beat each other up (either in this December’s multi-verse hopping Spider-Man: No Way Home or a future Venom flick), the value will be because Tom Holland’s MCU Peter Parker will be rubbing shoulders with Tom Hardy’s offbeat Eddie Brock. That specificity is far more valuable than merely the abstract notion of Spider-Man meeting Venom. After this blow-out debut, Sony’s incarnation is popular and distinct enough that a cross-over is a bonus rather than a necessity. Like Jumanji, Sony revived a franchise by crafting something with value even for those who initially didn’t care.

MGM opened The Addams Family 2 in theaters and PVOD yesterday, a release strategy which will be offered for Paramount’s Clifford The Big Red Dog on November 10. The animated sequel, starring Oscar Isaac, Charlize Theron and Chloe Grace Moretz, earned $5.5 million on Friday. That sets the stage for a likely $16.5 million opening weekend. Yes, that’s way below its predecessor’s $9.7 million Friday and $30 million opening weekend. Even in non-Covid circumstances, this was always going to see a comedown.

The first toon earned $100 million domestic and $200 million worldwide on a $24 million budget, providing a rare all-around hit (outside of Bond and Creed) for MGM. But it wasn’t exactly a beloved new classic, providing just enough surface-level entertainment for the kids and adults to justify a viewing for fans of the IP. It qualified as a multi-generational nostalgia pitch, with fans of all ages having discovered the brand at different entry points (the comic strip, the television show and/or the 1990’s live-action movies) showing up for the first theatrical Addams Family offering since Addams Family Values in 1993.

As is the case with any number of animated franchises (LEGO Movie, Angry Birds, Secret Life of Pets, etc.), the first film earned some four-quadrant interest, this sequel was destined to be seen as a “just for kids” affair. I obviously can’t speak for the PVOD grosses, although it’s currently ranked at 40th on Amazon and 54th on Google while placing fourth on Vudu and second on YouTube. A sequel was inevitable, as was a big drop from its predecessor.

Likewise, Warner Bros.’ The Many Saints of Newark is something of a multi-generational nostalgia play. Folks who watched The Sopranos on HBO during the original run (1999-2007) and those who caught up with the show elsewhere over the last 14 years arguably had at least some curiosity about this David Chase-directed prequel film. The picture, starring the late James Gandolfini’s son as young Tony Soprano, earned decent reviews and a lot of media coverage. Albeit, Covid or no, HBO Max or no, this one was always going to play more like The X-Files: I Want to Believe than The X-Files: Fight the Future.

Nonetheless, especially by the grim standards of most of Warner Bros.’ 2019/2020/2021 “studio programmers,” a $1.9 million Friday and likely $5.5 million opening weekend almost qualifies as a win. It’s sadly an opening on par with any number of pre-Covid and post-Covid WB “just a movie” offerings, think The Kitchen, Richard Jewell, The Way Back, Malignant and Cry Macho. Like Tom & Jerry back in February, this one arguably qualifies as a “successful disappointment,” in that an over/under $6 million debut would be about how it played had it underwhelmed in normal times.