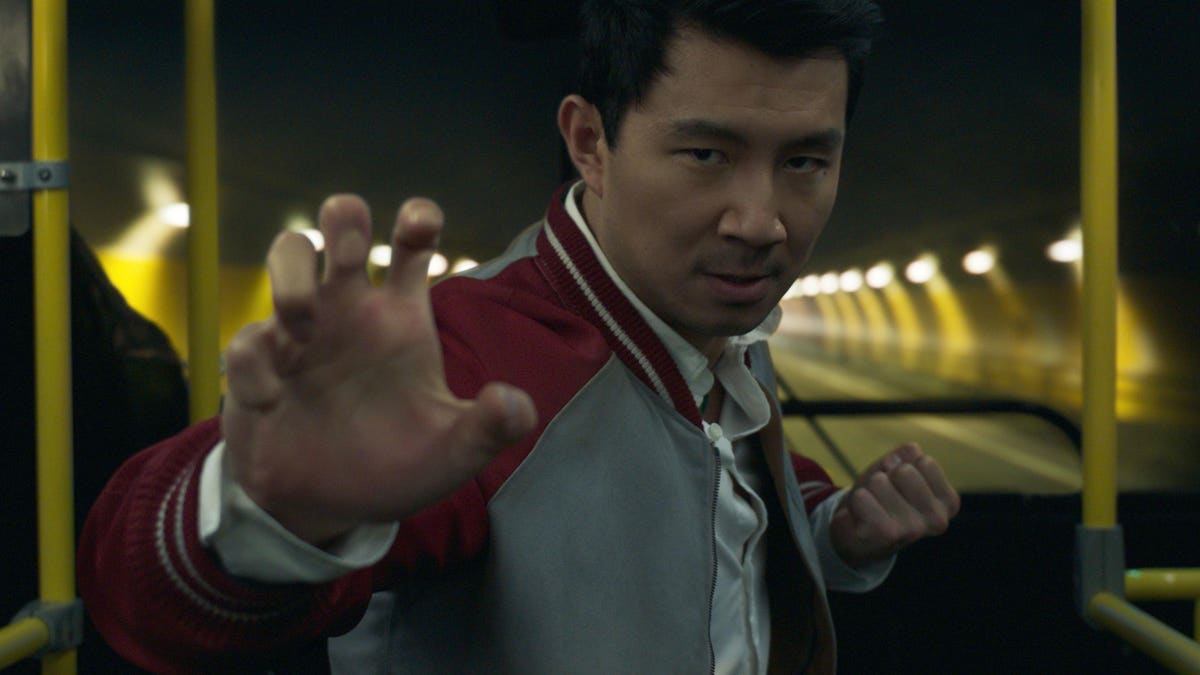 I gave Disney some grief for sitting on the sidelines while Universal and Warner Bros. kept theaters afloat only to throw the Black Widow release into chaos by making the Disney+ release the center of the narrative. However, the Mouse House did come back to us now, at the turn of the tide. Oversized $200 million budget aside, Jungle Cruise has managed excellent holds since its -55% second-weekend. 20th Century’s Free Guy became a well-liked original whose likely $300 million-plus cume would be decent for an original star-driven fantasy even in non-Covid times. And now, Marvel’s “only in theaters” Shang-Chi and the Legend of the Ten Rings (review) came out swinging. The Simu Liu/Awkafina/Tony Leung action fantasy parlayed obvious anticipation, strong reviews and solid buzz for a superb (even by non-Covid standards) $71.4 million Fri-Sun/$83.5 million Fri-Mon domestic (and $139.7 million worldwide) debut.

That’s above the $70 million Fri-Sun debut of F9, with the four-day total above the $80 million Fri-Sun launch of Black Widow. Folks who showed up for an anticipated film over a holiday weekend would have otherwise done so over a conventional Fri-Sun frame. Spider-Man kept the Fri-Sun record($114 million in 2002) for so long partially because so many competitors (Matrix Reloaded, Return of the King, Passion of the Christ, Shrek 2, Revenge of the Sith, X-Men: The Last Stand, etc.) opened on Wednesday or Thursday. This $83 million Fri-Sun estimate (I’m guessing the final figures will be higher) thus stands alongside the $85 million-$95 million Fri-Sun debuts Thor: The Dark World, Captain America: The Winter Soldier, Guardians of the Galaxy and Doctor Strange. It also nearly tripled the previous Labor Day record ($30.5 million for Rob Zombie’s Halloween in 2007).

Shang-Chi and the Legend of the Ten Rings (which earned $8 million domestic in IMAX alone) showed that Labor Day weekend, long considered a dead zone for would-be tentpole as summer came to an end and kids went back to school, is as much a fertile launching pad for a big-deal franchise title as any other weekend. The weekend after Labor Day was a dead zone until Warner Bros. launched It to $123 million in 2017. Chris Nolan’s Tenet tried, because being a hero is about trying even if you fail, to jump-start the theatrical industry last Labor Day. While its $53 million overseas debut was solid, its $20 million 11-day Labor Day week debut was not. Destin Daniel Cretton’s well-reviewed ((92% fresh and 7.5/10 on Rotten Tomatoes) and well-received (an A from Cinemascore) MCU epic is the first unmitigated Labor Day blockbuster.

Concerns that Shang-Chi would open super-duper low for an MCU movie, concerns that were more about Covid variables (and underwhelming trailers) than anything to do with anticipation for the movie itself, turned out to be laughably pessimistic. Even the Fri-Sun frame is well above the $55-$65 million likes of The Incredible Hulk, Thor, Captain America and Ant-Man and just below Ant-Man and the Wasp ($76 million) and Black Widow ($80 million). As for those trailers, Disney pulled a bait-and-switch not unlike with Aladdin, where they knew that audiences would show up and kept most of the “good” stuff out of the marketing. This will hugely benefit the film in terms of legs, as folks who show up and are surprised by a big movie take an even greater sense of “ownership” over spreading the good word.

While the last two “newbie” MCU movies obscenely overperformed, Shang-Chi is closer to the likes of Ant-Man and Doctor Strange in terms of general audience interest and IP-specific fandom. Up until the $1.346 billion-grossing Black Panther and $1.128 bullion-grossing Captain Marvel, the $677 million-grossing Doctor Strange held the record for a “new” (sans Iron Man) MCU origin story solo flick. Up until early 2017, the only non-Tony Stark MCU movie to breach even $715 million was Guardians of the Galaxy ($773 million in 2014). Up until early 2018, only Guardians 2 ($869 million) and Thor: Ragnarok ($854 million) cracked even $800 million sans Iron Man. Even sky-high performances for Black Panther and Infinity War didn’t prevent Ant-Man and the Wasp ($620 million worldwide) from “only” performing about as well as Ant-Man ($519 million worldwide).

Shang-Chi and the Legend of the Ten Rings A) is only in theaters for the first 45 days and B) has the field to itself in terms of four-quadrant, kid-friendly, big-scale entertainment. With Venom: Let There Be Carnage shifting to October 15 (I told everyone the failures of Snake Eyes and The Suicide Squad were mostly about the general audience interest in those specific films, dammit), there’s nothing akin to Shang-Chi between now and No Time to Die on October 8. Unless Dune pops on October 22, it’ll just be No Time to Die, Shang-Chi and Venom 2 until Eternals in early November. The rest of the field will mostly be adult-skewing flicks (The Card Counter, Cry Macho, The Eyes of Tammy Faye, etc.) and horror movies (Candyman, Malignant, Halloween Kills, etc.).

Ant-Man opened with $58 million in 2015 and legged out to $180 million domestic, while even Guardians of the Galaxy nabbed $333 million in August 2014 from a $94 million debut. Conversely, Thor: The Dark World earned $96 million over its Fri-Mon Veteran’s Day debut and ended with “just” $206 million, a fate that would still put Shang-Chi just under $180 million. Legs like Black Panther ($700 million from a $242 million Fri-Mon debut), which may be unlikely but humor me, would give Shang-Chi a boffo $240 million domestic finish. Barring a very unexpected collapse, and I wouldn’t be too shocked by a big second-weekend drop followed by a then-leggy run (see also: Spider-Man: Homecoming), Shang-Chi could be the first movie to pass $200 million domestic since Bad Boys for Life in January 2020. Something-something-diversity.

Yes, this is more evidence, for better or worse, that diversity only matters for films audiences already want to see (R.I.P. Snake Eyes and In the Heights). It’s also a sign that MCU’s Phase Four focus on “not a white guy” superheroes will indeed keep the next batch of superhero origin stories and sequels from feeling too passé. Shang-Chi was both a big deal for Asian American moviegoers but also a top-notch martial arts fantasy that plays well to folks who couldn’t care less about the ethnicity of its stars. Most importantly for this discussion, the business-as-usual debut for Shang-Chi (no “successful disappointment” chatter today) is yet more evidence that theatrical exclusivity matters, and that if you give audiences something they want to see (A Quiet Place 2, F9, Black Widow, Candyman, etc.), they’ll still show up.