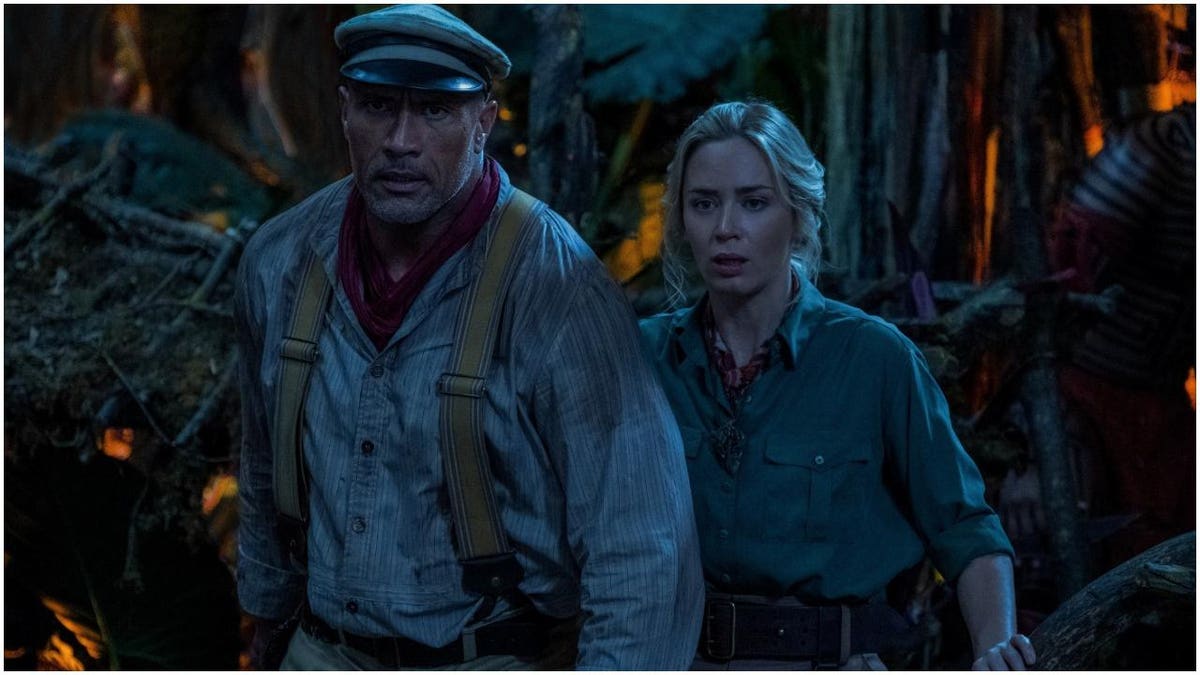 While Disney tries to turn the anniversary of Disney+’s launch (November 12, 2019) into a national holiday, their biggest non-Marvel release landed with a non-unexpected thud in China. Months after its domestic and otherwise global debut, Jungle Cruise opened in China yesterday with just $700,000 on Friday. The $200 million-budgeted Dwayne Johnson/Emily Blunt adventure, which earned $200 million on a $200 million budget (alongside whatever it earned on Disney+ Premier Access), debuts as “free on Disney+” this very day. The poor Friday in China positions it for a $2 million opening weekend and $6 million lifetime total. Now a big part of this near-invisibility is due to the lateness of its debut, arriving almost four months after the film’s late-July global launch.

But just two years ago, before Covid, Dwayne Johnson’s non-Fast Saga vehicles were earning anywhere from $63 million (Jumanji: The Next Level) to $155 million (Rampage). Even the less fantastical flicks (San Andreas with $103 million or Skyscraper with $98 million) were pretty reliable as supplements to good enough (or not quite good enough) global box office earnings. This isn’t to say “The Rock is no longer a movie star!” or any such nonsense. I’m pretty sure Red Notice, quality notwithstanding, is going to demolish Netflix viewership records this weekend, and I’m sure Black Adam will be fine no matter if we ever get a Red Notice 2, Jumanji 4 or a Hobbs & Shaw 2.

However, this is a broader issue, one where theatrical success in China for even otherwise successful Hollywood tentpoles becomes the exception rather than the rule. This isn’t a new idea, as you’ve seen me rambling about it since late 2014 (after I saw China’s Let the Bullets Fly in IMAX 3-D) and have seen a slew of specifically Chinese blockbusters dominating their multiplexes over the last few years. Speaking of which, The Battle At Lake Changjin has now earned $881 million in China alone, more than the global grosses of Spectre and Spider-Man: Homecoming. Comparatively, No Time to Die earning $54.7 million thus far is a triumph.

No Time to Die has earned $145.5 million domestic thus far, meaning it’ll likely pass $150 million this weekend. Presuming the domestic/overseas split remains 21.5/78.5, the film is at around $677 million worldwide and could/should pass $700 million this weekend. Whether its likely over/under $735 million cume is large enough to “break even” thanks to Covid-related delays, director swaps and the like, the $250 million James Bond film is still the third-biggest 007 movie, will soon be past all but Fallout ($792 million) among the Mission: Impossible movies and will soon pass F9 ($721 million) as the biggest MPA release since late 2019.

For better or worse, its current $475-$480 million sans-China overseas cume is by far the biggest of any 2020/2021 release thus far and would alone be bigger than any Hollywood release in the last two years save for F9. Heck, that overseas total is already awfully close to what F9 earned globally ($518 million) absent the $203 million in China Considering how unreliable China may continue to be for Hollywood flicks even after Covid, the key remains (as it has for the last decade) in crafting big movies that don’t need China to thrive. In the before-times, Disney wasn’t looking at China as a must-win territory for any of its big releases. Speaking of which…

Sony’s Venom: Let There Be Carnage earned another $700,000 to bring its cume to $198.7 million. As such, it should be passing $200 million domestic by the end of this sentence. The first Venom earned $269 million in China in late 2018, while this sequel may or may not ever play in China. That’s not good news for Sony, but the sequel only cost $110 million so its current over/under $430 million global cume is more than good enough. The next “test” for Sony is seeing if they can open Ghostbusters: Afterlife next weekend and the counter programmer Resident Evil: Welcome to Raccoon City over Thanksgiving. There’s not exactly a strong track record for horror over Thanksgiving, so fingers crossed.

Oh, and Clifford: The Big Red Dog earned $3.2 million on its second day of release, using the Veteran’s Day holiday to rise 63% from its $2.3 million opening day for a $5.581 million two-day cume. We can still expect a $15-$20 million Wed-Sun opening, with an A from Cinemascore helping it along. The surprisingly amusing (and entirely painless) live-action kid flick is concurrently available on Paramount+, but it’s still opening on par with what we might have expected sans-Covid and sans-streaming. The $64 million flick has work to do, but it’s off to a promising start. Meanwhile, Kristen Stewart’s Spencer has earned $3.179 million in its first week of domestic release.

Not to be forgotten, Marvel’s Eternals earned around $6.2 million on Thursday (+48% from Wednesday) for an $91 million week-long cume. The Disney flick should pass $100 million sometime tomorrow, just a day faster than The Incredible Hulk ($106 million in ten days after a $55 million debut in 2008), so we’ll see how well its overseas grosses hold up over the weekend. Oh, and Dune has passed the $85.5 million domestic gross of Alita: Battle Angel, putting it beyond (for now) A Wrinkle in Time ($100 million), Tomorrowland ($93 million) and Blade Runner 2049 ($92 million) among recent ambitious big-budget sci-fi fantasy whiffs. I am very curious to see how Jungle Cruise 2 and Dune part Two perform when the time comes.