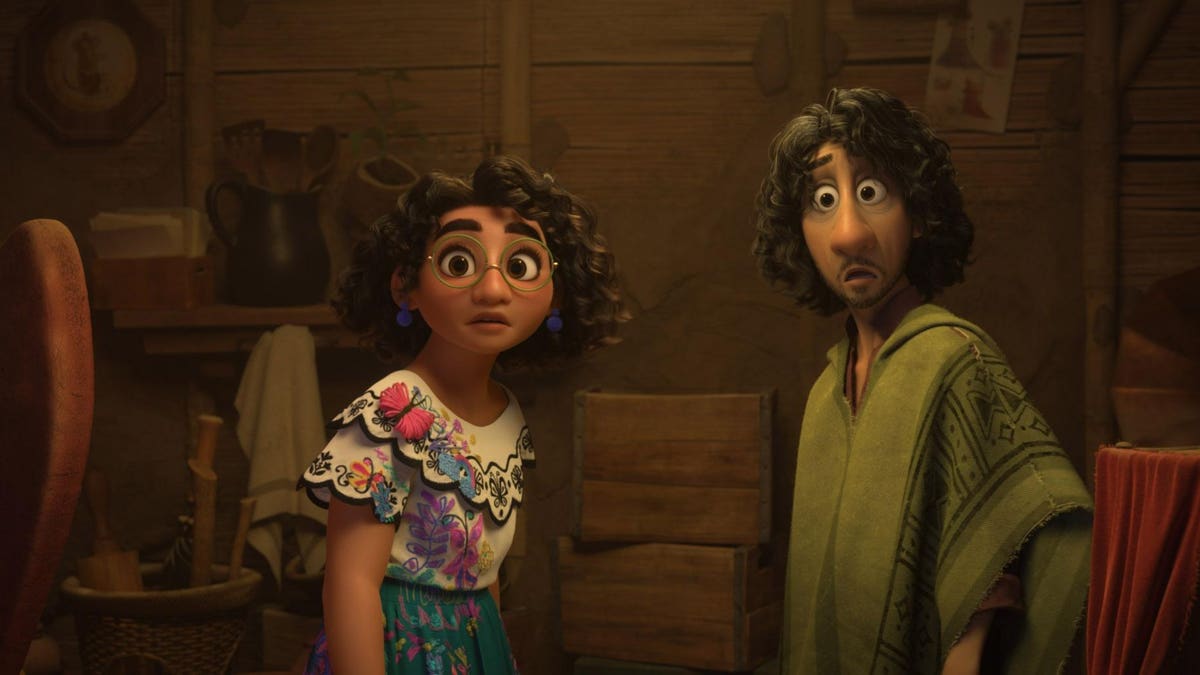 Those who read along with the bouncing ball of day-to-day Thanksgiving weekend updates (thank you for that) know that I spent a lot of time noting the ups and downs, in terms of daily holds, of previous Disney Thanksgiving releases as well as the last two DreamWorks toons (Rise of the Guardians and Penguins of Madagascar) to release over this key family-friendly weekend. Alas, now that the full five-days are in sight, Occam’s Razor has applied. Encanto essentially had near-identical “Wednesday to five-day weekend” legs as Moana and Coco, which means it had a gross essentially half as large as the last two non-sequel Disney Thanksgiving releases. Encanto, their 60th (non-Pixar) animated feature, earned just $40.3 million domestic and $69.6 million worldwide over the Wed-Sun frame.

Encanto, starring Stephanie Beatriz as a woman trying to unravel a mystery threatening her magical village (with new songs from Lin-Manuel Miranda) is a very good movie. But this is a very mediocre debut gross. The $27 million Fri-Sun gross is on par with the $24-$29 million likes of Meet the Robinsons, Bolt and The Princess and the Frog. The Wed-Sun cume is closer to Penguins of Madagascar ($35 million) and Rise of the Guardians ($32 million) than Tangled ($67 million) or Coco ($73 million), let alone the $83-$93 million likes of Frozen, Moana and Ralph Breaks the Internet. It’s easy to say “but… Covid!” and that’s surely a variable. Yet it’s not like Venom 2, Halloween Kills and Ghostbusters: Afterlife aren’t opening to best-case-scenario business.

First, you can argue that the much-publicized (or at least “more publicized”) 31-day window, whereby Encanto arrives on Disney+ on Christmas Eve, may have convinced more families to just wait a month and watch it over the holiday break. Sure, the shorter windows or concurrent streaming debuts for Halloween Kills, F9, No Time to Die and A Quiet Place part II didn’t terribly impact grosses, but A) I’d argue the studios didn’t go out of their way to alert consumers that they could wait a month or so and B) Disney+ has a lot more active/paying subscribers than Peacock or Paramount+. You also have a current Disney CEO who wants to make Disney+ the center of their universe, and a streaming-obsessed Wall Street egging them on.

Beyond cynical corporate conspiracy theories, we haven’t had an original animated blockbuster since Pixar’s Coco ($210 million domestic, $189 million in China and $808 million worldwide) four Thanksgivings ago. It’s not like Paramount’s Wonder Parrk, DreamWorks’ Abominable or Laika’s The Missing Link were huge hits in 2019. The big animation studios were sequels or IP-specific (Incredibles 2, Frozen II, Secret Life of Pets 2, The Grinch, Hotel Transylvania 3, LEGO Movie 2, etc.) in 2018 and 2019. Onward bombed just before Covid, and the pandemic compromised a slew of promising original toons. Soul and Luca became Disney+ premiers. The Mitchells Vs. the Machines and Vivo went to Netflix. Raya and the Last Dragon underwhelmed earlier this year as a theaters/Premier Access hybrid release.

It’s easier to argue that Encanto stumbled domestically this weekend because Disney put more emphasis on Disney+, scary reports of a new Covid variant kept audiences at home (which doesn’t explain the conventional weekend multiplier) or that the toon was generically marketed and didn’t stand out in the materials from the “spirited young girl goes on a quest to save her family” toons like Moana and Raya and the Last Dragon. It’s probably a little of all of those combined. But the other variable, the more “problematic” one, is that we were looking at a downturn for original animated features even before Covid, with the very real possibility that the marketplace for original animated features was becoming as precarious as for original live-action biggies.

I shudder to think of what will happen if Turning Red stumbles next March (presuming it even gets a conventional theatrical release) while Lightyear scores next summer. But for now, let’s try to be optimistic. Most of Disney’s 2021 releases (save for Black Widow and Eternals) have been unusually leggy. Free Guy earned $121 million from a $28 million launch, Cruella legged out to $85 million from a $26.5 million Fri-Mon Memorial Day weekend debut, Shang-Chi will pass $225 million domestic from a $94 million Fri-Mon Labor Day launch, Jungle Cruise topped $120 million from a $35 million bow and even Raya earned $56 million from an $8.5 million opening weekend. With rave reviews and an A from Cinemascore, I’m not ruling out decent holiday legs.

One reason for that is, all due respect to 20th Century Studios’ West Side Story, Searchlight Pictures’ Nightmare Alley and 20th Century’s The King’s Man, opening December 10, December 17 and December 22 respectively, Disney doesn’t have a year-end fantasy spectacular. For the first time since 2012, there’s no 800-lbs. gorilla opening in December taking the spotlight away from the November animated film. There’s no Star Wars movie, no Mary Poppins Returns or Into the Woods butting in. You can argue that the combined screen counts of Steven Spielberg’s musical remake, Guillermo del Toro’s horror remake and Matthew Vaughn’s World War I-set prequel amount to at least one Star Wars sequel, but it’s not the same situation. Besides, Moana, Coco and Frozen II thrived alongside Star Wars.

That’s… probably not happening. We’ve seen the week play out pretty much as expected since the $7.5 million Wednesday gross rolled in. A strong Thanksgiving day hold notwithstanding, Encanto played like a conventional Disney animated Thanksgiving weekend release albeit with around half the expected domestic earnings. So, barring a miracle, we’re probably looking at around half the expected domestic finish, maybe closer to $140 million than $120 million if fortune smiles accordingly over those first 31 days. Yes, this is a disappointing debut which will probably lead to a disappointing domestic finish, which could mean far more in this circumstance than “Gee, I guess there’s no Encanto 2.” Here’s hoping Pixar’s Turning Red can turn the tide next year.