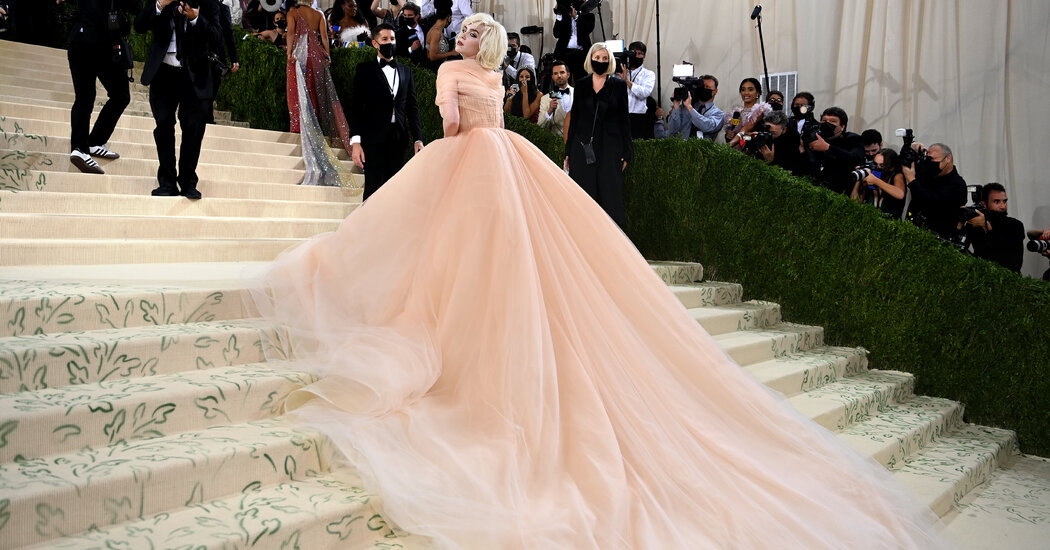 In the context of red carpets, it may seem strange to imagine that wearing a ball gown is a risky choice. But that’s how Billie Eilish saw it.

When Ms. Eilish, the 19-year-old goth pop star, decided to wear a nude tulle dress from Oscar de la Renta, “she was very interested in surprising everybody with a look she hasn’t done before,” said Fernando Garcia, a creative director for the label, describing the dress as “very clean and sensual.”

“It felt like a risk for her — it felt like something that made her nervous in a good way,” he said. “At the end of the day, she’s a girl, and she wants to look pretty.”

Ms. Eilish has never before worn Oscar de la Renta on a red carpet. She’s more of a logo fiend, opting historically for oversize and monochromatic pants-and-jacket sets by Gucci, Burberry and Chanel, and occasionally matching her clothes to her black-and-neon-green hair.

Except that Ms. Eilish’s hair hasn’t looked like that for quite some time. This summer, she introduced a new blond bombshell mien on the cover of British Vogue, wearing pink lingerie and nude latex. In her Met Gala debut, she sought out another traditionally feminine aesthetic, providing Oscar de la Renta with reference images of Grace Kelly and Marilyn Monroe during the design process.

“She was super excited to wear a beautiful gown,” said Laura Kim, the label’s other creative director — a statement that would have been somewhat unbelievable two years ago. But when she stepped on the museum’s red carpet Monday night as the youngest ever co-chair of the gala, Ms. Eilish looked every bit the glamorous starlet.

Her corseted gown had a gargantuan skirt with a 15-foot train. Seeing Ms. Eilish in such a grown-up ensemble, it’s easy to forget that she is still a teenager. When she first met the designers, she brought her mom, who took so many photos that her phone froze, Ms. Kim said.

Ms. Eilish is also perhaps the only Met Gala guest in history to elicit an ethical policy change from a company as a condition of wearing its gown to fashion’s version of the Super Bowl.

Oscar de la Renta will terminate all fur sales at the urging of Ms. Eilish, who is a vegan and animal rights activist. Mr. Garcia and Ms. Kim haven’t used fur in their designs for a few years now — ever since they told Alex Bolen, the brand’s chief executive, that they didn’t find fur chic, modern or relevant. Mr. Bolen disagreed, he said, but told them it was fine to stop using fur on the runway. The company still sold fur products in stores, however. While declining to provide figures, Mr. Bolen said fur made up a “meaningful amount of sales and profit” for Oscar de la Renta.

For years, Mr. Bolen has fielded pleas to stop using fur — including from his wife, Eliza, a longtime executive at the company, and his mother-in-law, Annette de la Renta (widow to Oscar), who told him the practice was barbaric.

Mr. Bolen mulled over but ultimately resisted these calls, until this summer, when Ms. Eilish’s team informed the company that she doesn’t work with brands in the fur business. He realized it might be the right time to stop.

“I thought a lot about what Oscar said — he was a big fan of fur, by the way — that the one thing he really worried about in the fashion business was his eye getting old,” Mr. Bolen said. It reminded him to listen to what young people, in particular, had to say. “I have to surround myself with people with different points of view.”

Ms. Eilish said in a statement to The Times that she found it “shocking that wearing fur isn’t completely outlawed at this point in 2021,” and “I’m honored to have been a catalyst and to have been heard on this matter.”